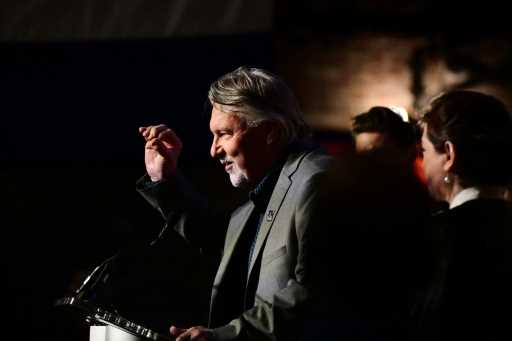 The Monday after the Colorado GOP’s state assembly in April, state Sen. Jim Smallwood wasn’t panicking. Sure, the event amounted to a celebration of election denial, but these gatherings attract die-hards who don’t represent the broader electorate, Smallwood said.

“There wasn’t a single statewide race that surprised me,” Smallwood, a more moderate Republican, said Wednesday morning after a Tuesday election that saw the most vocal Trumpists and aspiring subverters of democracy lose resoundingly.

Tina Peters, the indicted Mesa County clerk and nationally known Big Lie foot solider, was in third place out of three candidates in the GOP primary for secretary of state as of Wednesday morning. The winner of that race, Pam Anderson, raised less money, ran a fairly quiet campaign and unequivocally rejects baseless allegations of widespread voter fraud and stolen elections.

Ron Hanks, who rallied outside the U.S. Capitol on Jan. 6, 2021, is primed to lose by about 10 points to Joe O’Dea in the GOP race to unseat Democratic U.S. Sen. Michael Bennet. O’Dea does not believe the 2020 election was stolen.

The candidate contrast on the topic of elections was less black-and-white in the GOP race for governor between Heidi Ganahl and Greg Lopez. Lopez, who said he’d pardon Peters and that the 2020 election was illegitimate, was losing by about 7 points as of Wednesday morning. Ganahl, a University of Colorado regent, dodged questions about election denial for months leading up to the primary and specifically avoided criticizing John Eastman, the former CU visiting professor who was at the center of the coordinated attempt to keep Donald Trump in power after he lost his bid for a second term.

“I think it was a bad night for election deniers in Colorado, and I think that’s good for our democracy,” Bennet said in an interview Wednesday morning.

Democratic groups spent millions on ads and other content to boost the profile of Hanks and other election deniers, who conventional wisdom says would have been the weaker opponents in the general election. Bennet declined ahead of the primary to say whether he was OK with all that spending.

At a party in Denver Tuesday night to celebrate O’Dea’s win, state Rep. Colin Larson said, “The deniers, they’re loud, they get some good headlines, but they’ve never spoken for the majority of the party. (Voters) proved resoundingly tonight that Colorado Republicans want candidates who can win and candidates who are focused on fixing the economy and frankly the horrible mess Joe Biden has gotten us in over the last two years of his presidency.”

It is difficult, of course, to draw conclusions after the primary about what Colorado Republicans want. Unaffiliated voters, the plurality in Colorado’s electorate, are allowed to vote in either Republican or Democratic primaries. This is why Republicans like Smallwood and Larson, who aren’t election deniers, didn’t sweat after Lopez, Hanks and Peters owned the assembly.

“Time and time again, in both parties, the assembly and the grassroots efforts don’t necessarily reflect the desires of the majority of voters who, whether or not they’ve officially affiliated with a party, more often than not vote along a party line. Those people’s voices aren’t heard in assembly,” he added.

Denver Mayor Michael Hancock, a Democrat, told The Denver Post something similar: “These elections are broader now. … I think you’re seeing voters say moderation is really where we want to go, and we’re gonna try to pull people back to the middle — and I’m glad to hear that, quite frankly.”

That was the point of the 2016 voter-approved ballot initiative to allow unaffiliated voters to participate in political party primary elections. Moneyed interests that backed the measure hoped it would produce less extreme candidates in general elections and, for the most part, it has.

But there was at least one top-of-the-ticket race Tuesday night that countered the broader trend: U.S. Rep. Lauren Boebert, who tweeted “This is 1776” on the day of the U.S. Capitol insurrection, easily won the GOP nomination to represent western and southern Colorado in Congress. She defeated the much more moderate Republican state Sen. Don Coram, who raised far less money and didn’t start campaigning in earnest until recently. Boebert is likely to win a second term in November; her district was already conservative and became more so during a redistricting process that was meant to promote competitiveness but wound up protecting incumbent advantages in federal races.

Democratic state Sen. Kerry Donovan, who intended to face Boebert in November but who was drawn out of the race through redistricting, said she believes the Republican can be beaten.

“Any election is winnable with the right alignment and a national political climate,” she said.

But, she added, “I think Colorado progressives should really come to terms with what the redistricting process resulted in and for those of us on the Western Slope and in southern Colorado, it sort of feels like the political process wrote us out of the picture.”

Having failed in their effort to place an election denier or two atop the ticket in the hopes of dragging the GOP ballot down, Democrats looking toward November wasted no time framing headlining Republicans as extremists.

“Both (Hanks and O’Dea) said they would vote to confirm Donald Trump’s Supreme Court nominees, who have overturned Roe vs. Wade — nominees that I voted against,” Bennet said. “And the guy that I’m running against now says that he opposes Colorado’s law protecting Roe vs. Wade. So I think those are not tenable positions in the general election in Colorado.”

Minutes after Ganahl’s victory was called, the Colorado Democratic Party posted a video ad calling her “too radical.”

She isn’t an all-in election denier, but she opposes abortion rights and denies climate science, among other conservative positions. At her party Tuesday night, a jubilant Ganahl told The Denver Post that Democrats erred in propping up Lopez during the primary and misread the electorate.

“The people of Colorado aren’t going to put up with elections being bought anymore,” she said.

Nick Coltrain and Jon Murray contributed to this report.