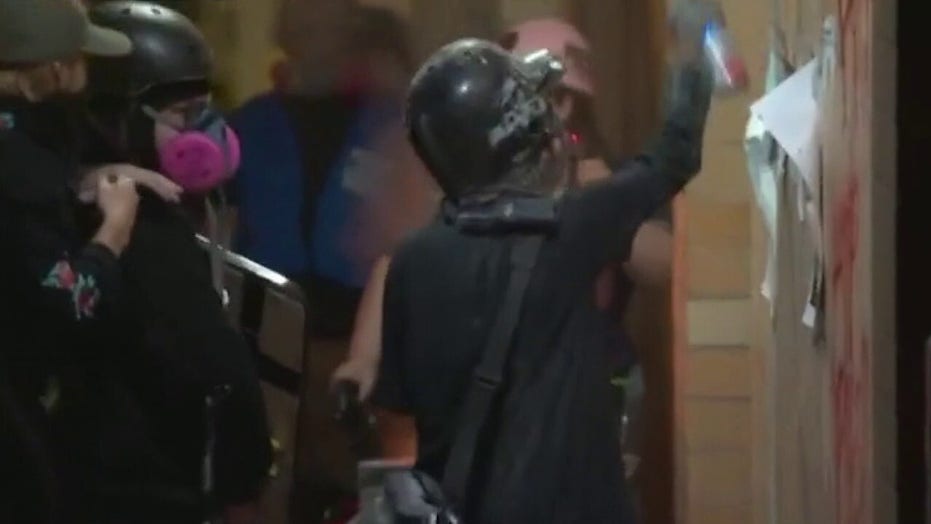 DNC speakers fail to condemn violent protests on night one

Former DNC deputy press secretary Jose Aristimuno says Democrats have made it clear they are against violence and for peaceful protests.

Mayors Lori Lightfoot of Chicago and Muriel Bowser of Washington, D.C., headlined a portion of the Democratic National Convention (DNC), discussing police reform and racial injustices against Black people, but critics pointed to both their handlings of recent protests in their own cities that some say contradict Monday night's message.

"It's about economic empowerment," Lightfoot said during a DNC panel with presumptive presidential nominee Joe Biden. "Because if people are lifted out of poverty and they are given an opportunity to feel a stake in their own future, that goes a long way."

Lightfoot's city has faced ongoing unrest and demonstrations with calls to defund the police, even as homicides and shootings nearly doubled from the same time last year.

Lightfoot announced last week that she would be forming a task force to monitor activists' social media prior to protests to glean tip-offs of potential looting or nefarious activity and condoned the use of tear gas on looters.

The decision follows a police shooting of a Black man in the city's South Side that prompted large crowds of people to go into the Chicago’s upscale shopping area, where they smashed windows of businesses and took merchandise from stores.

Business owners have accused Lightfoot of not doing enough to prevent violent crime as an offshoot of otherwise peaceful demonstrations, while protesters decry her inaction on ending police brutality in the city.

Meanwhile, Trump has seized on the situation in Chicago as a talking point of his reelection campaign, telling a crowd in Wisconsin Monday: “In Chicago, they literally raised up the drawbridges to prevent hordes of rioters from ransacking the city. Can you believe it?” he said, referring to Lightfoot’s security precautions against looters.

“This is the future that Joe Biden plans to bring to every city, town and suburb in our nation,” Trump added.

At Monday night's virtual convention, Biden was careful not to explicitly express support for defunding the police but still insisted that reforms in policing are needed.

“Most cops are good,” Biden said. “But the fact is that the bad ones have to be identified, and prosecuted, and out period.”

Meanwhile, Bowser of D.C. — who also has refused calls to defund the police — made remarks in front of the newly renamed Black Lives Matter Plaza. The area previously known as Lafayette Square has been the scene of brutal clashes between protesters and police over the last three months. Bowser called for the nation to "come together."

"Together, we can turn this reckoning into a re-imagining of a nation," she said.

"While we were peacefully protesting, Donald Trump was plotting," Bowser said. "He stood in front of one of our most treasured houses of worship and held a Bible for a photo op. He sent troops in camouflage into our streets. He sent tear gas into the air and federal helicopters, too. I knew if he did this to D.C., he would do it to your city or your town.