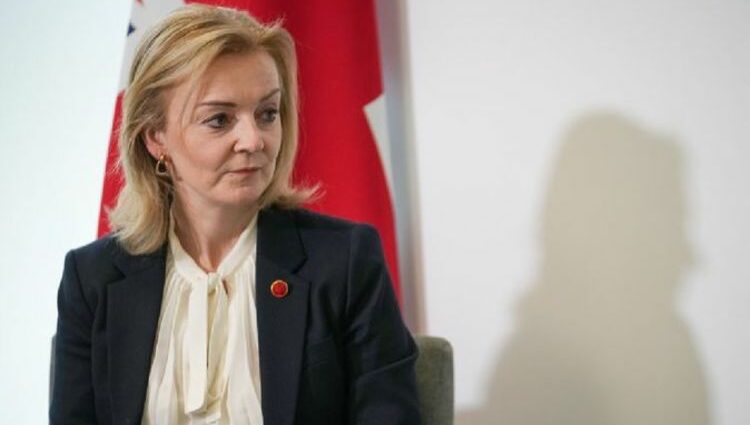 Brexit superwoman Liz Truss, who has already nailed down post-Brexit trade deals with Japan, Australia and New Zealand, will take the reins as chief negotiator on the Northern Ireland protocol.

He added how Ms Truss is someone who as been “in the ascendency within the Conservative Party” in recent years.

Mr Powell added how Ms Truss is “is seen as someone quite popular.”

But he stressed Mr Johnson was aware of the need to put a fresh face in Lord Frost’s job who is “a safe pair of hands” for backbench MPs.

JUST IN Truss to the rescue on Brexit: Foreign Sec parachuted in for EU talks after Frost departs

The Sky correspondent stressed Ms Truss is also unlikely to be a “softer touch than Lord Frost” in the crucial new role.

He said this will reassure Tory MPs who have been up in arms at Mr Johnson over other issues, including COVID-19 restrictions and the rule breaking Downing Street parties.

Mr Powell noted Ms Truss will likely “go down quite well with that wing of the Tory pary”.

Lord Frost is understood to have tendered his resignation earlier this month to Boris Johnson after failing to throw his support behind a raft of Conservative Party policies.

Australia delighted over the benefits of Brexit Britain deal

The Mail on Sunday, who reported his resignation on Saturday evening, claimed Lord Frost was a heavy critic of vaccine passports and the move to implement high taxation in Britain.

The newspaper also reported that Mr Johnson urged Lord Frost to stay in his role until January.

It is understood Mr Johnson told the former chief Brexit negotiator the Government would be unable to take another crisis of such magnitude and pleaded with Lord Frost to extend his notice period.

Despite this, he stressed that “the challenge for the Government now is to deliver on the opportunities it gives us”.

Following Lord Frost’s exit, one EU official told the Guardian: “Lord Frost never got Brexit done; he actually made sure it endured using the Northern Ireland protocol to get his way.

“But one year on from the deal he negotiated, what did it bring the UK? Apart from mistrust and deteriorated relationships with most member states?”

Political commentator Emma Webb told GB News on Sunday she believes Lord Frost is “right at the very top” of potential candidates to takeover from Boris Johnson as Prime Minister.