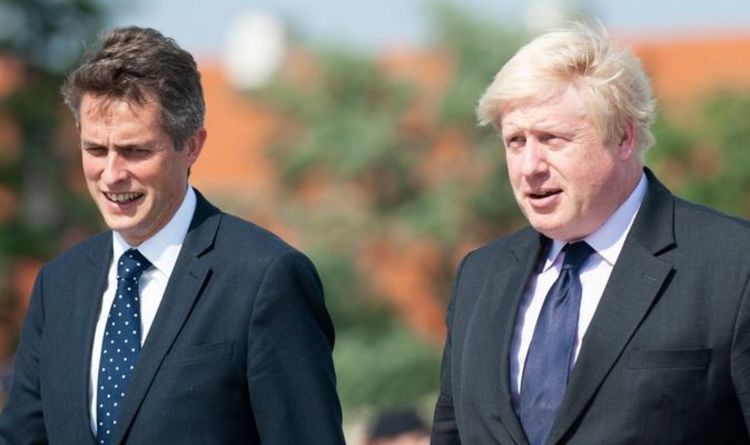 Kemi Badenoch, an equalities minister who is also part of Chancellor Rishi Sunak’s Treasury team, is being lined up for a key role in Boris Johnson’s next Cabinet reshuffle, The Times has reported, citing “multiple sources”. Mr Williamson is understood to have been facing a growing backlash from some Conservative Party MPs, who are not happy with his performance after a number of apparent errors in his role during the Covid pandemic.

But as part of attempts to avoid being completely ousted from the Cabinet, the Education Secretary is reportedly telling colleagues he “knows where the bodies are” in what could be seen as a veiled threat to Mr Johnson.

One MP told The Times he has recently been pitching himself as Leader of the House Commons, a role currently held by Jacob Rees-Mogg, in a desperate attempt to remain in the Prime Minister’s top team.

A Conservative MP told the newspaper: “He is wetting himself about getting the sack. He keeps telling people he knows where the bodies are and [the] PM is too weak to sack him.”

Mr Williamson’s allies added he had been assigned one of the most difficult jobs in Government, responsible for guiding the education sector through the pandemic through making some challenging decisions.

He has been Education Secretary since July 2019 outlasting the average incumbent’s two years in a post over the past decade.

The Cabinet minister also ran Mr Johnson’s leadership campaign that year and prior to that served as Government Chief Whip.

However, Mr Williamson is unlikely to be replaced anytime soon as the Prime Minister is reported to unlikely reshuffle his Cabinet until January at the earliest.

But Douglas Smith, who has been a Tory “fixer” for three decades and was recently brought into the Government’s top team, is rumoured to be pushing for 41-year-old Ms Badenoch to become the next Education Secretary in the revamp.

Mr Smith, who is the Downing Street Policy Director, is said to have a key influence in putting together the Government’s stance on “woke” issues such as race, trans rights and attacks on historic statues.

Potential replacement Ms Badenoch is also said to have impressed him and others in the Tory hierarchy, according to The Times.

The equalities minister entered Parliament during to 2017 general election after winning the Conservative seat of Saffron Walden, in Essex.

On Tuesday, Mr Williamson faced embarrassment after claiming he could not remember his A-level grades – the same day millions of students received their results.

He said: “It was a long time ago,” before adding it was “fair to say” he did not get three A*s.

When asked if his results were a secret, the Education Secretary replied: “It absolutely is! I’ve forgotten, it’s 27 years ago.”

The latest rumours of a Cabinet reshuffle come with universities set to ignore a demand from Mr Williamson for a return to face-to-face lectures with their students.

The Education Secretary said he wanted to end learning by the popular online video calling service Zoom, with “all universities having students in their lecture theatres” from October.

He is also expecting the Office for Students (OfS) to investigate any institution that failed to return to pre-pandemic teaching levels.

But the Russell Group and Universities UK have made clear they will not enforce the demands from Mr Williamson.

They believe a hybrid model is more appropriate and that lecture theatres could continue to pose a risk of Covid transmission.

The regulator added if a university could show it was providing a “good quality experience of higher education”, it would not be breaching any rules, “however teaching is delivered”.