WASHINGTON — As it reaches out to allies rattled by four years of erratic American diplomacy, the Biden administration wants to enlist Congress in advancing foreign policies that will withstand the whims of any single president.

An early test lies in the fate of what is known as the Mexico City policy.

Enacted in 1984 by Ronald Reagan, the policy bans U.S. taxpayer funds for health providers overseas that, as part of their medical care for women, offer abortion services. It has been rescinded by every Democratic president since, only to be put back into place by every Republican.

Even when the ban is rescinded — as President Biden did on Jan. 28 — the money cannot be used to pay for abortions.

Instead, and by law, it is used to pay for other health care for women and girls in some of the world’s poorest nations, allowing providers to cover abortion costs with other resources. But whenever the ban is restored, humanitarian groups that are backed by the United Nations and the United States Agency for International Development must scramble for other support to cover health care costs.

The constant churn has thrown medical budgets into disarray and forced the shuttering of some clinics.

Crucially, it also has reinforced the notion among some foreign allies of America as an unreliable partner on global needs.

Charles Michel, the European Council president, said on Wednesday that he hoped the Biden administration will work more closely with international partners on a range of issues, in contrast with what he described as a “difference with the last years.”

Under President Donald J. Trump, the Mexico City policy was not only enforced but expanded, denying aid to additional groups that also provide H.I.V. medicine and tuberculosis treatment. That served as further injury to the insult of American retrenchment from global alliances under Mr. Trump’s watch, on everything from military conflicts to diplomatic accords, which the Biden administration now wants to reverse.

Last month, on his first full day in office, Secretary of State Antony J. Blinken said the Biden administration would turn to Congress to help cement a host of major foreign policy decisions to provide continuity from president to president.

“It is hard to have a sustainable foreign policy absent the informed consent of the American people,” Mr. Blinken told reporters on Jan. 27. “The place that, in our system, that informed consent is vitally important, is with Congress.” 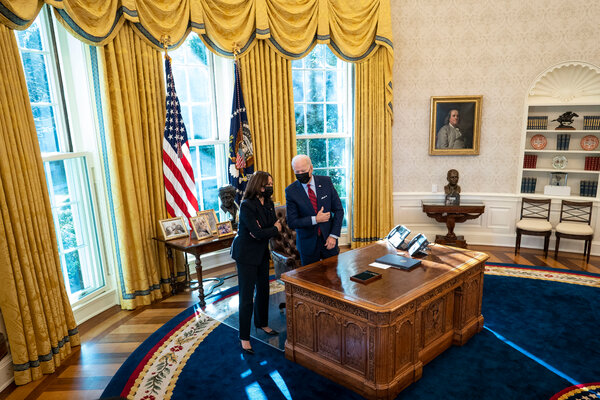 Mr. Biden lifted the Mexico City policy a day later, releasing access to hundreds of millions of dollars in aid to health clinics that had been denied the funding, and pleasing diplomats around the world.

“Norway is looking forward to work closely with the USA again in the global effort” to protect the reproductive health of women and girls, Foreign Minister Ine Eriksen Soreide said on Twitter.

Experts said members of Congress who oppose the Mexico City policy — mostly Democrats and abortion rights activists — have a narrow but rare opportunity to abolish it.

The Democratic House previously approved a measure to block the policy, also known by critics as the global gag rule, but it was stalled under Republicans in the Senate.

This month, Democrats reclaimed control of the Senate for the first time since 2015 by the slimmest of margins, with a 50-to-50 split and Vice President Kamala Harris able to break tie votes.

However, at least two Republicans, Senators Susan Collins of Maine and Lisa Murkowski of Alaska, also support legislation to permanently end the Mexico City policy, meaning “there might be a newer window to make something happen,” said Jen Kates, the director of global health and H.I.V. policy at the Kaiser Family Foundation.

“I think everyone will agree, whatever side they’re on, on the issue, is that the Ping-Ponging is a very challenging way to have this policy operate,” Ms. Kates said, discussing the work of nongovernmental organizations. “It provides no stability or predictability for N.G.O.s, and it’s disruptive.”

Opponents of abortion rights also want to see the matter become settled law, but in a way that enshrines the Mexico City policy to immediately prevent Mr. Biden and future presidents from supporting abortion providers abroad.

Last month, Senator Mike Lee, Republican of Utah, revived a plan he had introduced in previous congressional terms to make the funding ban permanent. In a Feb. 3 speech on the Senate floor, he said it was necessary to prevent the policy from being “rescinded and reinstated again and again between changing administrations.”

“The lives of babies and the dignity of women are not political footballs,” Mr. Lee said. “Women and unborn children everywhere have immeasurable dignity and worth, regardless of where they are from. And they ought to be entitled to the right to life and protection from harm — regardless of who is in office.”

His remarks drew an exasperated response from Senator Jeanne Shaheen, Democrat of New Hampshire, who reminded officials that overseas health providers can use U.S. funds only for other medical needs — not to pay for abortion services, including counseling.

So far, she said, 47 senators have committed to a proposal that would rescind the funding ban for good. Other Democrats are expected to join the effort.

“We need a renewed commitment to comprehensive family planning,” Ms. Shaheen said, one that “would ensure that care is not limited, based on the president in the White House.”

Ms. Kates noted that whatever Congress approves as law when it is controlled by Democrats could, in theory, be reversed when Republicans again take over. “This is contested space,” she said.

But she also predicted that Ms. Shaheen’s legislation, if enacted, would have “more of a protective frame around it” because it would change a 60-year old law that governs how the United States provides foreign assistance, as opposed to amending a spending bill that is debated every year.

No other country in the world withholds health care support from United Nations programs over opposition to abortions.

In 2016, before Mr. Trump cut the funds, the United States provided $69 million to the U.N. Population Fund, the world body’s leading provider of family-planning services. With the money restored, the agency projects it could provide family planning and health care to 4.2 million women and girls within one year, potentially preventing 1.4 million unintended pregnancies and 640,000 transmissions of sexually transmitted diseases.

Natalia Kanem, the U.N. agency’s executive director, described a mix of joy and relief among member nations upon hearing this month that the United States would restore funding to foreign providers. In an interview, she was careful not to discuss the internal American political debate over whether Congress should put the seesawing U.S. policy to rest.

But she said the coronavirus pandemic and poverty and strife in some of the world’s most unstable countries underscored that “we don’t just need to get back to where we were four years ago, or 20 years ago.”

Given the unpredictability of international support that has led to dwindling health services for women and girls, American officials should pursue “something with ambition, rather than just tinkering around the edges,” Ms. Kanem said.