President Donald Trump Tuesday morning thanked himself for a stock market that has been mostly clambering to new heights.

The 45th president via Twitter touted the buoyancy of the equity markets, saying: “Stock Market is heading for one of the best months (June) in the history of our Country. Thank you Mr. President!”

That said, the climb for the S&P 500, which posted a record last Thursday — its first since April 30 — and the rally in other large-capitalization stocks, including the Dow industrials and the technology-laden Nasdaq Composite Index COMP, -0.93% belies the performance for significant benchmarks, which have been left behind in the equity run-up. That includes the closely watched Dow transports, among others.

Those areas of weakness may signal that all isn’t picture perfect in the investing landscape here and abroad. Investors are wrestling with a Trump-triggered trade clash between the U.S. and China, and signs of receding global growth amid fears that an economic slowdown will take hold domestically after what is likely to be a record period of expansion.

“I definitely do worry about the economic indicators and I do worry that transportation is not supporting this last leg higher,” said Diane Jaffee, senior portfolio manager at TCW, told MarketWatch in a phone interview.

Here’s a look at some of the major index and asset laggards as well as outperformers:

On Monday, a popular benchmark for small-capitalization focused stocks rang up the worst day since May 31, down 1.3%, as most of the major benchmarks delivered lackluster to flat returns on a listless day of trade. The loss for the Russell highlights the group of stocks that have substantially lagged behind their large-cap brethren. So, while the S&P 500 index is fresh off the heels of a record, the Russell 2000 is off more than 12% from its Aug. 31 record, qualifying the index for what technical analysts on Wall Street define as a correction. 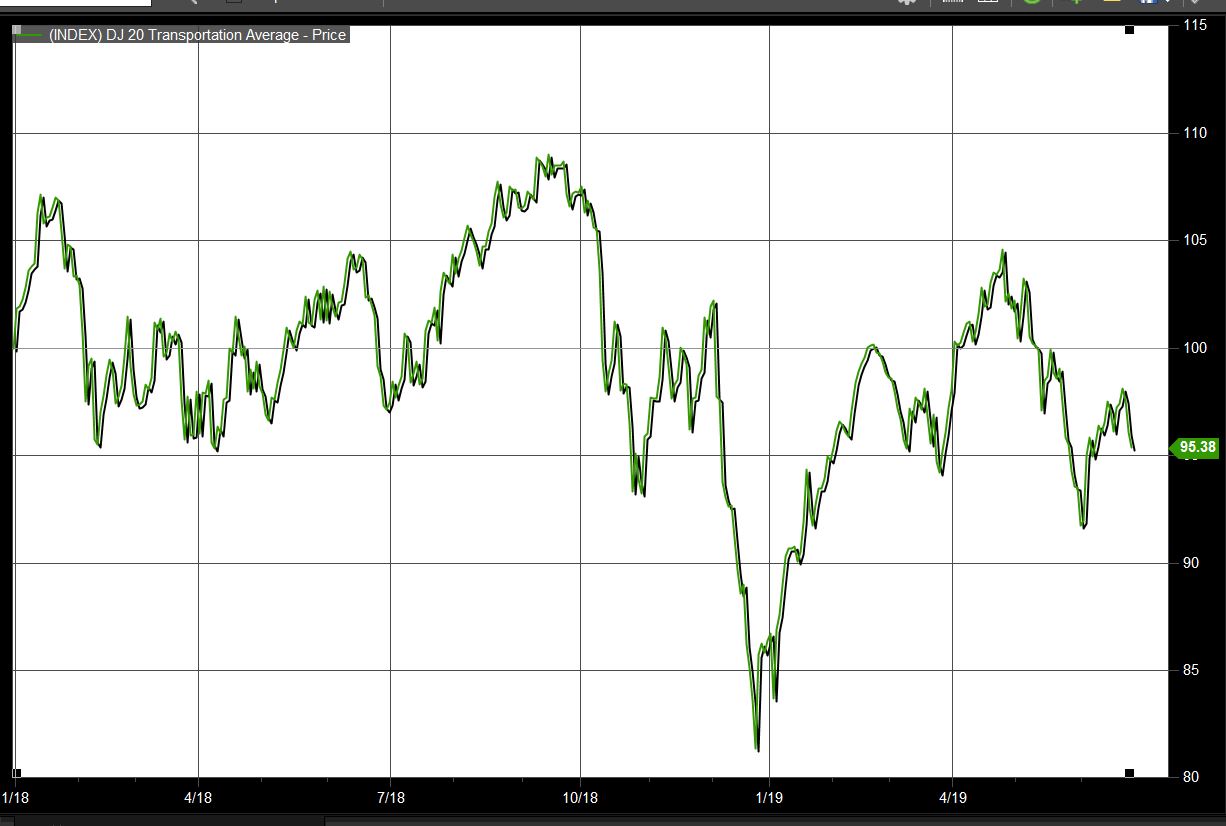 The Dow Jones Transportation Average DJT, -0.69% meanwhile, slumped 1.5% on Monday, with the transportation average off nearly 12% from its recent Sept. 4 peak. The gauge reflects the share performance of a basket of airline, railroad and shipping companies, with the thinking going that this segment of the market is a barometer of the health of the wider economy.

MarketWatch’s Tomi Kilgore says the transports are believed to have a symbiotic relationship with the blue-chip Dow industrials, as the 20 transports components are seen as “taking” what the 30 members of the industrials produce. Underperformance there may signal that the economy isn’t firing on all cylinders even if other more closely watched benchmarks punch higher. 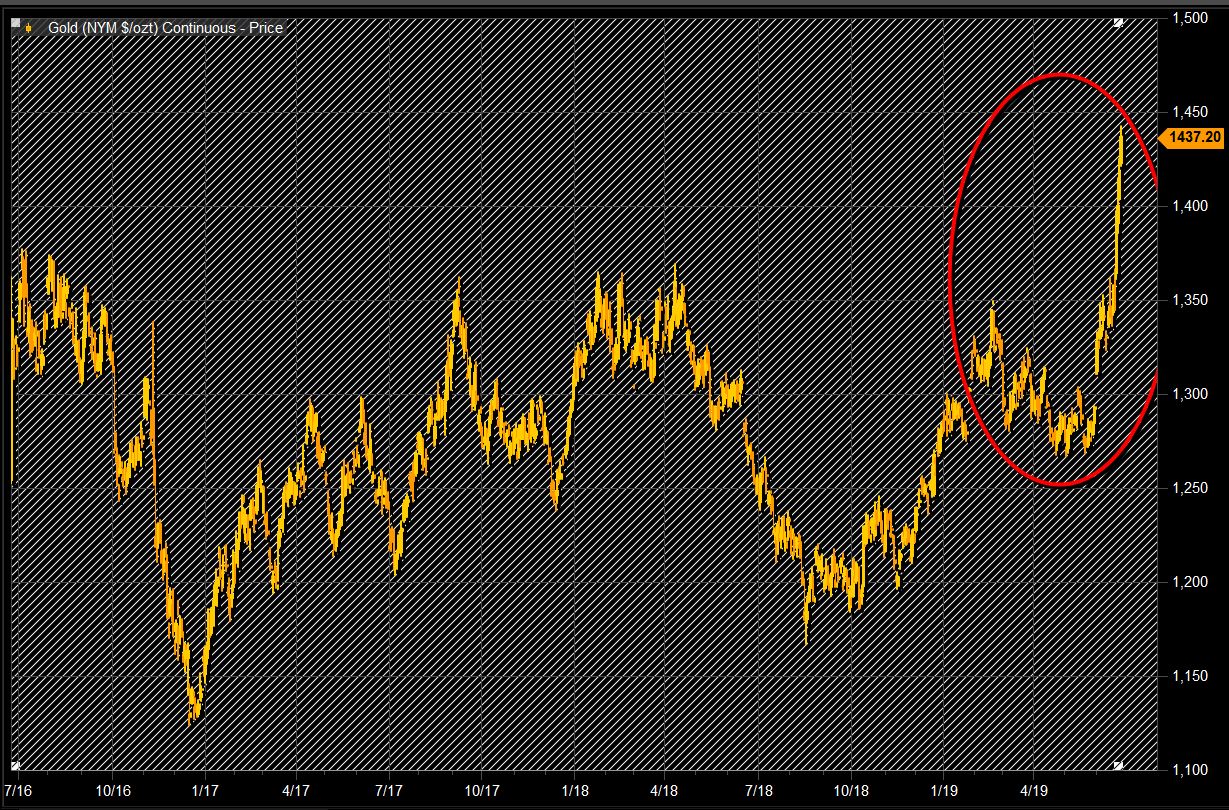 August gold, the most-active futures contract for the commodity, is on pace for its highest settlement since May 19 of 2013. Looked at another way, gold is up more than 20% from its low of $1,184 an ounce, put in on Aug. 16, according to FactSet data. To be sure, gold is responding to a combination of factors that have given it fresh life since languishing at around this time last year. The dollar has weakened helping to lift assets priced in the currency, making them more attractive to buyers using other monetary units. But a major catalyst has been global central banks which have signaled that easy-money policy is back in effect, driving debt yields, which move in the opposite direction of prices, to multiyear lows.

Check out: Fed holds interest rates steady — but it leaves itself plenty of wiggle room by removing ‘patient’ pledge 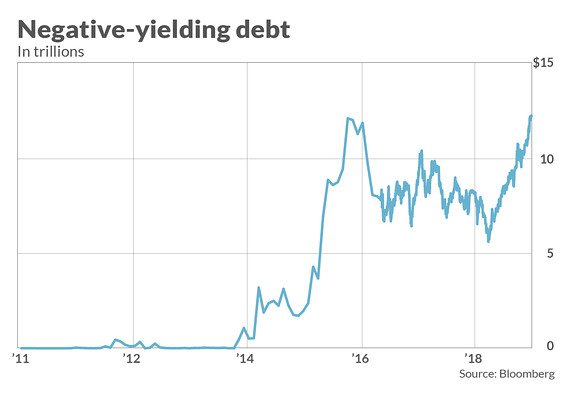 The total amount of debt with yields below zero earlier this month hit a record of $13 trillion. The ballooning value of subzero-yielding debt reflects how global bond markets continue to attract inflows from jittery investors who appear to be buying bonds in reaction to fears of a broad economic slowdown.

Yields for the German bonds, known as bunds, fell to a record low at negative 0.333% on Tuesday. Germany’s debt is often viewed as a proxy for the health of the eurozone because the country represents that largest economy in Europe.

Incidentally, the meager bonds yields across the globe, with the 10-yeat Treasury note rate TMUBMUSD10Y, -1.24% at around its lowest level in more than two years below 2%, also have supported bids for gold, which doesn’t offer a coupon. 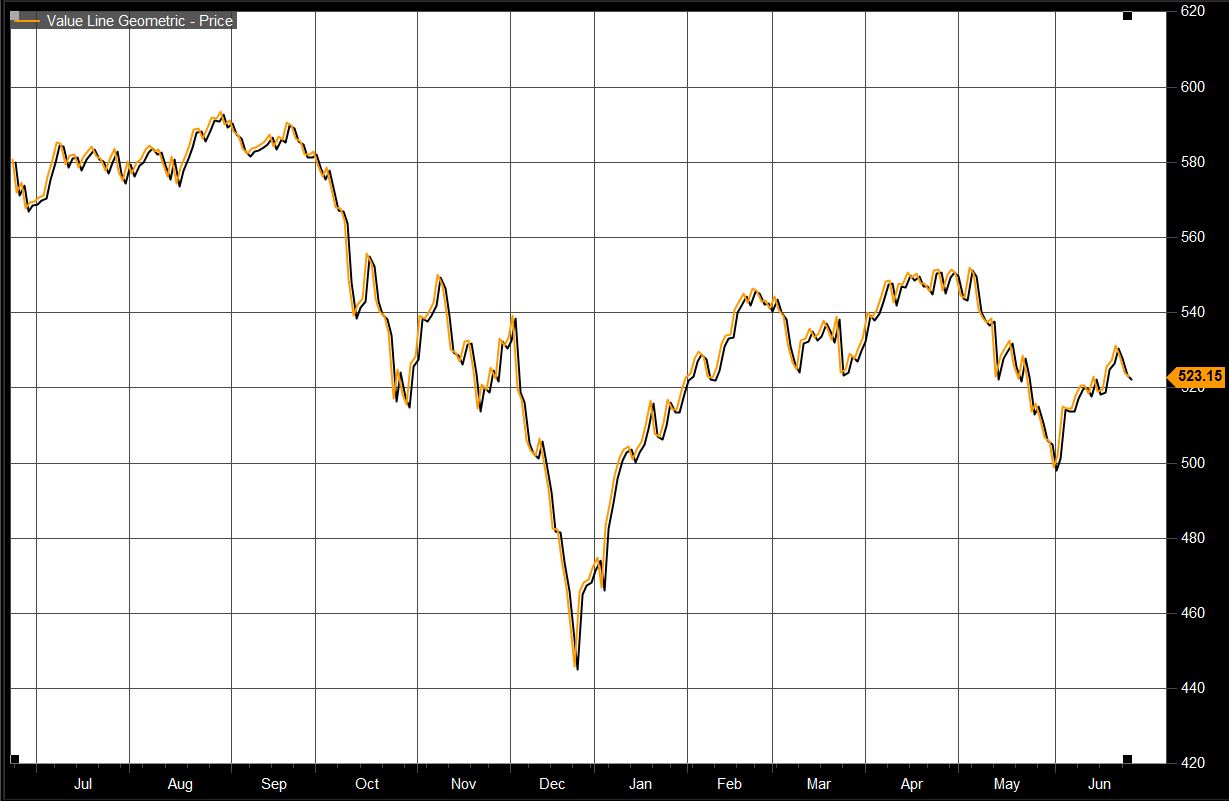 The Value Line Geometric Index VALUG, -0.06% which tracks the move of a range of stocks and is equal-weighted, is nearly 12% off its Aug. 29 all-time high.

The Value Line is used by many technical analysts as a measure of broad-market participation, or breadth, especially during big moves. Indexes like the S&P 500 and Nasdaq, conversely, are market capitalization-weighted, so large companies like Apple Inc.AAPL, -0.70% , or Amazon.com Inc.AMZN, -1.17% have a stronger influence on those benchmarks.

Economic survey data and gauges of sentiment have been terrible.

Last week, the New York Fed’s Empire State business conditions index registered its largest-ever drop into negative territory. Separately, the IHS Markit said its flash manufacturing purchasing managers index dropped to 50.1 in June from 50.5 in May, the worst reading since September 2009. And the flash services purchasing managers index in June fell to 50.7 from 50.9, the worst reading since March 2016.

On Tuesday, a gauge of consumer confidence fell in June to the lowest level in almost two years.

Lates News:
2019-06-25
Previous Post: Trump says an Iranian attack on anything American will be met with 'obliteration'
Next Post: Top Congressman Writes To Pompeo On Concerns Over India Ties