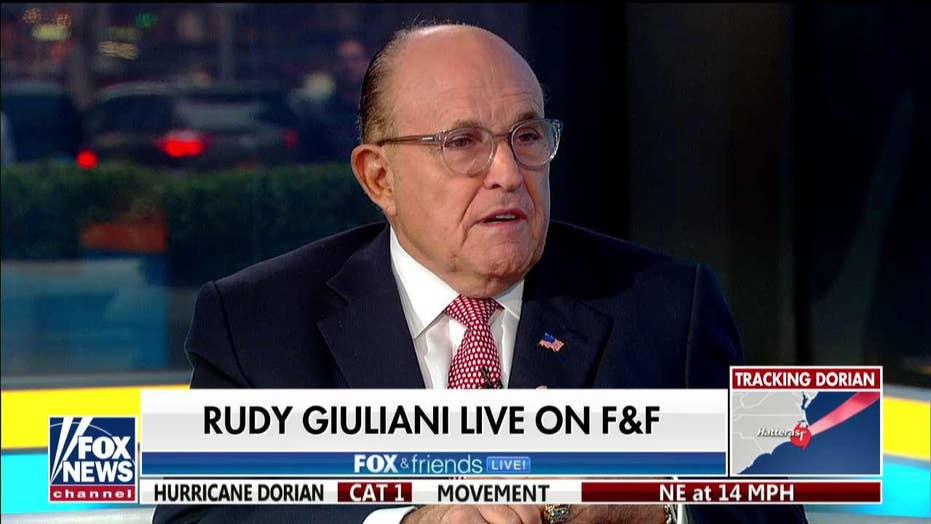 BIDEN DEFENDS SELF WHEN PRESSED BY COLBERT ABOUT GAFFES

Giuliani said during his administration police officers were directed to intervene and offer to bring people to homeless shelters.

He said he disagrees with his mayoral successor, Michael Bloomberg, on many political issues but credited him for turning over to de Blasio the "best-run city" in the country.

Host Brian Kilmeade asked Giuliani about de Blasio's claim that he has improved the city since taking office in 2014.

"He must be smoking something," Giuliani jokingly responded.

De Blasio appeared Thursday on "Tucker Carlson Tonight," where he was pressed by Carlson on his floundering presidential campaign, his push for gun control and much more.

He said he plans to stay in the 2020 Democratic presidential race, with the goal of making the October debate stage.

"I've said very clearly my goal is to get into those next debates — and that's a month away until that cut-off period," he said. "I'm going to put ideas out there that I think are going to be meaningful for people. Even a $1 donation helps me to get into the next debates."

The New Yorker added that his experience running America's largest city is good grounding for the skills needed to execute the office of the presidency.

He cited what he considered "real, serious foundational changes" in New York and likened his current role to that of a chief executive.

A recent New York Post article claimed de Blasio spent only seven hours at City Hall in the month of May, when he launched his presidential campaign.