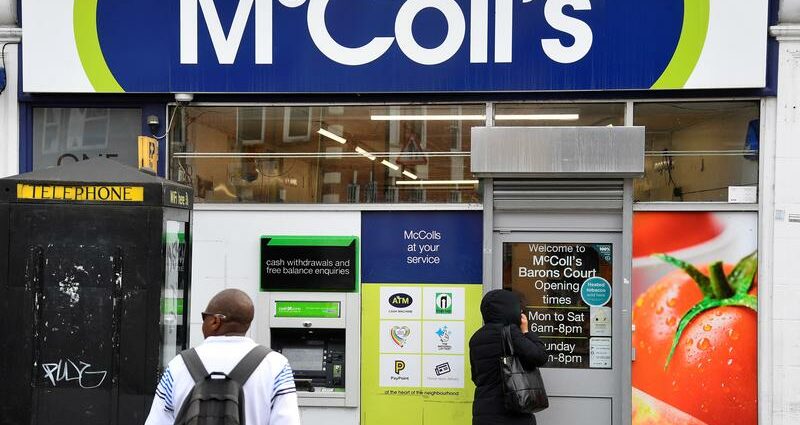 (Reuters) – The owners of British supermarket group Asda are set to buy McColl’s out of administration, saving around 16,000 jobs after the convenience store chain’s lenders rejected a rescue deal from Asda’s rival Morrisons.

People with knowledge of the situation said on Friday that EG Group, the petrol station and food retail business owned by brothers Zuber and Mohsin Issa and private equity group TDR Capital, was set to agree a deal as soon as Monday.

The deal will keep on all McColl’s stores and staff with higher pay for many, but will not include its pension scheme, they said.

EG Group declined to comment. The Issa brothers and TDR also own Asda. EG and Asda are run as separate businesses.

McColl’s runs 1,100 stores, including convenience outlets under its own name and Morrisons Daily, as well as Martin’s newsagents. Around 6,000 of its staff are full-time.

The company earlier announced it was going into administration, a form of protection from creditors, appointing PriceWaterhouseCoopers (PWC) as administrators.

It said that while talks with Morrisons, with which it has a wholesale supply deal, had progressed, “the lenders made clear that they were not satisfied that such discussions would reach an outcome acceptable to them.”

McColl’s, which has just under 170 million pounds ($210 million) of debt, said it expected PWC to sell the business as soon as possible.

Sky News first reported that EG was expected to seal a deal.

Morrisons said its proposal would have preserved the vast majority of jobs and stores, as well as protecting pensioners and lenders.

“For thousands of hardworking people and pensioners, this is a very disappointing, damaging and unnecessary outcome,” said a Morrisons spokesperson of McColl’s move into administration.

McColl’s requested the London listing of its shares be suspended with immediate effect. Shareholders had already seen the value of their investment virtually wiped out over the last year.

McColl’s, which has suffered from availability issues and patchy trading, had been in talks with lenders for weeks to try to resolve funding issues.

Morrisons’ deal with McColl’s has seen over 200 stores converted to Morrison’s Daily with a target of 450 by November 2022. Morrisons’ 2021 annual report put its potential exposure to its McColl’s contract at 65-130 million pounds.

Smiths News, which supplies McColl’s with newspapers and magazines, said the retailer represented a bad debt risk to it of 6-7 million pounds, with 1.2 million pounds being overdue.