The financial regulator has signalled the cap on banks' dividend payments might be scrapped as the country's economic outlook improves, sparking a jump in share prices of the big four lenders.

Australian Prudential Regulation Authority chair Wayne Byres told the Australian Financial Review's banking and wealth summit on Tuesday the regulator could revisit its restrained dividend guidance as the economy bounces back from the initial coronavirus shock.

"We have deliberately never put in place guidance for a long period of time," Mr Byres said. "Obviously we will be minded how the situation has evolved. On the whole, I think the outlook has improved, bank capital has certainly increased, the economic situation looks more positive.

"I think it is time we look at the issue again." 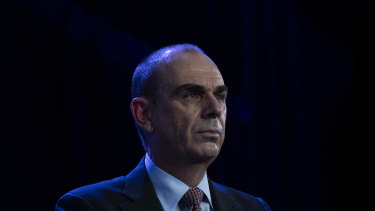 APRA issued a stark order to banks in April, directing boards to "seriously consider" suspending dividend payments as the federal government enforced mandatory lockdowns in all states to curb the spread of COVID-19. Three months later, APRA loosened its guidance telling banks and insurers they could resume dividends but limit payments to a maximum of 50 per cent of profits.

I think it is time we look at the issue again.

The big four banks were contacted for comment but none would speculate on APRA's guidance before any changes were formally announced.

Plato investment managing director Don Hamson said Mr Byres' indication the dividend cap might expire by the end of the year was "certainly good news", especially for retirees living off their super savings and investments.

"It's increasingly important for retirees," Mr Hamson said. "They're getting squeezed from all sides. The RBA signalled the cash rate will be zero for the next three years so this is very important."

"Whether [Mr Byres] comes through with it or not, is the question."

However, ratings agency S&P Global said next year "may be even tougher" for banks once government stimulus payments taper off, putting potential pressure on their loan books.

"The expected progressive withdrawal of such support in 2021 will reveal a truer picture of underlying bank asset quality, even as economies start to recover," S&P Global Ratings analyst Gavin Gunning said.

Association of Independent Retirees president Wayne Strandquist said older Australians had been hit with a "triple whammy" – low interest rates on their cash savings, stalled rental payments for their investment properties and cancelled dividends for their stocks – and would welcome a return to full dividend payments on their bank shareholdings.

"They've seen a significant drop in income this year, so [they] would be very relieved to hear [APRA] are contemplating lifting the cap," Mr Strandquist said.