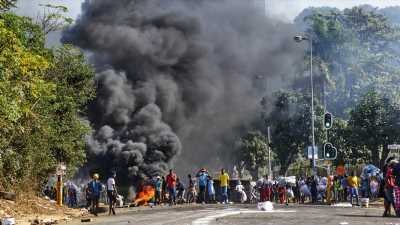 The images flooding out of riot-torn South Africa are horrifying. On Tuesday, a woman in a high-rise building apparently set alight by looters tossed her child to the hoped-for safety of a crowd far below. Emergency workers have been attacked in several places; one medical service began transporting the injured in an armoured ambulance. In much of the central district of the port city of Durban, the police were overwhelmed and shopping malls and stores were gutted.

The nation’s president, Cyril Ramaphosa, warned against ethnic conflict, a threat his critics called groundless and that only increased tensions.

But as I swiped through the pictures and videos flying across my South African relatives’ group chats this week, I was struck by the many posts that suggested an even bitterer flavour of doom — a kind of psychological crackup. 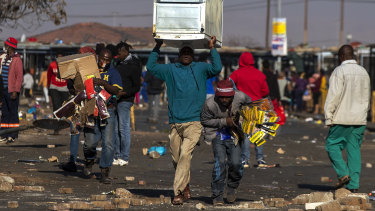 What began last week as scattered protests over the jailing of Jacob Zuma, the nation’s former president, has turned into a plunder free of meaning and intention, so indiscriminate that it seems almost cathartic. On Monday, just as Ramaphosa promised in a droning national address to get tough on looters, a split-screen showed a crowd meeting no resistance as they broke into a bank — but not an ordinary bank, a blood bank. All the while nobody seems to know what’s actually happening, as misinformation rockets through a locked-down, screen-dependent population.

South Africa has been a very fragile nation for a very long time — a place of persistent economic struggle and breathtaking inequality, intolerable violence, and racial animus still lurking beneath every national controversy. (Sound familiar, America?) But until this week I had never seriously entertained the idea that the place might suddenly fall apart. As was evident in the country’s bloodless handover from racist rule, troubled as it has been, there was a fundamental social stability undergirding South African society that I believed would hold.

But now it looks as if something key has been lost. The coronavirus may have dealt South Africa a blow that even AIDS could not, driving the country of my birth down the path of madness, a society slumping into the abyss.

This isn’t just their problem. Because the virus respects no borders, it’s ours, too. But it’s also important to remember that how we address today’s pandemic will have consequences for the many global threats to come.

The possibility of such collapse terrifies me — not just as a native South African, but as an American. Thanks to mass vaccination, it’s beginning to feel like morning in many wealthy parts of the world, notwithstanding the social and political dislocations the virus has created in the United States. But on much of the rest of the planet it is still dark night.

What is happening in South Africa is different from what’s happening in Haiti, whose president was assassinated last week; or in Cuba, where thousands took to the streets in protest over rising poverty and state indifference; or in Colombia, Brazil, Lebanon and other places where protests and unrest have flared up in recent months. Yet there is an obvious common thread that suggests a systemic failure — a pandemic that refuses to abate is ripping societies apart. The coronavirus has gutted economies, depleted social, medical and security services, corroded trust and created opportunities for rampant violence and political persecution. And in the absence of effective vaccination programs, there isn’t any room for hope, either.

“These are fragile places with many underlying vulnerabilities,” said Masood Ahmed, president of the Centre for Global Development, a nonprofit that aims to reduce poverty in developing nations. “That is what we need to worry about — as the months wear on, you’re going to see a lot more countries where trust levels and tolerance will start fraying.”

This isn’t just their problem. Because the virus respects no borders, it’s ours, too. But it’s also important to remember that how we address today’s pandemic will have consequences for the many global threats to come. If the billions of people in the world’s middle- and low-income countries continue to feel hopelessly locked out of any chance at liberation from the virus, what will happen as the world is transformed by climate change?

Global poverty has declined significantly over the last 40 years — but because climate change could pose severe threats to Africa and South Asia, where most of the world’s poorest people live, the World Bank warns that, without swift action, it will be extremely difficult to further reduce extreme poverty.

Among scholars of development, there remains a great deal of debate about the effectiveness of international aid to address international problems. But as Ahmed pointed out, in the case of COVID-19, what the wealthy world owes the developing world is not any kind of mystery. The fix for South Africa’s most pressing threat is the same as the solution to ours: a well-organised, well-funded mass vaccination program.

What’s missing is global leadership and determination — a serious effort by the international community, with the United States in the lead, to rid the planet of any place where the virus might thrive. Think the Berlin Airlift or the Marshall Plan, but for vaccines.

And things are urgent. The coronavirus has reversed decades of progress on global development. The number of people experiencing hunger shot up by hundreds of millions last year, the most since at least 2006. Global peacefulness declined for the ninth year in a row, with a marked increase in riots and other violent demonstrations.

It sure feels like the world is on the brink. To pull back it needs help from those on more solid ground.