Katrina Raynor teaches and researches housing affordability at one of Australia’s most prestigious universities, but has given up, for now, on the dream of a home of her own in Melbourne.

The prospects for the academic, and for the tens of thousands of other young Australians dreaming of getting a foot on the property ladder, grew bleaker this week with news the nation’s house prices were rising faster than at any time in the past 30 years and Melbourne’s median house price was nudging $860,000. 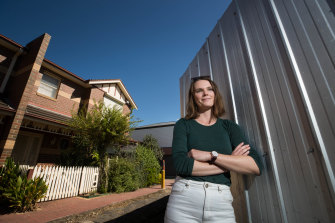 The CoreLogic data came on the heels of ANZ bank economists predicting last week that house values might jump by 17 per cent this year.

More ominous news for would-be owner-occupiers emerged on Thursday as the Australian Bureau of Statistics revealed the firmest evidence yet that property investors are coming back in force after retreating from the market last year.

The latest housing finance data showed Australians borrowed $6.93 billion to invest in residential real estate in February, up more than 50 per cent from the $4.42 billion recorded in June last year.

In Victoria, investors took out $1.94 billion worth of housing loans in February, a 13 per cent increase on the previous month. Although investors’ share of the loans market is still dwarfed by the sums borrowed by owner-occupiers – $28 billion across Australia including $6.46 billion in Victoria – the trend is clear.

Dr Raynor, 29, said she and other first home buyers could rarely compete against investors, who often used equity in their other property holdings to borrow more and outspend younger buyers vying for the same residence, pushing prices even higher in the process.

Most analysts agree that a combination of record low interest rates, various state and federal stimulus measures in response to the COVID-19 crisis and long-standing tax incentives for investors and owner-occupiers have sparked this new fire under real estate.

But in recent weeks, the debate around Australia’s new property boom has turned from wonder at the market’s gravity-defying feats amid a global pandemic to discussion of how sustainable the rapid price rises are and where this is all going to end.

“Sydney has had a Saturday [auction] clearance rate of 80 per cent for eight weeks in a row,” she said.

“The last time we saw a lengthy period where clearance rates were above 80 per cent was back in 2015.

“Clearance rates correlate with price movements, so I anticipate we’re going to see some strong price gains over the March quarter … a strong lift in prices across our capital cities.”

Dr Powell said the real estate market was still led by owner-occupiers, but evidence was mounting that investors would soon be making their presence felt again.

The economist pointed to price expectations surveyed by the Westpac-Melbourne Institute index of consumer sentiment hitting a seven-year high.

“This part of the index is a better leading indicator of confidence coming from investors,” Dr Powell said.

“It is rising and what I’m expecting is that investors will continue to trickle back into the market.

“At the moment, it’s been an owner-occupier-led housing boom or housing recovery, or whatever you want to call it, but I do think that investors will increase.”

But no matter who is buying, Dr Powell does not believe annual price rises of 17 per cent could be sustained over the medium term.

“It gets to the point where affordability issues then bite and, you know, it becomes harder for first home buyers to get into the market and even for owner-occupiers to upsize,” she said.

Policymakers are in no hurry to take the steam out of the property market. Reserve Bank Governor Philip Lowe said last month that his main concern was that purchasers and lenders were behaving responsibly.

Federal Treasury officials told a parliamentary committee in late March that not only were they not concerned about property prices, but that the growth in the market was “working to help drive the broader recovery across the economy”.

However, Dr Raynor, who is convenor of Melbourne University’s multidisciplinary Affordable Housing Hallmark project, believes that Australia is storing up trouble for itself in allowing real estate prices to run rampant.

She argues that there are “two conversations” taking place about the property market, one about the bullet-proof nature of Australian real estate and another about rising levels of housing stress.

“We’re kind of talking about them like they’re separate things, but they’re obviously not,” she said.

“While it might be great for the federal government right now that we have these rising house prices, there’s definitely going to be a hangover from that, at some point, and we just don’t appear to be doing anything to prepare or to respond to that.”

Dr Raynor points to research from the Australian Housing and Urban Research Institute which found mortgage debt to income ratios among over-55s tripling from 71 per cent to 211 per cent between the late 1980s and 2015 and mortgage debt rising by 600 per cent.

“That’s because, over time, people are buying homes later [in life], they’re buying them at far higher price to income ratios, which means that when they retire, they’ve still got a huge mortgage or they’re still renting,” the academic said.

“There’s a problem right now between the haves and the have-nots, the younger generation not getting into housing and the older generation seeing their assets go up.

“How are they going to service that loan into the future when interest rates go up or if they’re still paying it off when they finish working?”

The spiralling values were also having a big effect on price-to-income ratios here and now, Dr Raynor told The Age, with the median house value across Victoria now more than 10 times the state’s median income of $74,000.

“Most of the discussion at the moment is that we’re not seeing higher levels of unaffordability because the interest rates, the cost of money has gone down so much,” she said.

This is all personal, as well as professional, for the researcher who has been dreaming for years of buying a modest house with her partner in Melbourne’s middle-ring suburbs.

But Dr Raynor does not see it happening in the foreseeable future, despite the couple both holding good steady jobs.

“That was the dream, but it’s increasingly annoying me that I’m just not going to,” she said.