Facebook has banned the sharing or viewing of our news articles on its platform. For independent journalism straight from the source, download our app and sign up to our newsletters.

In these unprecedented times, Reserve Bank governor Dr Philip Lowe is having trouble explaining his actions and motivations because there are various things someone with his degree of influence feels he can’t admit. But I’m under no such constraint. So let me have a go at giving you the message he won’t.

Despite Lowe’s reticence, he’s a fundamentally honest person and if you study what he’s saying – and avoiding saying – you can join the dots. 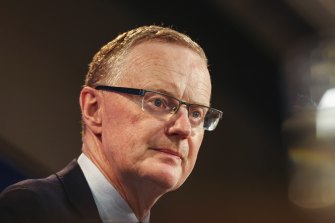 Long before the coronavirus appeared on the horizon early last year, the rich economies had been caught in a low-growth trap caused by a global imbalance between how much people wanted to borrow and invest, and how much other people wanted to save and lend. Around the world, interest rates were heading close to zero.

With our economy growing at a rate well below its “potential” to produce more goods and services, Lowe slowly and reluctantly cut our official interest rate. He was reluctant because he knew that, with rates already so low and households already so much in debt, cutting rates further would do little to help.

But also because, with the official rate already down to 0.75 per cent, he was perilously close to running out of ammunition, while the Morrison government was totally focused on getting the budget back to surplus and so reluctant to use the budget to stimulate growth.

He didn’t want to follow the other, bigger central banks into the unconventional, uncharted and unhinged territory of “quantitative easing” (QE) – central banks buying second-hand government bonds and paying for them merely by creating money, so as to lower longer-term public and private sector interest rates – much less engineer “negative” interest rates (where the lender pays the borrower to borrow).

By the Reserve’s board meeting early last March, it was clear the virus would slow the economy a bit, so Lowe cut the official rate to 0.5 per cent. Within a fortnight it had become clear the pandemic was a much bigger deal.

So, after an emergency meeting, Lowe announced another cut, taking the official rate down to 0.25 per cent, the level he’d long told us was its “effective lower bound”. He also embarked on various forms of QE, including guaranteeing to buy sufficient second-hand Commonwealth bonds to keep the “yield” (interest rate) on three-year bonds at about 0.25 per cent.

The next big move came last November, when Lowe lowered the official rate’s effective lower bound to 0.1 per cent, lowered the target for the yield on three-year bonds similarly, and decided to buy $100 billion-worth of second-hand bonds with maturities of five to 10 years, so as to force their yields down, too.

Then, earlier this month, Lowe announced a decision to spend a further $100 billion buying longer-dated bonds once the first $100 billion had gone. But, he insisted, the board had “no appetite” to push interest rates “into negative territory”.

So what do all these moves prove?

It’s understandable that Lowe should want to maintain public confidence that the independent authority which has had most influence over the day-to-day management of the economy for the past three decades, the Reserve, is at the helm, actively wielding an instrument that’s still highly effective in keeping us on course.

To this end, he has denied that monetary policy (the manipulation of interest rates) has run out of fire power. As he’s stepped further and further into unconventional measures, he’s suppressed his former reservations about their effectiveness and possible adverse side-effects, and striven to give the impression that everything’s under control and going fine. Monetary policy is playing an important part in getting the jobless back to work.

The reality is different. Movements in interest rates – whether achieved by conventional or unconventional means – affect different aspects of the economy via different mechanisms, or “channels”.

The most front-of-mind channel – “intertemporal substitution” – tells us a cut in the cost of credit encourages households to borrow more and spend it on consumption, while encouraging businesses to borrow more for investment in expansion. But if you read his words carefully, Lowe never claims his measures are causing this to happen – because it’s unlikely much of it is.

Rather, he alludes to the “cash flow” channel, saying lower rates are lowering the interest bills of households and businesses with existing debts, thereby leaving them with more money to spend on other things. True – but not terribly powerful, particularly since most people with home loans leave their monthly payments unchanged and thus pay off their mortgage a bit faster, a form of saving.

In his evidence to a parliamentary committee earlier this month, Lowe vigorously denied that the Reserve was “targeting the dollar” or that he saw signs of “currency manipulation” by other central banks (also known as “competitive devaluations”). Strictly true – but misleading.

Lowe isn’t “targeting the dollar” at a particular level or as a goal in its own right. But he cares deeply about the level of our currency’s rate of exchange against the currencies of our trading partners because this greatly affects the international price competitiveness of our export and import-competing industries, and thus how much they produce and how many people they employ.

When discussing the benefits his recent interest-rate moves have brought us, Lowe never fails to mention that they’ve caused our exchange rate to be “lower than otherwise”. That’s true – but it’s not a lot to show for all the Reserve’s lever-pulling. Lowe isn’t actually denying that monetary policy is much less effective in boosting demand than it used to be.

There’s little evidence that QE does much to increase demand for goods and services – as opposed to demand for assets such as shares and houses (probably with adverse consequences for the distribution of income and wealth). But it does seem clear that QE gives you a lower exchange rate.

Trouble is, when the Americans use QE to make their exchange rate more competitive, this makes other countries’ exchange rates less competitive. So the Europeans and Japanese defend themselves and start doing it too.

Get it? Now all the big boys are doing it – and keep doing more – Lowe’s had little choice but to do it too. Had he resisted getting into the unknown waters of unconventional measures, our dollar would be a lot higher and hugely uncompetitive.

Which means almost everything he’s done over the past year hasn’t been making things better for the economy so much as stopping things getting worse. And it also suggests that, however much Lowe lacks an “appetite” for moving to negative interest rates, if the big boys choose to go further down that path, he’ll have little choice but to join them.

There are other issues on which Lowe has felt the need to be less than frank, but they’re for another day.

Start the day with major stories, exclusive coverage and expert opinion from our leading business journalists delivered to your inbox. Sign up here.