Behind that great GDP number, the real economy is slumping 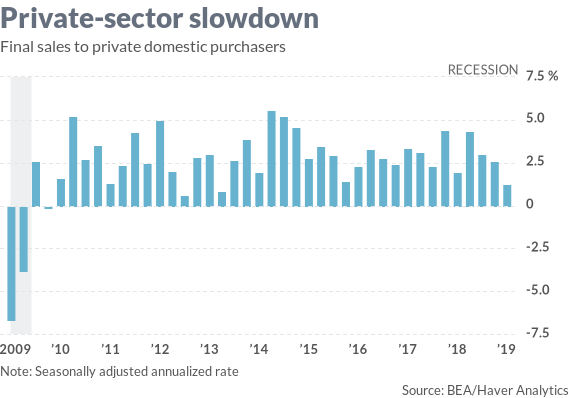 The economy isn’t doing nearly as well as that 3.2% annual growth rate for gross domestic product reported Friday by the Commerce Department.

The heart of the real economy — private-sector consumption and investment — slowed sharply in the first quarter to a 1.3% annual rate, the slowest in nearly six years.

“First-quarter GDP is 3.2%, but the underlying data is much weaker and is consistent with a slowing economy,” said Jason Furman, former economic adviser for President Obama and a professor at Harvard University.

“Fed policy makers are going to look right past that 3.2% top-line number and focus on composition of growth, which will reaffirm its prudent pause,” said Joseph Brusuelas, chief economist at RSM.

Consumer spending rose only 1.2% in the first quarter, after healthy 2.5% growth the previous quarter. Spending on durable goods plunged 5.3%, the worst since 2009.

Business investment also slowed, to 2.7% from 5.4%. Investments in structures, such as factories, offices, stores and oil wells, fell for the third straight quarter. Investments in equipment — computers, airplanes and machinery — barely grew, rising 0.2%.

It may be coincidence, it may be statistical noise, but the economic momentum has slowed since the big tax cut was passed.

The tax cut was supposed to supercharge the private-sector, and it did — for a few quarters.

No one should panic over one quarterly number, but neither should one celebrate growth that isn’t sustainable. The 3.2% estimate for gross domestic product was boosted by one-off factors — a big improvement in the trade balance, a big build-up in inventories, and a big pop in state and local government spending.

This is real production, real money that was spent, but it can’t last.

“To the degree today’s data has any info, it is that the underlying trend of consumption and investment is weakening,” Furman said. “And no reason to believe we’ll get lucky again next quarter” with inventories, net exports and government spending.

Lates News:
2019-04-26
Previous Post: Stablecoin Popularity Increased as 26 New Tokens are Launched on Stellar
Next Post: Is a degree worth it? Here's how much extra cash college grads are getting in England