Bank Of England Lifts Key Rate To Highest Since 2009 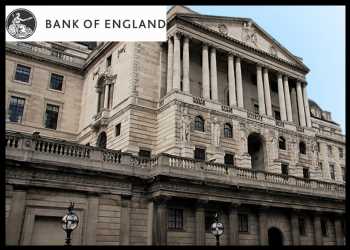 The Bank of England raised its key interest rate by a quarter basis point to the highest level since the global financial crisis in 2009, as inflationary pressures intensified amid the labor market tightness, but the pace of tightening fell short of the U.S. Federal Reserve’s latest move.

The Monetary Policy Committee, led by Governor Andrew Bailey, voted 6-3 to raise the bank rate by 25 basis points to 1.25 percent, which is the highest since early 2009.

This was the fifth hike in a row and the central bank has raised the bank rate by a total 1.15 percentage points since December.

The majority of members observed that the labor market remained tight and indications of broader domestic inflationary pressure required a response in order to ensure inflation returned sustainably to the target in the medium term.

They said faster policy tightening now would help to bring inflation back to the target sustainably in the medium term, and reduce the risks of a more extended and costly tightening cycle later.

“The scale, pace and timing of any further increases in Bank Rate will reflect the Committee’s assessment of the economic outlook and inflationary pressures,” the bank said.

The U.S. Federal Reserve on Wednesday raised the target rate for the federal funds rate by a larger-than-expected 75 basis points to 1.75 percent, which was the biggest rate hike since 1994.

The European Central Bank last week announced its intention to hike the rate by a quarter point in July.

Earlier on Thursday, the Swiss National Bank sprang a surprise by lifting its policy rate for the first time since 2007, thus joining its peers in the battle against runaway inflation.

The central bank raised the policy rate and the interest rate on sight deposits by half a percentage point to -0.25 percent from -0.75 percent.

The SNB signaled that more tightening in future is possible.

While the Fed looks poised to take rates well above 3 percent, it is harder to see the Bank of England following suit, ING Economist James Smith said.

Investors have been pricing a terminal rate above 3.5 percent in recent days, which seems unlikely to be delivered, the economist added. The MPC will look to raise rates to the 2 percent area by the end of this year, Smith said.

The MPC forecast consumer price inflation to be over 9 percent during the next few months and to rise to slightly above 11 percent in October. The increase in October would reflect higher projected household energy prices, the bank said.

The latest projection was above BoE’s May forecast, when the bank estimated inflation to peak over 10 percent at the end of 2022.

Inflation shot up to a 40-year high of 9.0 percent in April from 7.0 percent in the previous month, putting a severe squeeze on household income.

As inflation exceeded the target by more than 1 percentage point, the BoE Governor Bailey wrote an open letter to the Chancellor, citing the reason for high inflation and the action taken to bring it back to the target.

Bailey said the bank will be particularly alert to indications of more persistent inflationary pressures, and will if necessary act forcefully in response.

Bank staff expect GDP to fall by 0.3 percent in the second quarter, below the May Report projection of 0.1 percent growth.