Microsoft co-founder Bill Gates provides insight into the causes of the energy crisis in Texas on ‘Fox News Sunday.’

Eight counties in three southern states accounted for half of the United State's flood insurance claims payments in 2020.

A new analysis from the environment and energy publisher E&E News said that the federal flood insurance program – or the National Flood Insurance Program (NFIP), which is managed by the Federal Emergency Management Agency (FEMA) – paid $1.2 billion in claims overall, breaking its $1 billion threshold for the sixth year in a row.

Of that $1.2 billion, the outlet reported that eight counties in Alabama, Florida and Louisiana accounted for half of the payments.

The payments are delivered to residents in designated NFIP communities by a network of approximately 60 insurance companies and the NFIP Direct, according to FEMA's website.

Hurricane Sally, a Category 2 storm that hit the Gulf Coast in September, reportedly made up around one-third of the total claims paid by the federal program.

Examining NFIP payments recorded since the 1970s, E&E News said they found that the average payment last year was $47,000 – highlighting an increase in claim costs in a program that is supposed to be "self-sustaining."

The outlet says that the increase in average payments is a direct result of a changing climate and its impact on coastal cities.

The National Oceanic and Atmospheric Administration (NOAA) reported last July that parts of the increase in high-tide flooding along both the Atlantic and Gulf Coasts since the millennium have been "extraordinary."

In an article detailing the report, The New York Times noted that NOAA data pinned the flooding increase on rising sea levels.

It's a shift that has already spurred the residents of some states to pack up and move in what has been deemed "climate migration" or a "climate exodus."

In 2019, Bloomberg reported that Florida had started buying out homes and bulldozing them to clear a path for swelling seas. 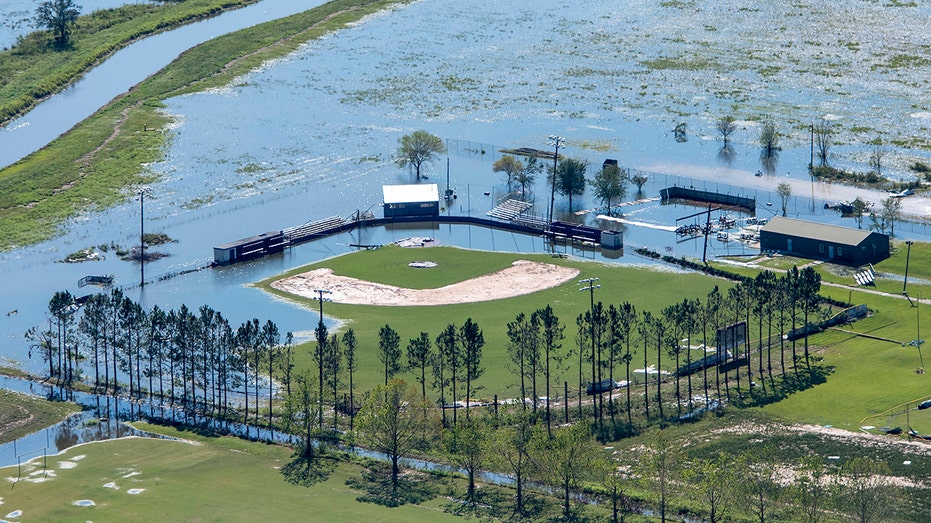 FILE – In this Oct. 10, 2020 file photo, a flooded recreational area is seen in the aftermath of Hurricane Delta in Iowa, La. Hurricane Delta, which made landfall about 11 miles from where the devastating Hurricane Laura hit a little more than a mont

NOAA said that the frequency of high-tide flooding is expected to accelerate and Nicole LeBoeuf, acting assistant administrator for NOAA's National Ocean Service (NOS), told Americans to "pay attention" as "conditions are changing," on a call with the Times following the report's release.

It's an issue states claim will also affect ecosystems, and one ecologist wrote in The Virginia Mercury on Tuesday that high salinity from rising sea levels is creating "ghost forests" and killing trees up and down the Atlantic Coastal Plain.

However, according to E&E News, many FEMA Flood Insurance Rate Maps (FIRM) are outdated or inaccurately depict flood history and more than a third of the claims payments made last year were for properties outside of high-risk flooding zones.

In recent news releases, FEMA has allowed the public to review flood maps in locations like Dekalb, Marshall and Jackson, Ala., and Ellis County, Texas.

The agency is also revising its premiums on its 5 million policy members so that insurance rates better reflect a property's flood risk; they call the effort "Risk Rating 2.0."

FEMA did not provide Fox News with comment at the time of publication.