Pennsylvania Legislators Propose the Creation of a Crypto Task Force 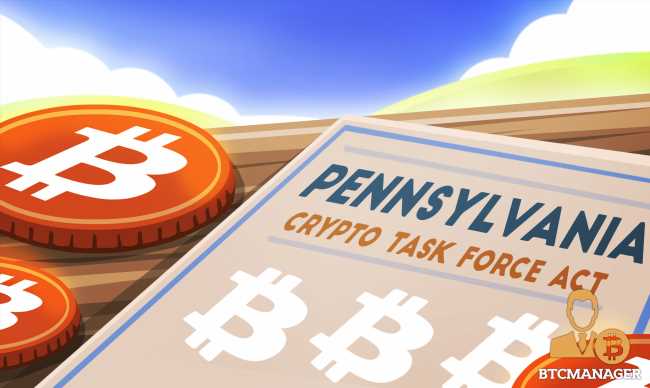 Some members of the Pennsylvania House of Representatives introduced a bill into the state’s General Assembly, which proposes the establishment of a crypto task force that would examine the use of cryptocurrency and digital assets in the Commonwealth of Pennsylvania.

The bill which was published by Legiscan was introduced into the house on Monday (July 19, 2021). The bipartisan bill was initiated by 10 members of the Pennsylvania House of Representatives, which include eight democrats and 2 republicans. If the bill is passed, it would be known as the “Digital Currency Task Force Act.”

Meanwhile, the bill seeks to create a crypto task force, which will have 12 members drawn from the House of Representatives, Senate, Governor appointees, the Secretary of Revenue, and the Secretary of Banking and Securities. These members will serve without compensation.

The proposal also outlined the duties of the proposed task force. Part of the responsibilities of the body would be to examine the requirements for cryptocurrency mining activities, and the impact of crypto usage on State and local tax receipts.

Also, the tax force will review the number of crypto assets traded in the US State, as well as cryptocurrency exchanges in the Commonwealth of Pennsylvania. Furthermore, the body will be responsible for evaluating the transparency of the cryptocurrency marketplace, with a focus on price manipulation and other illegal activities.

Another responsibility of the task force is to examine investment entities that have large holdings in crypto and digital assets. In addition, the cryptocurrency tax force will study crypto regulatory policies in other states, and also at the federal and international levels.

The bill also states that the task force would hold public hearings which would be useful during the review process. Following the end of its review, the final report covering its findings and recommendations will be submitted to the Pennsylvania Governor, the Senate, and the House of Representatives.

Meanwhile, back in January 2019, the State’s Department of Banking and Securities said that bitcoin and other crypto assets were not seen as money, stating that the Money Transmitter Act did not apply to crypto exchanges.

While Pennsylvania is looking to introduce a crypto tax force, the U.S. state of Wyoming is ahead in terms of crypto and blockchain adoption.