Early this week, Dogecoin surged by over 10% following the announcement that Elon Musk had acquired a 9.2% stake in Twitter. While there is no direct connection between the price surge and the business magnate’s purchase of Twitter shares, it would not be far-fetched to believe it was motivated by it, considering the relationship between the billionaire and the meme coin.

On Monday, a regulatory filing revealed that Elon Musk had purchased about $3 billion in Twitter shares, making the billionaire the largest shareholder. The news release saw the leading meme coin DOGE jump by about 12%, from $0.13 to $0.156. 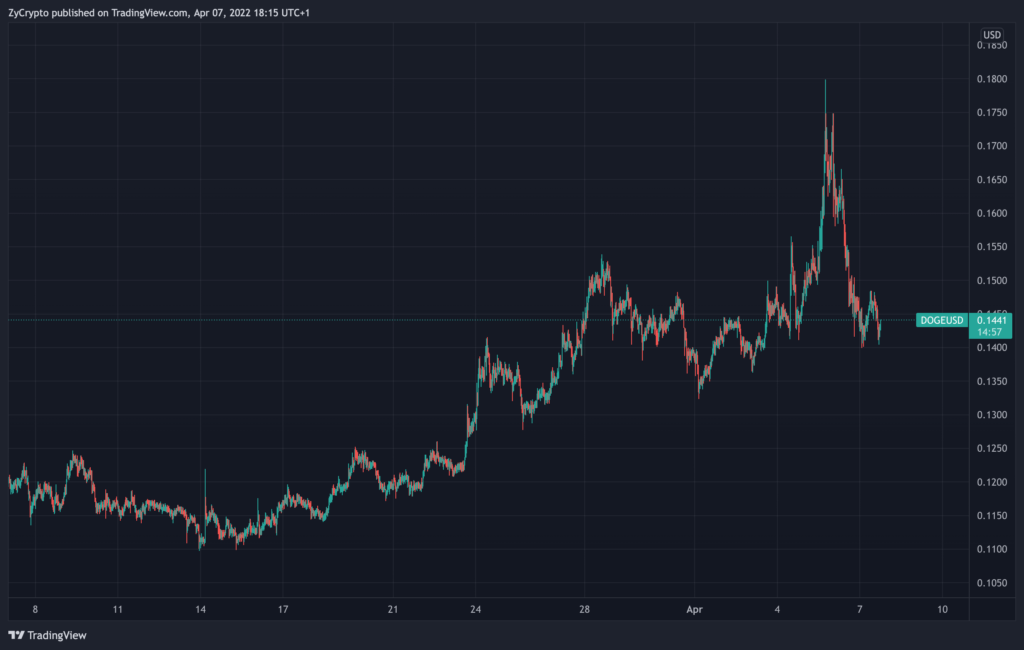 While there appears to be no direct correlation between the shares purchase and the cryptocurrency, it is unsurprising that the announcement has bolstered the value of the meme coin even as proponents increasingly envision a $1 DOGE price before year-end.

A week ago, the billionaire had launched a campaign over free speech on the social media platform, hinting that he was considering creating a new platform or buying Twitter itself. In response to a comment on one of these tweets, the billionaire suggested that he would be willing to create support for DOGE on Twitter for millions of users as a tipping currency.

The Tesla chief has been a long-time supporter of the meme coin, calling it “the people’s crypto.” It is no secret that several pundits attribute the massive price leaps of the asset in the past year to Musk’s vocal support and influence. Elon Musk has explained that the meme coin has all the necessary characteristics to serve as a means of exchange, a quality he believes is lacking in Bitcoin and Ethereum.

However, Musk’s support for the asset has not only been vocal. In January, Tesla revealed that they would be accepting the meme coin as payment for online merchandise. Additionally, Elon Musk has also revealed that he is working with developers on the project to make it even more efficient for users to conduct transactions on the network.

All of this considered, it is no surprise that Musk’s increased stake in the popular microblogging platform Twitter would increase the demand for the digital asset. Already, the billionaire has started making his mark by asking if users of the platform want an edit button feature.

The New Trajectory For DOGE

Dogecoin was developed as a joke by Jackson Palmer and Billy Markus to ridicule the following around crypto at the time. However, the meme coin has become a crypto favorite in a twist of fate.

While Palmer and Markus have left the project, Markus remains an influential figure in the DOGE community. Markus, as reported, is now pushing for the asset to be seen as a payment solution. As ZyCrypto reported, the programmer said there was no downside for businesses accepting the coin.

Lates News:
2022-04-07
Previous Post: Dubai Is Finding Itself at the Center of Crypto Regulation
Next Post: Affordable insulin for all who need it is a non-partisan issue we should all agree on