Bitcoin’s sink to ~$43,400 on Sunday, February 28th, was its lowest point in roughly three weeks. Although the price had corrected to levels above $47,480 at press time, some analysts believe that Bitcoin could be in for further drops in the next few days.

Indeed, CoinDesk reported that yesterday’s drop to $43K may be the continuation of a downward trend that emerged last week as a result of concern over rising US Treasury bond yields. 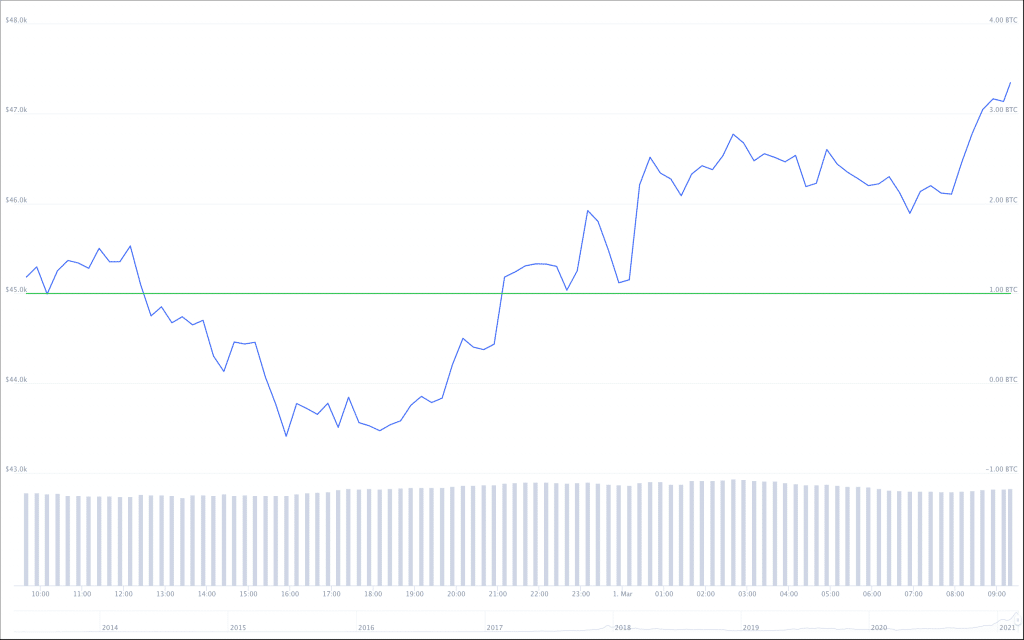 Some analysts believe that the increase in yields could cause the Federal Reserve to tighten its monetary policy in an attempt to stem the rising tide of inflation. However, such tightening could cause a sell-off in risk-on assets, which include Bitcoin and other cryptocurrencies.

“This Is Still a Dip Buyer’s Market.”

In any case, the drip to $43K was seen by many as an opportunity to scoop up some BTC on the cheap.

Matt Blom, Head of Sales and Trading for the digital-asset exchange firm, EQUOS, was quoted by CoinDesk yesterday, saying that “this is still a dip-buyer’s market.”

“On the upside, a close above $45,000 will change the theme. $48,200 will be the first target to be chased down, and back above $50,000, everyone will forget last week ever happened and will be shouting for a return to the all-time highs,” Blom explained.

Jameson Lopp also pointed out on Twitter that the drop to $43K may not be so significant in the grand scheme of things, though last week was Bitcoin’s worst performance since March of 2020.

“Bitcoin has crashed to 10 times the value of what it crashed to a year ago,” he wrote.

BITCOIN HAS CRASHED TO 10 TIMES THE VALUE OF WHAT IT CRASHED TO A YEAR AGO.

Beyond Bitcoin, other cryptocurrencies also saw red over the weekend, though Monday seems to have brought a wave of short-term recovery to altcoins. Still, the recovery has not yet been strong enough to change the weekly trends for most coins.

Of the top 50 cryptocurrencies listed by market cap, only a handful were showing positive trends over the last seven days: Cardano (ADA) up 20.81 percent, NEM (XEM) up 3.5 percent, Solana (SOL) up 36 percent, Voyager Token (VGX) up 6 percent, Fantom (FTM) up 45 percent, and UNUS SED LEO (LEO) up 32 percent.