Bitcoin’s (BTC) layer 1 transaction volume in 2018 was $3.2 trillion. Furthermore, over $2.2 trillionof Bitcoin was traded throughout last year – almost four times more than the amount traded in 2017, despite the falling prices.

Accordingly, Bitcoin’s total traded volume for 2018 is $2.2 trillion, which is more than the traded volume of the Bulgarian Lev (BGN) and right behind the Chilean Peso. It’s also almost four times the volume traded in 2017, which was $858 billion.

What’s more, the transferred value is denominated in USD terms. Therefore, the declining price of 2018 should also be taken into account. 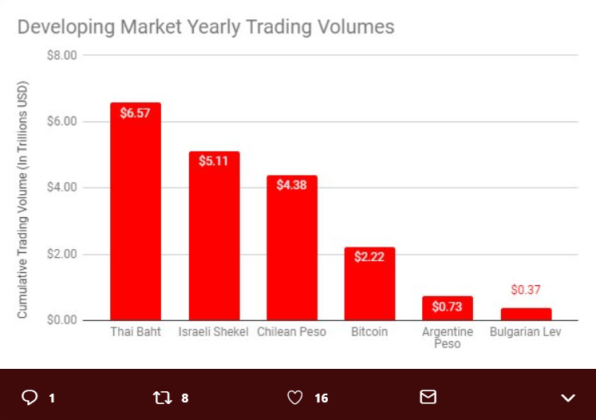 Meanwhile, the total on-chain transaction volume was $3.2 trillion in 2018, which doesn’t even include the second layer Lightning Network that quickly grew to more than 5,200 nodes and over 19,000 channels by the end of last year.

Back in 2017, only about 10 percent of Bitcoin payments were made using the Segregated Witness (SegWit) protocol. This number has increased substantially in 2018, as SegWit transactions comprise 40 percent of all the transactions carried out on Bitcoin’s network.

Satoshi Capital Research makes a point that the above fact “solidifies” the position of Bitcoin as a global currency, with BTC now seeing greater volumes than the Argentinian peso and the Bulgarian Lev.

Earlier in January, in his first New Year show, Max Keiser said that the new world reserve currency will invariably be Bitcoin.

What do you think of Bitcoin’s performance in 2018? Don’t hesitate to let us know in the comments below!