Bancor V3 Set To Launch May 11

Bancor 3, the long-awaited next version of the Bancor Protocol, is expected to launch this month on May 11, bringing new updates and upgrades to the decentralized finance (DeFi) ecosystem on the network. Since the live launch of the beta version a fortnight ago, April 19, the upgraded version has gained global traction, setting a good rapport for the upcoming launch of the full mainnet version this month.

Over the past two weeks, as caps are raised on Beta pools deposit limits, liquidity capacity on the protocol is being filled up almost immediately with its caps reached $8 million TVL currently. Notwithstanding, the platform has also welcomed over 30+ token projects that commit to providing liquidity and running liquidity mining rewards programs on Bancor 3 including Polygon, Paraswap, Airswap, and Synthetix among others.

Last November, following the success of Bancor V2.1, core contributors announced plans to launch an upgraded version, to enable users to earn the most rewards while reducing the gas fees to a minimum.

Given the successful tests already conducted on Bancor 3 Beta, the BancorDAO is electing to end the process early, whereby if successful, the test will end on May 11th, bringing to life the live network version.

At launch, the Bancor 3 network only had a little over $500,000 in TVL across three cryptocurrencies namely $WETH, $DAI, and $LINK. Fast-forward two weeks later, the platform boasts a $8 million TVL across four assets ($BNT was added), representing over a 10x increase during the period, data from Dune Analytics shows. Of the total TVL, nearly $2 million $BNT tokens have been pooled in the network following the cap adjustments. 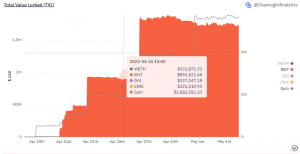 The launch of the beta version of Bancor 3 and the explosive growth in TVL shows the high demand in the market for the yields on Bancor 3, once the mainnet launches. But what exactly do the new upgrades on Bancor 3 have to offer?

First, Bancor 3 introduces the ‘Omnipool’, a single pool to stake your BNT and earn yield from the entire network. The single asset pool simplifies the process of earning yield via BNT, as you don’t need to move your BNT across different pools to earn the most rewards and fees.

‘Infinity Pools’, which allow anyone to contribute as much as they like without waiting for space to open up on the liquidity-capped space. This means there are no longer deposit limits on Bancor – which can allow total value locked to balloon infinitely.

Thirdly, the Bancor 3 upgrade introduces auto-compounding of rewards. The platform automatically adds the investors’ rewards to the pool, offering a greater opportunity to increase their potential earnings while increasing the pool’s liquidity.

Finally, the new protocol also introduces a dual-reward token system, whereby third-party token projects can add support for their tokens in pools, and reward the investors in their native tokens on top of the $BNT rewards. All rewards earned on the system are free from the risk of impermanent loss, reducing sell pressure and the cost of running rewards programs for third-party protocols.

This has enticed over 30+ DeFi projects to join the Bancor 3 network pledging to run community liquidity mining programs and reward users.

A flock of projects on Bancor 3

Recently, Parasawap, a DeFi protocol, conducted a vote through its decentralized autonomous organization (DAO) to vote on a proposal to activate PSP/BNT dual liquidity mining rewards on Bancor 3. The governance vote was successfully completed on April 15, with 58% of the community voting to add $PSP liquidity to Bancor 3. This proposal seeks to commit 1 million  $PSP for the dual liquidity mining campaign and benefit from 1 million worth of $PSP provided by BancorDAO.

Additionally, AirSwap also added 20K $AST to the Bancor 3 liquidity mining program, with over 99% of the community votes agreeing to this. BancorDAO will match the dollar value of the $AST in rewards.

Finally, Shiba Girlfriend ($SHIBAGF) also successfully voted for the addition of its token to the Bancor 3 dual liquidity mining reward system, with 72.49% of the community voters selecting the move to Bancor 3 upgraded network.

Other blue-chip DeFi projects such as Polygon (MATIC), Synthetix (SNX), Flexa (AMP), Brave (BAT) have been reported to be joining the Bancor 3 launch to seed liquidity and offer liquidity mining incentives on the protocol.

Lates News:
2022-05-06
Previous Post: Here's why stocks could rebound after a volatile month
Next Post: Brit danger tourist in Afghanistan ‘getting way too comfy’ with new Taliban pals