$6 Trillion Was Sent across Bitcoin Network

To estimate the true value of Bitcoin is not a simple task. For doing that it is necessary to examine a lot of factors and aspects. One of the most comprehensive ways to estimate its value is to consider the value transferred over this network. Up-to-date evaluations reflect that Bitcoin is showing good results as a currency.

Bitcoin concept is known for nine years already. But the first several years of its existence were not very successful for it, as it attracted practically no attention. But as it is said, time works great changes. Bitcoin is attracting more and more people and all of them will name very different reasons if asked why this cryptocurrency is interesting for them. Of course, for many of them Bitcoin is an investment tool, but at the same time we should say that today the cryptocurrency can offer you much more other opportunities.

As it was investigated, more than $6 trillion has been transferred across the Bitcoin network over the past several years. And it is quite an impressive amount taking into consideration the specificity of this sphere. These numbers show that Bitcoin is rather actively used nowadays. However, we should understand that this amount also includes rewards for miners and funds transferred to exchanges. 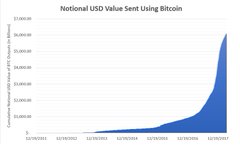 Nevertheless, the daily transaction volume is also growing.  Today it is around $10 billion. And this amount is clearly above all the expectations that Bitcoin enthusiasts had nine years ago.

The number of Bitcoin users is increasing. The last year was a period of enormous growth of global attention to the cryptocurrency market. But when new people come to explore Bitcoin, some time is needed to see the value transferred over this network growing.

What is also important to be mentioned is that Bitcoin represents itself the only one world’s cross-border currency. Neither trade agreements nor inter-fiat exchange rates impose any limitations or restrictions for it. Moreover, it is the only currency that is not regulated by governments right now despite some their trials.  Nevertheless, there is still a lot to do to make it a global currency.

Thanks to technical developments, Bitcoin is said to continue its way to success. In spite of the fact that the first quarter of the year was the worst period for Bitcoin ever, Brian Kelly believes that according to the traditional seasonal cycle, the second quarter will be good for this cryptocurrency.

Among the factors that have negatively affected Bitcoin price in the beginning of this year, experts name government regulation, measures taken by the major social media firms, and a lot of negative information about Bitcoin and its price published by press.

Nevertheless, historically, Bitcoin usually performs well in the second quarter. So, time will show how things will turn out.