Washington (CNN Business)Meat producer JBS closed nine of its US beef processing plants on Tuesday following a cyberattack that took down its IT systems, but the company plans to restore operations on Wednesday and has told employees to return to work.

Facebook pages that purport to represent several JBS beef facilities across various parts of the country indicated on Tuesday evening that normal business would soon resume. A plant in Green Bay, Wisconsin, said it would open Wednesday on a four-hour delay. A plant in Cactus, Texas said many of its operations would resume with its B-shift schedule. And a plant in Grand Island, Neb. said all of its departments would reopen on a normal schedule. 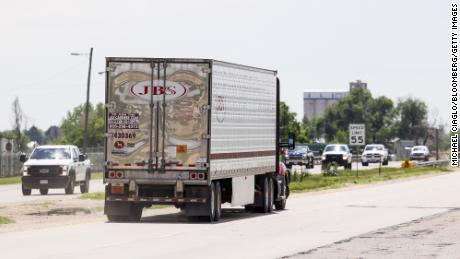 The hack, which the White House described Tuesday as ransomware, affected all of JBS’s US meatpacking facilities, according to an official at the United Food and Commercial Workers union that represents JBS employees. The cyberattack resulted in the closure of all US beef plants, which are located in states including Arizona, Texas, Nebraska, Colorado, Wisconsin, Utah, Michigan and Pennsylvania, the union official said.

In a statement late Tuesday, JBS said “the vast majority” of its beef, pork, poultry and prepared foods operations will be running on Wednesday.

“Our systems are coming back online and we are not sparing any resources to fight this threat,” said Andre Nogueira, the CEO of JBS USA.

JBS did not immediately respond to questions from CNN about the hackers’ demands or whether the company paid the ransom.
Source: Read Full Article