When the NCAA men's tournament pairings came out three weeks ago, Gonzaga and Baylor were considered the two favorites to win the title. But it is rare that the championship game matches the two best teams after a single-elimination event that requires five or sometimes six victories to reach the conclusion.

So having the Bulldogs and Bears survive the 68-team field and meet Monday (9 p.m. ET, CBS) is something college basketball fans can celebrate. It has the makings of a classic that will produce a high level of play and a dramatic finish. But who wins?

Our experts offer their picks on who will cut down the nets after the buzzer sounds.

There is the chance Gonzaga won’t be able to muster the energy and emotion needed against Baylor after having to expend so much of it to beat UCLA on Saturday night, needing a half-court shot from Jalen Suggs at the end of overtime to win it. But I think it will have the opposite impact. Gonzaga has rarely been tested during its unbeaten run, and I think the close call against UCLA will only make the Zags hungrier to finish the job. Gonzaga 85, Baylor 78.

Realistically, we have two national title teams and Gonzaga is one of the best offensive teams of the last decade. But on any given night, a better team can lose — as we nearly saw with an inspired UCLA squad. Expect that to happen Monday night, as the Bears have what it takes to pull off the upset – if we're calling it that. The difference in this game will be depth. Baylor's drubbing of Houston displayed how deep coach Scott Drew's team can go. In the overtime thriller vs. UCLA, coach Mark Few only used two players off his bench for a total of 19 minutes. Meanwhile, Baylor is peaking at exactly the right time and has five exceptional guards. If Jared Butler and Davion Mitchell are on their A-game, the Bears will deny Gonzaga a perfect season. Baylor 73, Gonzaga 71. 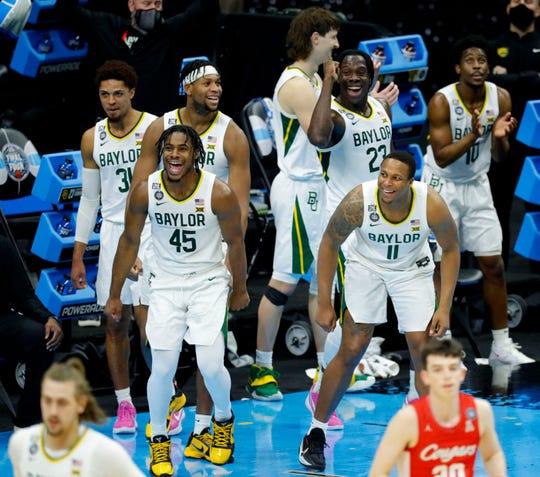