Editors note: Todd Lieberman, who with David Hoberman co-owns Mandeville Films and Television, has been a prolific producer of films from Beauty and the Beast to The Aeronauts, Wonder, Stronger, The Fighter, The Muppets and The Proposal. Like most in Hollywood, he spends time in the pandemic prepping projects for the cautious rebound in production starts, and discussing presidential politics — sometimes in equal measure. Here he describes how this prompted him to reach back to his Cleveland hometown in search of real discussion about the high stakes of the upcoming election. Since most in the Hollywood community came here from elsewhere, it sounds like a pretty effective way to engage in some real dialogue that isn’t about preaching to the converted on social media.

Several months ago a friend was complaining to me about the state of politics and wondering how we got here — he couldn’t believe that the system allowed for us to get to a place where the division in the country seems insurmountable, and the President himself is the one fanning the flames of that division. He confided that depression was creeping in because of it all, and felt the only answer for him (and the country) was a change in leadership at the top. I asked him what he planned to do about it. “I’m not really a protester,” was his response. That was a lightbulb moment for me, not because I was judging him, but because I was him.

When thinking about a desired change we have a few options. We can let whatever anger and dissatisfaction with the current state of affairs slowly eat away at us. We can ignore it completely and live inside our own safe bubble where the realities of the world don’t exist. Or, we can do something. Historically I have been the “living in a bubble” guy — believing that the system works and desperately clinging to a positive attitude. Sure, I donate to the campaigns I like and participate in organizations I feel have value politically, but I have generally been uncomfortable discussing my views out loud. I welcome a good debate, but absolutely thrive more in peace than discord. If my eyes have been wedged open to anything this year, it’s that the system, although it doesn’t always work, does allow for us to try and make it work better. And within that system we all have the right and, in many cases, the obligation to use our voices.

But if you do that in Hollywood, you will mostly be greeted with a head-nod in the affirmative. While using my voice for political reasons is not innately comfortable for me, that discussion was pushing me toward the uncomfortable. And if I was going to take that step, I was going to do it with people who may feel differently than I do. I wanted real discussion. I toyed with a ton of ideas, spoke to some confidants, and ultimately decided to reach out to my hometown of Cleveland, Ohio, and make a plea directly to my city, asking them to consider my point of view on the election, and most importantly to vote. With that, I took out full-page ads in the local papers [click to enlarge]. 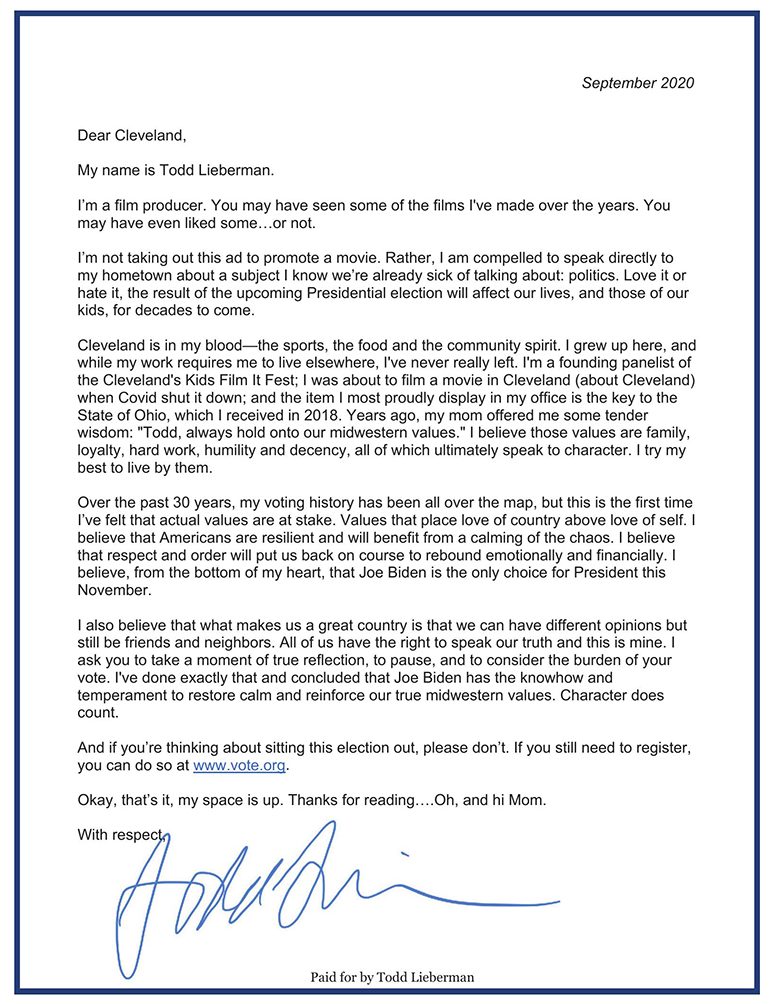 Much of what followed was not surprising: messages of support for voicing what many are feeling (family, friends and strangers); messages of pure hate (all strangers…and maybe some bots because I actually didn’t think humans could be that mean!); and a handful of people sending polite responses without saying much (mostly family who likely disagree with my argument). One family friend actually decided to write a letter to the editor to debate my points in print — that one made me smile.

In all the cacophony of responses it might have been easy to lose the substance. But the most surprising part of all were the messages from people who really wanted to connect. People who truly wanted to know why I feel what I do, and to understand why I am so staunch in my beliefs. I was stunned by how many individuals are so fed up with the system and dislike both candidates that they planned on sitting out the election in protest. They want to do the right thing, but are so overwhelmed with information that they’ve been rendered inert.

Engaging with these people was the most rewarding part of it all. These weren’t anonymous trolling tweets, or posts with no accountability or repercussions; these were real people who wanted to connect, understand and share points of view. And while many of them don’t share my views politically, we were able to find common ground in some other areas (like Cleveland sports!) as we discussed uncomfortable topics in a respectful way. Yes, talking to all these people was awkward, frustrating, time consuming and exhausting; but it was also enlightening and exhilarating.

So when [Deadline co-editor in chief] Mike [Fleming Jr] asked me to write a guest column, my first impulse was that I had already stepped way outside my comfort zone for my hometown, and I wasn’t prepared to do that here. But the passing of RBG reminded me of the urgency of this moment. And I know many of you could use your voice as I did, and reach out to your own hometowns to have those uncomfortable conversations as well. Of the countless people I spoke to, texted with and emailed, half of those who were undecided or planning on sitting out the election ended the conversation by saying they were going to do more research and get back to me. One quarter of the people I spoke with ultimately told me they now intend to vote. The margin between victory and defeat in many states will be unfathomably small. Every single vote matters. And this experience illustrated that while many of us sit with the strength of our convictions, there are still many out there who crave guidance and counterpoints to the dizzying information they are being fed. I recently watched The Social Dilemma on Netflix (a must-watch IMO), and it put into words and images what we all intuitively know — that the amount of disinformation in the world is beyond comprehension, and the ways it metastasizes are petrifying. The disinformation cycles only seem to be thriving more within the isolationist environment we’ve all been living in for the past six months.

So what can we do about it all, and why did I write this column? Lightbulb moment #2. My experience shone the brightest of lights on a heartening truth: there are undecided voters out there. There are people craving the clarity some of us already have in our minds. But it is only human connection that can cut through the haze. And that puts the onus — and, in these concerning stages of our democracy, the obligation — on us to seek them out. As I said in my hometown papers, I believe that what makes our country great is that we can have those discussions while remaining friends and neighbors. I found this to be true, and my hunch is that you will too. Character counts, and civility still exists. You have the power to initiate this dialogue. And having that dialogue with people you grew up with outside of Hollywood is worth the effort. So, with only a few weeks left to determine our future, I urge each of you to use this power, and find comfort in being uncomfortable.

Lates News:
2020-09-29
Previous Post: First presidential debate: What to watch for at the Trump vs. Biden showdown
Next Post: President Trump’s debate game plan is to ‘unravel’ Biden’s ‘attachment to far-left’: Mercedes Schlapp