Cecily Strong Finds Her Path In ‘Search For Signs Of Intelligent Life In The Universe’: Off Broadway Review

After 10 seasons at the pressure cooker of Saturday Night Live, Cecily Strong comes well prepared, much loved and properly steeled to her New York stage debut as the solo star in an Off Broadway revival of Jane Wagner’s The Search for Signs of Intelligent Life in the Universe. Good thing, too, since jumping into a role so identified with the iconic Lily Tomlin must surely demand a degree of self-confidence to equal the comedy and acting chops required.

Tomlin was already a star when she performed the original Broadway production of The Search… in 1985, but her acclaimed, Tony-winning turn became an enduring showcase for the actress, a performance captured for a wider audience in a 1991 film adaptation. She even returned to Broadway in a 2000 revival.

Filling a role so thoroughly inhabited by its original performer – think Cassie Beck starring in the national touring production of What The Constitution Means To Me – is no doubt challenging, and Strong, while powerless to supplant all memories of Tomlin, has us rooting for her from the get-go. A less elastic and visually eccentric actor than Tomlin, Strong instead grounds her interpretation of the play’s oddball and appealing assortment of characters with a straightforward, amiable and nicely detailed comic style.

All the more disappointing then that The Search…, executive produced by Tomlin and Wagner and opening tonight at the spiffy Hudson Yards venue The Shed, often feels so flat, a casualty of material that once seemed utterly fresh and of-the-moment but now, despite a few feeble attempts at updating, comes off as something of a relic. Characters that occupied prime turf in the ’80s zeitgeist – Second Wave feminists newly daunted by the have-it-all quest, a CBGB-era Patti Smith-esque punk poet, pre-hook-up-app Times Square sex workers and even an aerobics fanatic – a timestamped signifier if ever there was one – have long since lost their edges. 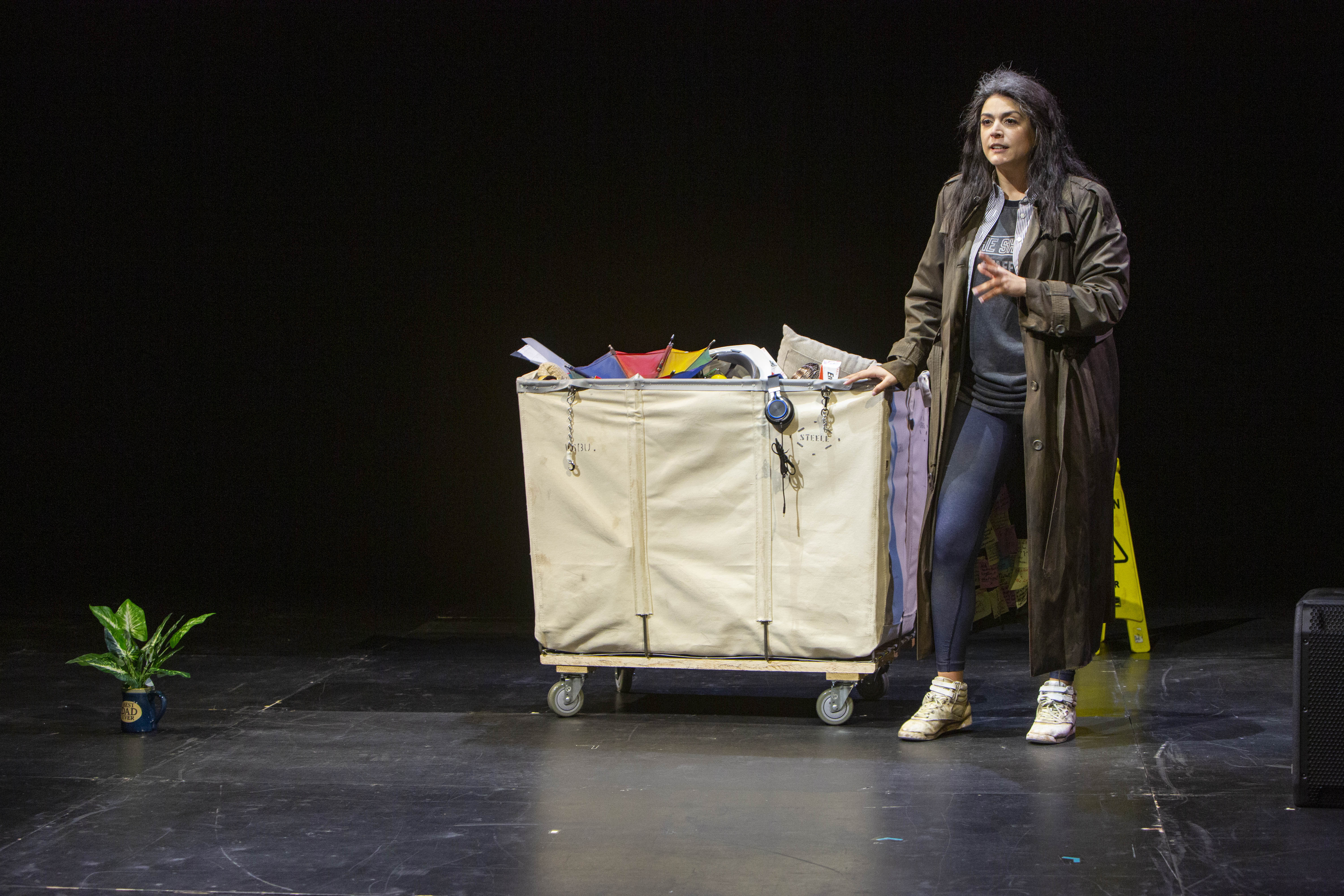 So too has our tour guide Trudy, a homeless New York City woman – she’d once have been called a “bag lady” – and proudly “crazy” soul whose body-jumping zaps into other characters form the structure of the play. “I got the kind of madness Socrates talked about,” she tells us. “A divine release of the soul from the yoke of custom and convention. I refuse to be intimidated by reality anymore. After all, what is reality anyway: nothing but a collective hunch. In my view, it’s absurdity dressed up in a three-piece business suit.”

Well, okay. All praise to Wagner and Strong (and Tomlin, of course, who made Trudy something of a signature role) for humanizing people so often ignored, but after decades in which the population of the unhoused has only grown, along with our understanding of the role mental illness plays in the crisis, the holy fool approach can strike as both condescending and false. For all its emotional generosity, the character feels about as current as a VHS exercise tape.

The play’s time-jumping premise provides little assistance: The Search… is structured as a journey, of sorts, with Trudy, awaiting a visitation from some “space chums,” zapping in and out of the various characters she offers up to the aliens as clues in their quest for the signs of the title. We’re never quite sure of when, exactly, this is all supposed to be taking place – it certainly feels, more often than not, like the ’80s, but newly added references to Elon Musk and the internet confuse the matter. Would the comedy play better as a straightforward period piece? Clearer, maybe. Better, maybe not.

Performed on a mostly bare stage, with flashes of light and static sound effects signaling Strong’s zaps from one character to another, The Search… relies in large part on the performer’s versatility, and in that Strong does not disappoint. She doesn’t have Tomlin’s genius for vocal dexterity – who does? – but she’s a fine actress, delineating each character gracefully and convincingly. The costume design by Anita Yavich, with one or two key, if small, garment changes aiding in the character definitions, fails only once: Teenage punk goddess Agnus Angst would sneer in disgust at the uncool harness of day-glo party-sticks she’s strapped into.

That stumble aside, the production flows smoothly under Silverman’s direction, and Strong – who stole the fall season of SNL with her extraordinary “Clown Abortion” sketch on Weekend Update – commands the venue with an ease that betrays no hint of intimidation by anyone’s ghost. Let the search begin for her next life on the stage.

ABC Says Show Will Have A Host This Year; Glenn Weiss To Direct For Seventh Straight Time

Lates News:
2022-01-12
Previous Post: Why This World Chess Champion Believes Bitcoin Is Very Likely To Replace The Dollar Within A Decade
Next Post: Rolls Royce hit record high sales during the pandemic