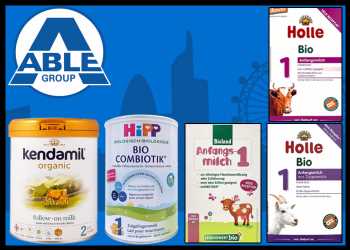 Able Groupe is recalling certain products labeled as infant formulas as they have insufficient iron levels as per requirements for infant formula in the United States, the U.S. Food and Drug Administration said. The recalled products also do not meet other FDA Requirements.

The recalled products are products intended as a complete or partial substitute for human milk for children 12 months old and younger. But, the required pre-market notifications for these new infant formulas have not been submitted to the FDA.

These contain less than 1 milligram of iron per 100 Calories and may not provide adequate iron for some infants, particularly infants born prematurely or with a low birth weight, those who had low iron levels at birth, or those who are at risk for becoming iron deficient due to illness.

According to the agency, inadequate intake of iron during infancy may lead to iron deficiency anemia, which, if untreated, has irreversible cognitive and functional development outcomes.

In addition, these 8 infant formula product labels, which contain less than 1 milligram of iron per 100 Calories, do not include the required statement on the label indicating that additional iron may be necessary.

Also, all of the infant formulas distributed by Able Group are not labeled as required by 21 CFR 107.10 and 107.20 and do not bear mandatory labeling statements in English.

The affected products were imported from Europe and distributed to consumers in the U.S. through mail services. The products were purchased through the littlebundle website, and were not available at any retail store. The company began distributing the products on May 20, 2021. Approximately 76,000 units were distributed.

Consumers who have these products at home are asked to safely dispose them.