March was going out like a lion in the eastern U.S. on Wednesday: Severe storms are possible in the Southeast; snow is likely in the Northeast.

About 45 million people are in the risk areas for severe weather, according to the National Weather Service’s Storm Prediction Center, and damaging winds and a few tornadoes are the main threats, especially from Mississippi to the Carolinas.

Heavy rain could also trigger flooding in portions of Tennessee still recovering from last weekend’s deluge and floods that left at least seven people dead. The National Weather Service issued a flash flood watch for much of Tennessee along with parts of surrounding states.

Rainfall totals of 1 to 2 inches, with locally higher amounts, are forecast from southern Mississippi to the southern Appalachians.

Meanwhile, a blast of unusually cold air is poised to roar across the eastern U.S. over the next couple of days, making early April feel more like the middle of February, AccuWeather said. Temperatures will be 15 to 25 degrees below average, the weather service said, and many record lows are forecast to be tied or broken throughout the South and Mid-Atlantic states. 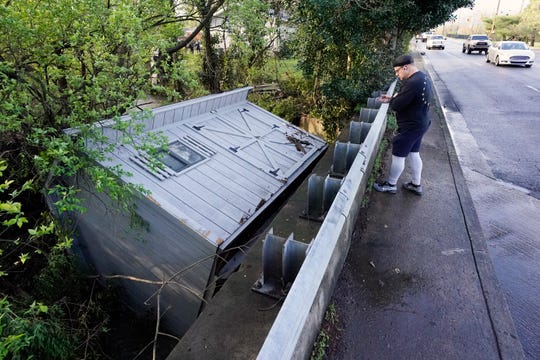 Adam Wirdzek stops to look at a utility building that was carried down a flooded creek Sunday, March 28, 2021, in Nashville, Tenn. Heavy rain across Tennessee flooded homes and roads as a line of severe storms crossed the state. (Photo: Mark Humphrey, AP)

Freeze warnings and frost advisories are in effect across portions of the Midwest and South for both Thursday and Friday mornings. The bitter cold could lead to damage to early season crops and foliage.

It may look like a late April Fool’s prank, but we assure you the chilly temps in Friday’s forecast are no joke. Daily records over the eastern US may be broken as lows dip 10 to 15 degrees below normal into the 20s and 30s while parts of the South could experience a late freeze. pic.twitter.com/tGCK8qCA1M

Snow will accompany the cold in portions of the Appalachians and New England.

A winter storm warning was in effect for portions of upstate New York, where some spots could pick up as much as a foot of snow on Thursday and into Friday, the weather service said. Enough snow to shovel and plow is possible in cities such as Rochester, Syracuse and Binghamton, New York, AccuWeather said.

Elsewhere, the western and central U.S. will see a tranquil end of March and beginning of April with virtually no precipitation forecast, the weather service said. A warming trend will also lead to well above-average temperatures to pair with the dry weather.