It’s been a strong, but fluctuating year for Bitcoin. From beginning the year at just over $7,000, to rising above $10,000 twice before dropping by almost 50 percent to $3,800 in March and then seeing a staggering recovery followed by a push above $12,000 in August, the Bitcoin markets have been as roller coaster-like as ever. But, does this volatility have a favorite day?

Well, looking at the data from the beginning of the year to this past weekend (26 September), the most volatile day, measuring for the day-to-day deviation in the price of Bitcoin, has been Thursday, and the least volatile day, has been Saturday. Seems like Bitcoin gets too eager, too quick for the weekend, and spirals out before Sunday!

Looking at the deviation, not difference, and averaging the same for the total number of specific days of the week, Thursday has the highest fluctuation of an average of $239 a day, as a percentage of price that’s a deviation of 2.81 percent. No other day has a deviation of more than 2 percent, other than Thursday. 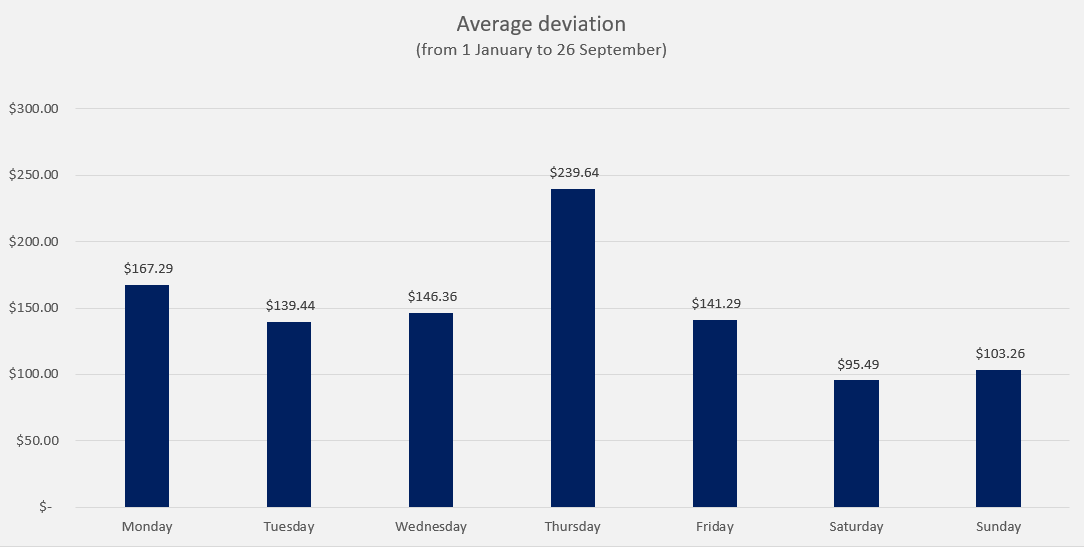 With this as the upper extreme, Saturday had the least, with a deviation of less than $100, at $95 every Saturday for the year till September. The rest of the days, in order of most to least volatile were – Monday, Wednesday, Friday, Tuesday and Sunday.

Unsurprisingly, the main reason Thursday is the most volatile was because of one Thursday out of the 39 Thursdays this year – 12 March, referred to aptly as ‘Black Thursday.’

Taking this entire week out i.e. from 8 March to 16 March, thereby ensuring a single date from each day is removed from the overall data set, we get a different volatility pecking order, with Monday leading the way this time around. However, Thursday, still takes the second spot as the second most volatile day, even if we take out ‘Black Thursday.’ 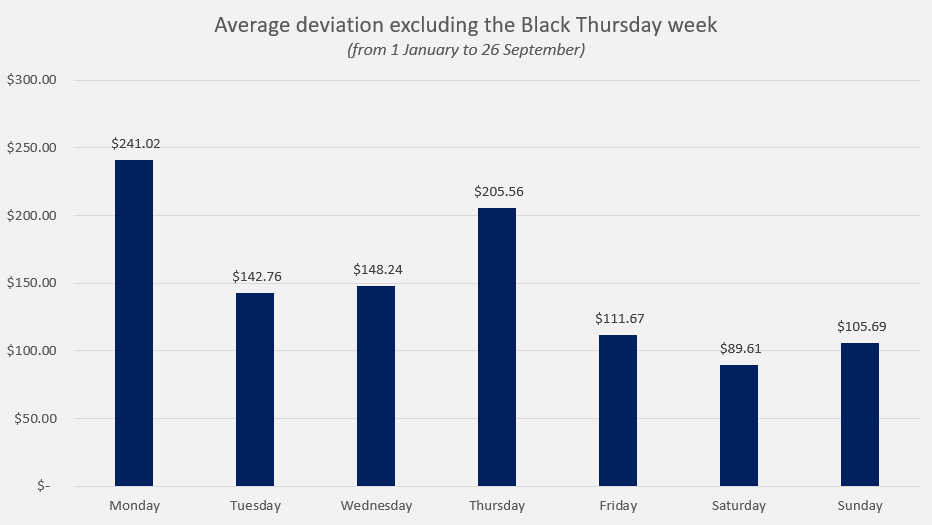 The volatility pecking order for the remaining days would go like this – Wednesday, Tuesday, Friday, Sunday, with Saturday still accounting for the least price deviation and hence, the lowest volatility among all trading days since the beginning of the year till date, while normalizing for the volatile-heavy week of 8 March to 16 March.

But once again, we all have our favorites. Even if you don’t, this might help you pick yours.