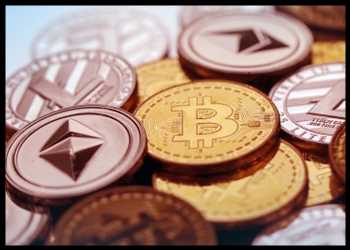 Cryptocurrencies edged down early on Friday amidst lingering concerns over the macroeconomic situation, particularly inflation and monetary policy. Markets are anxiously waiting for the non-farm payrolls data from the U.S. later on Friday for indications on the strength of the labor market and its likely influence on the tone of Fed’s monetary policy. Also adding to the anxiety surrounding inflation is the recent output cut by the OPEC+, aimed at supporting crude oil prices that had fallen amidst deep concerns over global fuel demand.

In the FOMC statement issued at the time of the Fed’s interest rate review in September, the Fed acknowledged the robust job gains in the recent months as well as the low unemployment rate. Risk markets are hoping for a loosening in job market conditions that would goad the Fed to tone down its harsh monetary policy stance.

Overall crypto market capitalization is currently at $957 billion, versus $970 billion a day earlier.

BNB (BNB) reverted to the fifth position overall, following a 3.63 percent slide in prices in the past 24 hours. The sharp move is amidst Binance Smart Chain suspending service after an estimated $100 million was drained in an exploit affecting the native cross-chain bridge between BNB Beacon Chain (BEP2) and BNB Smart Chain (BEP20 or BSC), known as “BSC Token Hub.” The coins taken in the hack were not pre-existing BNB from user wallets, but instead BNB created by the attacker through the exploit. Market cap of BNB is currently at $45.8 billion versus $47.5 billion on Wednesday.

Casper (CSPR) extended gains with a 10.6 percent overnight surge and jumped 6 slots to the 93rd ranking overall. The Casper Network, a layer one Proof-of-Stake blockchain built off the Casper CBC specification, that aims to usher in a new era for Web3 has gained close to 20 percent in the past week and 13 percent in the past quarter.

64th ranked Helium (HNT) is the greatest laggard in the top 100 category with an overnight decline of more than 6 percent. The crypto coin tagged to the Web3, Enterprise Solutions, Distributed Computing and IoT industries has lost 4 percent in the past week and 47 percent in the past 90 days.

Meanwhile, South Korea has made the first arrest in the case related to the Terra fiasco. The Head of General Affairs at Terraform Labs has been charged with violating the capital markets law, fraud and breach of duty and arrested. Meanwhile, CEO Do Kwon’s passport has been officially voided by South Korea, amidst an Interpol red notice.