On 3rd August, Justin Sun, the Founder and CEO of Tron Foundation, announced that the TRX tokens can now be used in over 2000 stores in Italy and Spain. The payment machine works with a voucher model where a customer is asked to purchase a voucher from a store that accepts tokens which can later be redeemed for cryptocurrencies.

“Thanks for the support to #TRON. Now you can buy $TRX #TRX at over 20000 stores in Spain and Italy or at Bitnovo” 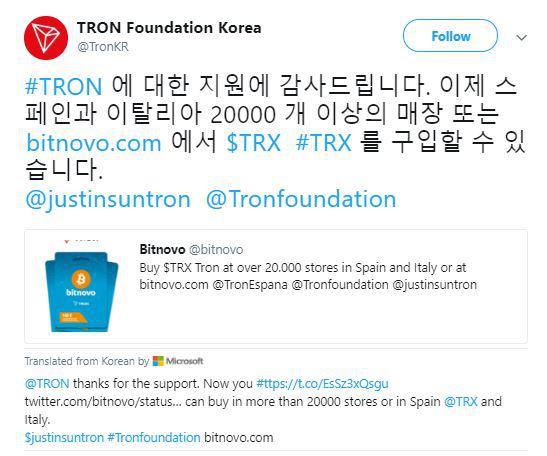 The Foundation has stated that Bitnovo, a cryptocurrency platform, is responsible for the trading of the TRX tokens in these countries. Bitnovo also enables users to trade in other cryptocurrencies such as Bitcoin, Ethereum, and Litecoin.

The market chains that accepts TRX in Spain and Italy include Carrefour, FNAC, and Game. Moreover, Bitnova claims that they hold the security in the highest regard and to extend that they have appointed a special cryptocurrency security team.

Moreover, Justin Sun also revealed the secret project, Project Atlas. The project is going to enable 100s of million users of BitTorrent to be a part of the Tron ecosystem. This is considered as one of the biggest achievements of Tron in the community as Satoshi Nakamoto, the creator of Bitcoin [BTC] had also mentioned BitTorrent in one of his emails.

Tron was also in the news for the launch of the Tron Wallet on the Google Play Store making the application available for Android users before Apple users. The wallet was developed by the Tron Foundation in association with Getty/IO, a software company.

“i don’t recommend bitnovo, if you have no choice fine, but if you have it, you better take the long way , it will be more profitable.”