When Chainlink was heading down after climbing to its $20 summit in August, market critics were quick to write it off, with some suggesting that the crypto-asset will lose 90-100% of its value within the next few weeks.

Fast-forward to October 2020 and one can see that Chainlink has managed to maintain its position in the top-10, outperforming the likes of Litecoin and Bitcoin SV, and proving some of these “experts” wrong. In fact, Santiment recently highlighted LINK’s improving on-chain data, with the same corresponding with the crypto’s present price rise and a degree of optimism. As the value topped $10 once again, it is starting to gain attention once again.

However, two major factors have played an important role in Chainlink’s renaissance – Its defiance of Bitcoin and its re-bound from the possible bottom.

Evaluating Chainlink and its bottom

According to market structure, at the end of a bullish rally, a digital asset will possibly undergo a 60% to 70% decline in the next few weeks or months. If the valuation registers a constructive bounce from the 60-70% range, the bottom is considered a strong base for the next rally. For Chainlink, something similar unfolded.

After topping its valuation at $20 on 17 August, Chainlink dropped down to $8.3, i.e 60% from the top. As illustrated in the chart above, the price registered a couple of spikes from $8.30, following which, it is currently dealing with the overhead resistance thrust by the 50-Moving Average.

What’s important here is the fact that LINK maintained a base at $8.30(at 60%), without further depreciation, a level that could be inferred as a bottom, a bottom from where the next rally will ascend.

This was a popular discussion a few months back, one that remains relevant to this date. Between June and October, Bitcoin and Chainlink both suffered temporary bouts of flash hikes and spikes, but the correlation between BTC-LINK has continued to drop. At press time, it was as low as the figures before the March 2020 collapse.

This further proves that Chainlink’s market hasn’t completely subsided under Bitcoin’s dominance over the past couple of months, unlike other altcoins. Apart from a minor hike in price towards the end of August, LINK has continued to distance itself from Bitcoin’s impact on the market. 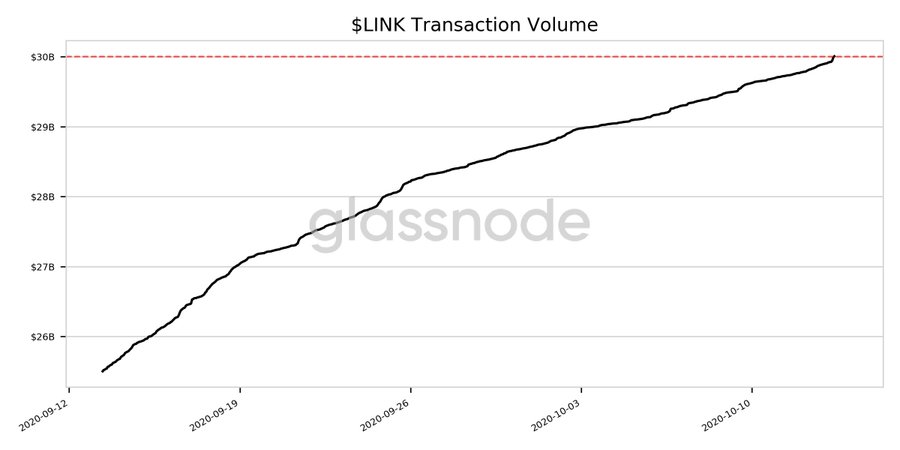 Finally, from a point of activity, the cumulative LINK transaction volume went above $30 billion over the past 24-hours, indicative of consistent activity in the space. Right now, if a collective bullish trend takes over, Chainlink is putting itself in the right position to attain another period of towering highs.