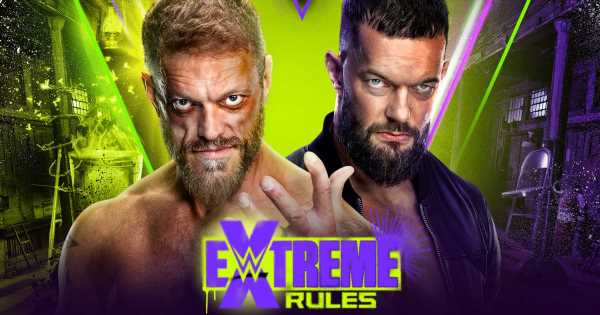 WWE Extreme Rules airs tonight night with fans readying themselves for a series of high-profile match-ups.

With WWE now very much under the creative control of Paul ‘Triple H’ Levesque following the retirement of Vince McMahon, the product continues to evolve at a pace.

SummerSlam at the back end of July was all but rubber stamped before McMahon stepped aside, while Clash at the Castle in Cardiff last month proved a solid start to the Levesque era of Premium Live Events.

Now Extreme Rules has the task of bettering that and, as things stand, the six-match card features plenty to whet the appetite – even if there is no Roman Reigns.

The Undisputed WWE Universal Champion isn’t involved on Saturday but will be back to headline Crown Jewel in Saudi Arabia in November, defending against Logan Paul.

The honour of trying to steal the show on Saturday goes to the likes of Bianca Belair and Bayley who tangle for the Raw Women’s Championship, and The Brawling Brutes who go to battle with Imperium.

Ahead of Extreme Rules, here’s the Daily Star take on what’s on the card, along with our bold predictions. Morgan started out as something of an unlikely champion following her shock cash-in victory over Rousey at Money in the Bank in July.

Since then, WWE has done a good job of reinforcing and solidifying the run. While Morgan was less than emphatic in her win over Rousey at SummerSlam, she did down Shayna Baszler in something of a surprise in Cardiff at Clash at the Castle.

Overcoming the odds is very much Morgan’s thing and, having shown in recent weeks that she’s capable of getting ‘extreme’, there’s at least a slightly more level playing field going into Saturday.

Baszler still remains in this mix having been baited by old pal Rousey in recent weeks and it’s hard to see a way she doesn’t involve herself in this one in some way.

It would seem odd for WWE to take the title from Morgan after spending the last couple of months building her up, and all honesty Rousey needs the gold less than she does. With that in mind, I see Morgan taking home her title, even if it’s not clear-cut. One name reportedly high on the wish list of returnees to WWE for Triple H after assuming control of the ship was Karrion Kross – ruined slightly under McMahon’s rule on the ‘main roster’ after a stronger showing as NXT Champion.

His first major feud since coming back is with Scot Drew McIntyre, who hasn’t quite yet settled back into the groove after coming up on the losing end of the main event at Clash at the Castle last month.

Admittedly, it was going to take a lot to follow that for Big Drewe, but while this is a far cry from the main event scene, the two have given their all and it will be fascinating to see whether the Scottish Warrior gets the nod here to stop him sliding a little, or if Kross will continue his upward climb at his expense.

Strap matches are far from unheard of in WWE, but they’re one of the rarer stipulation matches, so it’s a solid addition to the line-up and should make for a heavy-hitting affair. Look out for welts aplenty in this one! One of WWE’s strengths over the last couple of months has been the consistency and regularity of long-term storytelling. An example of one feud that’s benefitted as such is Matt Riddle and Seth Rollins, who have been tangling for quite some time.

That their SummerSlam match was pulled close to the show raised some eyebrows, but giving it time to breathe proved a masterstroke – they tore the house down at Clash at the Castle when Rollins came on top, and this is another Match of the Night candidate for Extreme Rules.

Rollins, such is his star power and charisma, seems almost impervious to the impacts of winning or losing matches in WWE. His Cardiff success was his first Premium Live Event victory in an eternity and richly deserved – but it’s hard to see a way in which Riddle doesn’t go over on Saturday to help round off their rivalry.

Daniel Cormier is the special guest referee for their Fight Pit Match and will almost certainly interject himself physically, which is just about the only way Rollins might emerge with the W.

Bianca Belair, physically dominant and one of WWE’s most popular champions, is in the midst of a career-making title reign and oozes just about everything you could need in a title holder.

She goes up against Bayley who heads into a first title match since her return to the ring earlier this year after a lengthy lay-off.

The Role Model has wasted no time reminding fans as to her value as a performer on the mic and in the ring, and the temptation to hoist her back into one of the top spots quickly must be great.

Triple H is a known admirer of both performers, and the added stipulation of this being a ladder match gives it a greater sense of unpredictability – we’d go far enough to say this one is a real 50/50.

A win for Bayley makes a real smash of her comeback while leaving more than enough time for Bianca to come back fighting, while a win over one of WWE’s hottest heels would elevate a sky-high Belair even further.

It’s impossible to even contemplate that any match on the Extreme Rules card will be harder hitting in its physical delivery than this collision between The Brawling Brutes and Imperium.

These six men have whacked and bashed one another for weeks, including a five-star rated bash-fest between Sheamus and Gunther at Clash at the Castle.

As we pen these predictions, the Intercontinental title match occurred between the pairing on the Season Premiere episode on SmackDown on Friday night.

Sheamus was unable to snare the gold from Gunther on television, similar outcome to the match on home soil at a PLE. Another match that stems firmly from Clash at the Castle is the war between Hall of Famer Edge, his pal Rey Mysterio and the evil Judgement Day.

Saturday sees de facto Judgement Day leader Finn Balor meet Edge in an I Quit match – and another outing that seems too close to call in terms of the direction WWE will choose.

Mysterio, Edge and Judgement Day have been at it for quite some time now, and while Dominik Mysterio’s build as a heel still has some way to go, it seems unlikely Edge and Balor will cross swords many more times after the weekend.

Judgement Day have left Edge laying enough times to leave one thinking there’s limited value in playing that out again here, but similarly there aren’t too many plus points to having part-time star Edge put a major puncture in the faction’s momentum.

Could the factor here be something unexpected? Be it Rey costing Edge, or AJ Styles getting involved after being another recent Judgement Day target. It’s a plus point for WWE right now that the possibilities are plenty.

WWE’s Extreme Rules is taking place on Saturday 8th October at the Wells Fargo Centre, Philadelphia…. Tune in via the WWE Network : or on BT Sport.