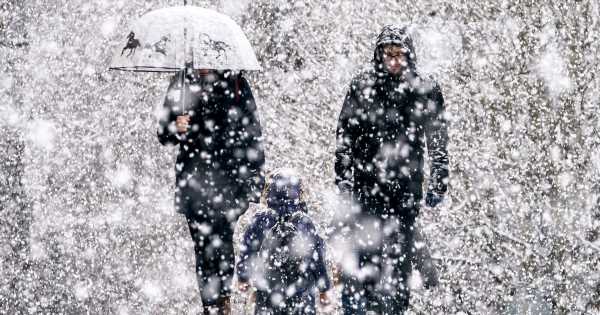 Temperatures have plummeted across the UK as a cold snap hits the country, bringing snow and icy conditions with it that could cause transport delays and disruption, the Met Office has warned.

In an update on how long the cold weather is set to last, the forecaster has now said that temperatures in some areas could plummet to as low as -10c, with icy conditions sticking around for at least a week as cold air from the Arctic travels across the country.

The Met Office has issued yellow weather warnings for snow and ice in areas across the UK for Thursday and Friday, predicting chilly daytime temperatures that could drop to double-digit sub-zero temperatures in the evening.

READ MORE: Met Office warns of up to 15cm of snow as Troll of Trondheim launches Arctic blast in UK

He added: ÃÃÂ¢Yellow National Severe Weather Warnings for ice and snow have been issued for parts of Scotland, Northern Ireland, Wales and the east coast and South West England. Showers will turn more wintry with an increasing risk of snow as the week progresses, particularly in coastal areas or over higher ground.

"There will be widespread frosts with temperatures falling to as low as -10ÃÃÃÂ°C overnight in isolated spots by the end of the week."

The weather expert also warned that "more severe weather warnings may be needed as we head through the week".

Met Office Deputy Chief Meteorologist, Jason Kelly, predicted that the blistering weather could extend into next week, he said: Through the weekend and into next week cold weather will continue, with an ongoing chance of wintry showers, mainly for coasts, and freezing fog patches inland.

An area of low pressure may then threaten southern and southwestern parts of the UK through mid-week. Confidence in the exact track of this system is low, but should it push precipitation into the UK, then this would readily turn to snow, with a lower chance of freezing rain.

"How far north the milder air gets is also open to a lot of uncertainty, but for now, many central and northern areas are likely to remain in the Arctic airmass. "

The cold snap comes after British Weather Services meteorologist Jim Dale warned last week that a cold Scandanavian breeze dubbed the "Troll of the Trondheims" was on its way to the UK, with the potential to cause "blizzards and difficulties".

Describing how the icy weather will hit the UK, he told the Daily Star: "Scotland goes under first and in the weekend that then falls, thatÃÃÂ¢s next weekend, it starts to affect areas in the north of England and maybe North wales."

He said that there's a possibility the cold weather could last well into the festive period as he urged people to "get your shopping in early, get your food in early", to avoid the risk of travel disruption as temperatures drop.

Amid the ongoing cold weather, the UK Health Security Agency (UKHSA) issued a Level 3 Cold Weather Alert on Wednesday, covering England until Monday, December 12, during which they said there is a "90% probability of severe cold weather and icy conditions".

They have urged people to "look out for friends and family who may be vulnerable to the cold" and to try and maintain indoor temperatures to at least 18C.