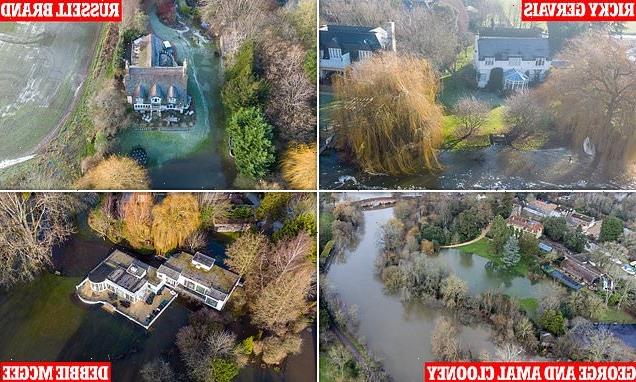 Tensions rising: The River Thames is just FEET away from the multi-million pound mansions of Russell Brand, Ricky Gervais and George and Amal Clooney… as Debbie Daniels’ home lies under water

Celebrities who have settled in the countryside alongside the banks of the River Thames will have done so for the usually unmatched peace and quiet along with beautiful riverside views.

But famous faces including Ricky Gervais, George Clooney and his wife Amal, Russell Brand are facing the threat of their homes in Berkshire and Oxfordshire being flooded after water levels rose following heavy rainfall – and Debbie McGee’s riverside house has already flooded.

Up to 15 flood alerts have been issued along the Thames by the Environment Agency, who have told residents in at risk areas to be prepared for the worst as flooding is possible.

Among the homes threatened is the UK residence of actor George Clooney, 61 and his lawyer wife Amal, 44, whose Grade II-listed mansion sits on an island in the Thames which has again become very small after the river burst its banks. 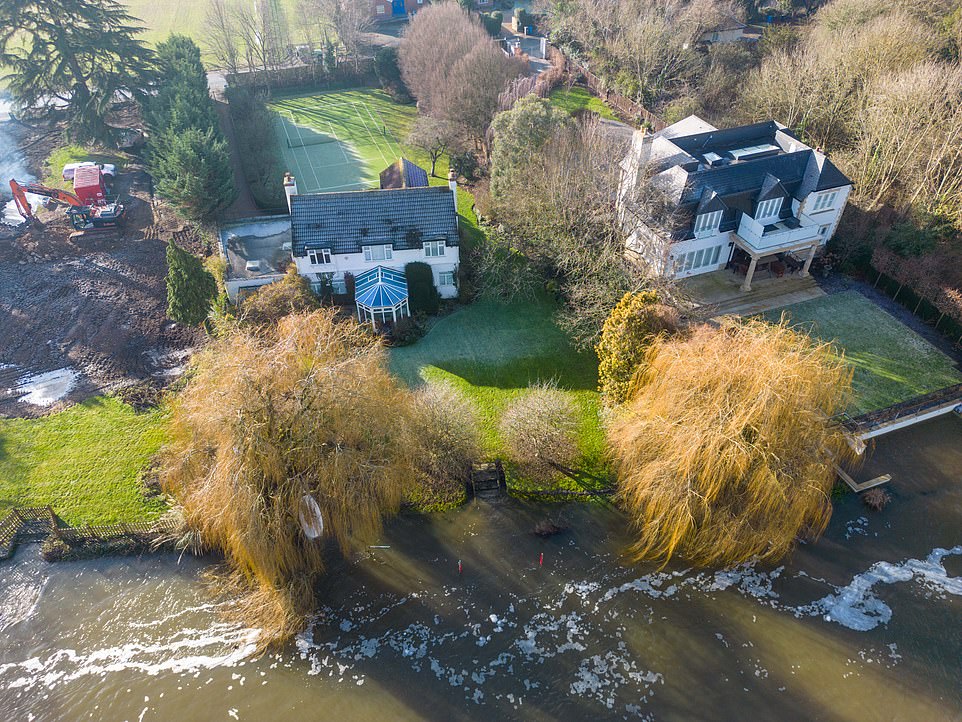 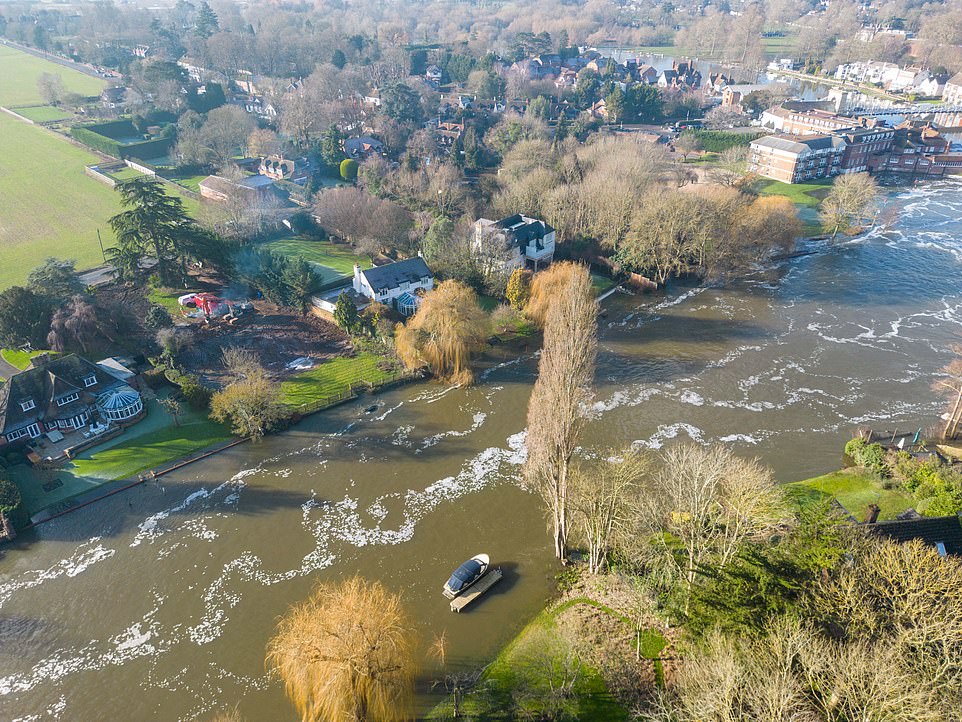 The steps separating the river from 61-year-old comedian Ricky Gervais’s garden had become partially submerged, but the garden itself is had not succumbed to the river 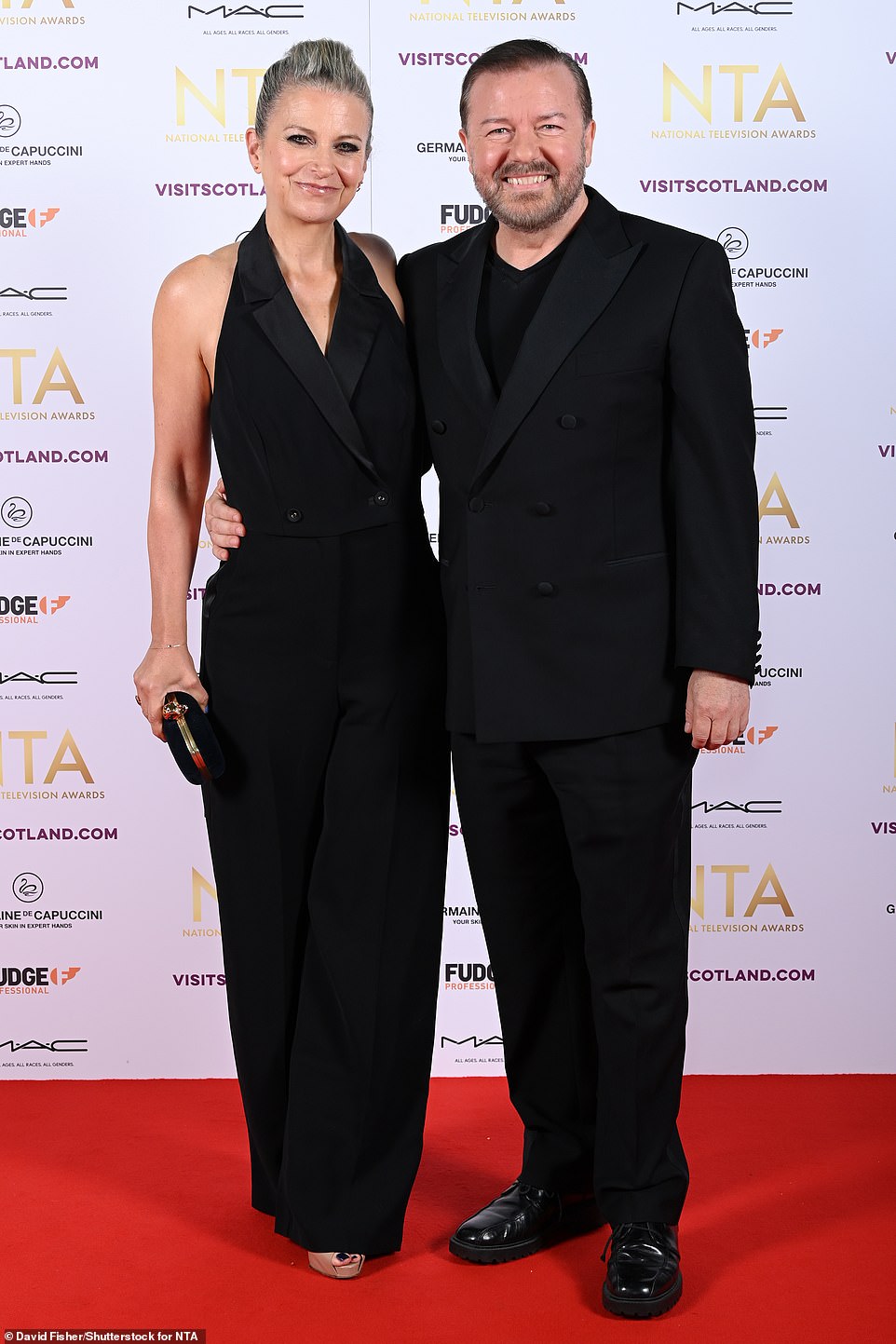 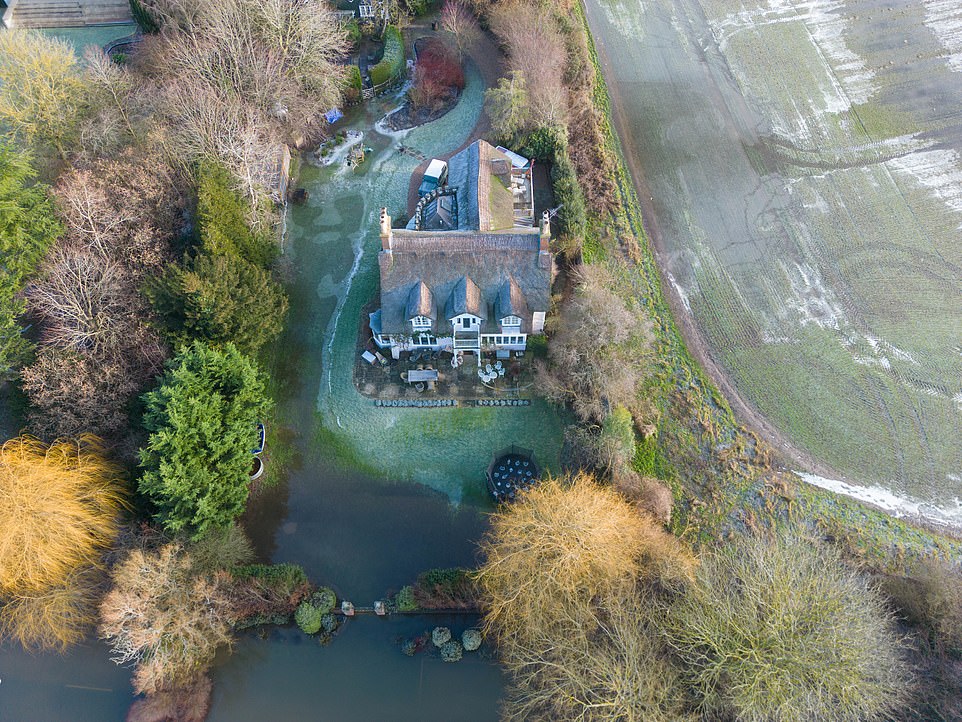 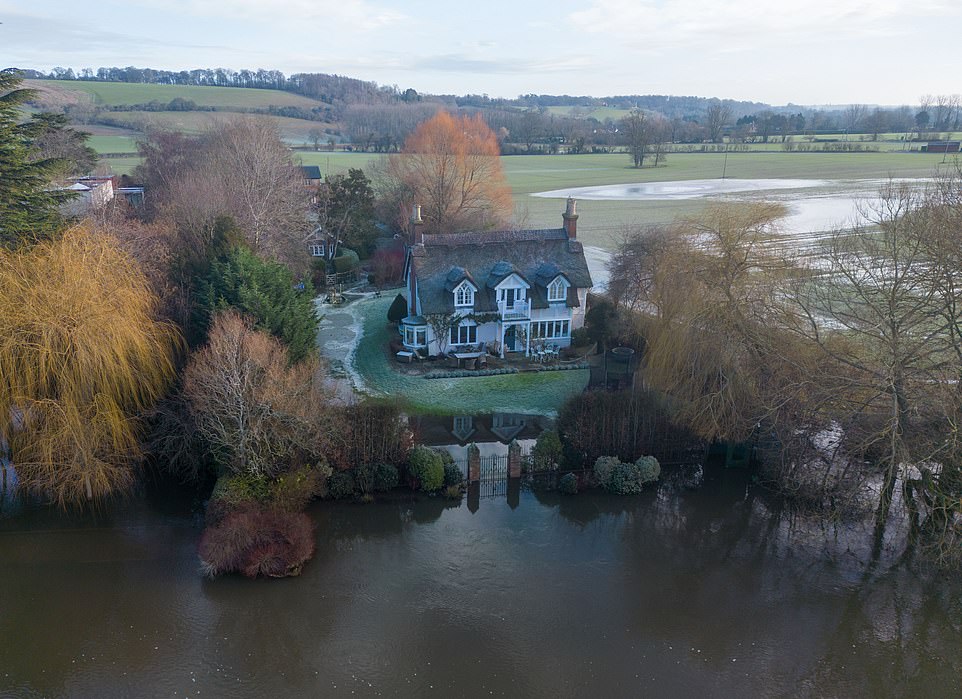 Water was pictured creeping towards the back door of Brand’s home, but the raised level of the house should hopefully protect it from the water 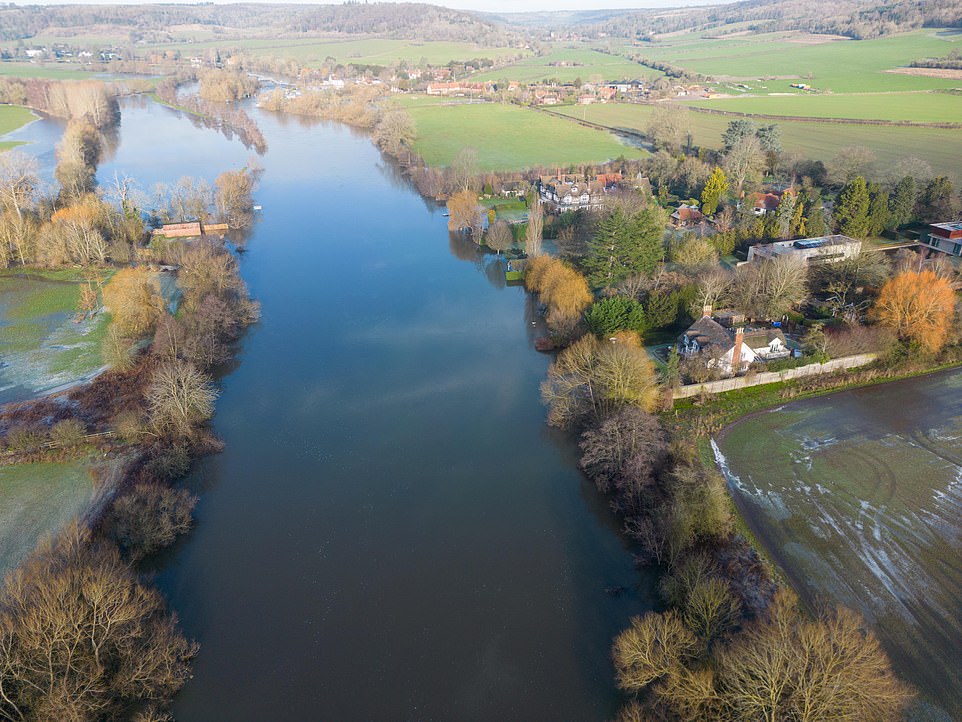 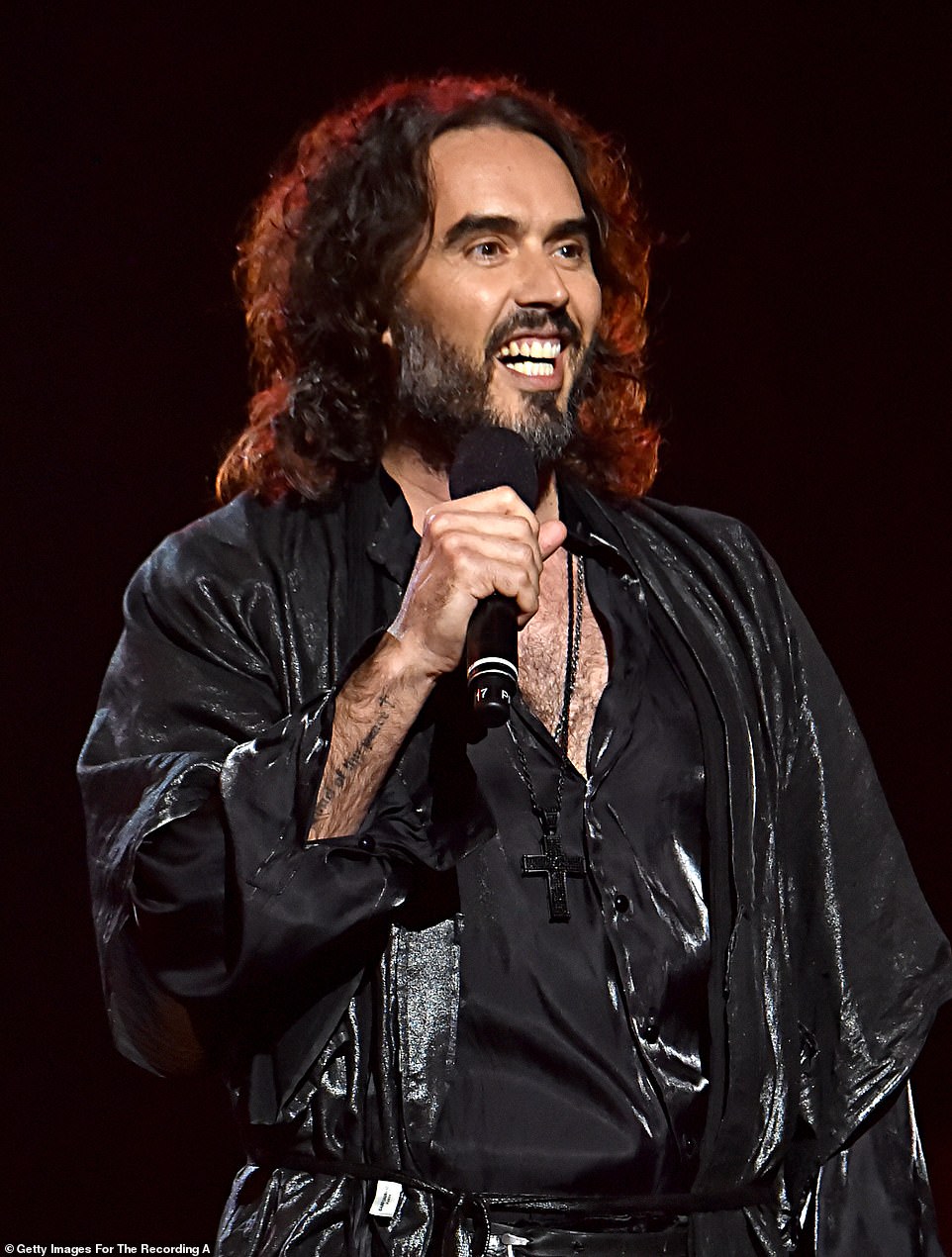 The couple’s £12million home is in an area notorious for flooding, although the house itself is raised above the garden, so would appear to be less at risk itself despite the garden being flooded.

Comedian Ricky Gervais’s riverside home – where he lives with partner Jane Fallon – has also appeared to narrowly avoid becoming flooded after water crept up the banks towards his £2.75million house.

Photos showed the steps separating the river from the 61-year-old’s garden had become partially submerged, but the garden itself is had not succumbed to the river – with his house and tennis court looking mostly safe from harm. 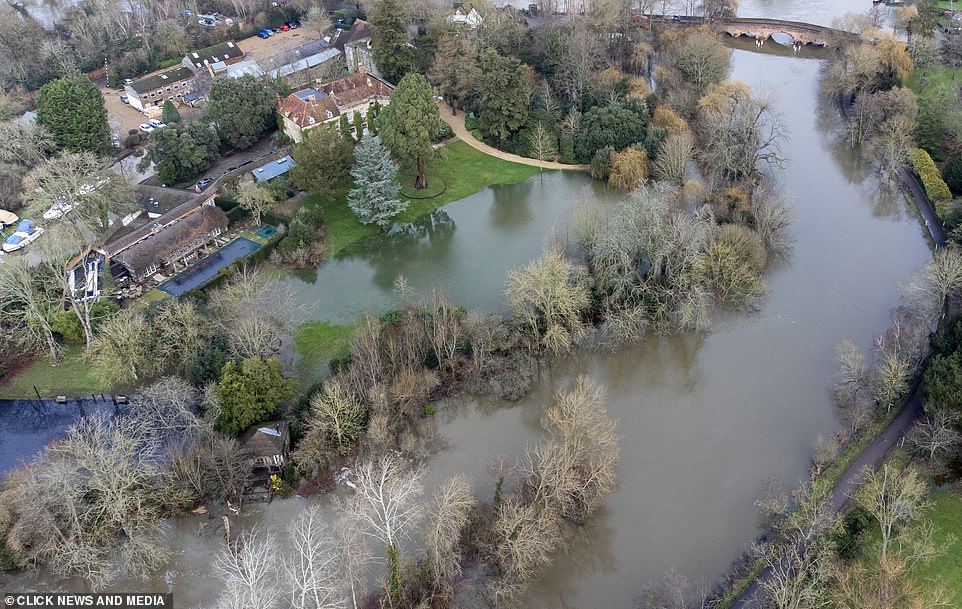 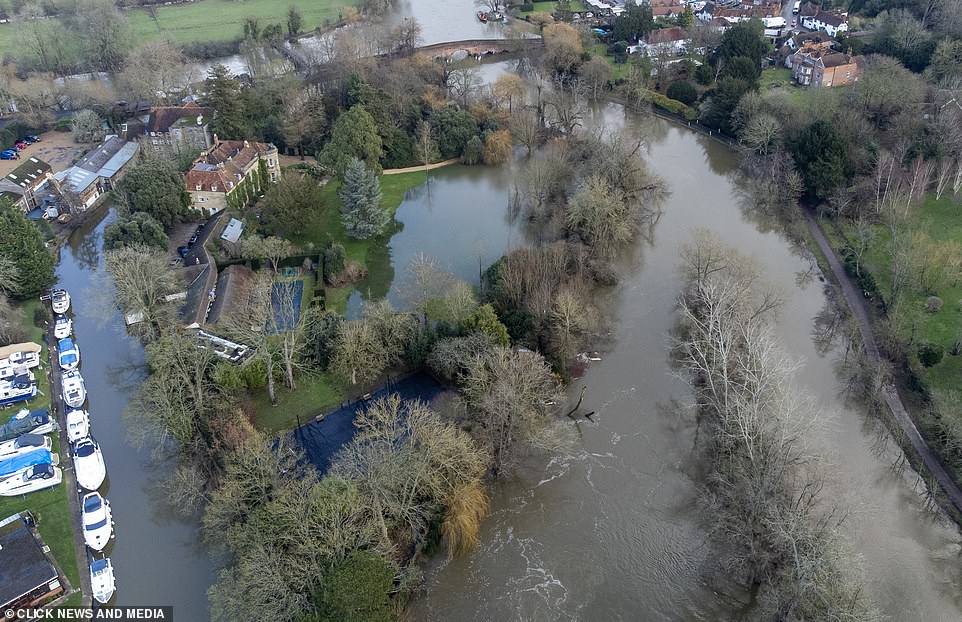 The Clooneys’ home  is in an area notorious for flooding, although the house itself is raised above the garden, so would appear to be less at risk itself despite the garden being flooded 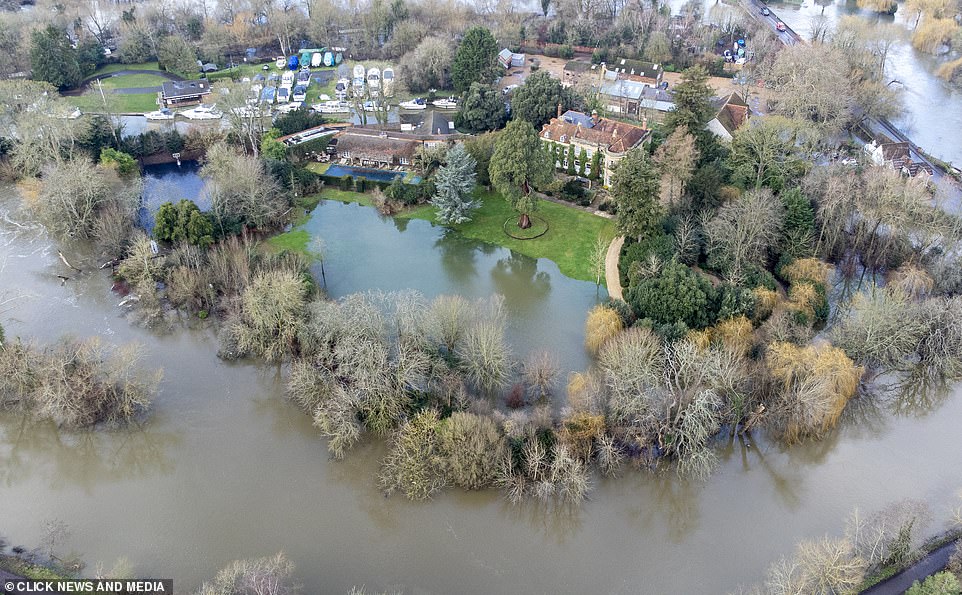 The Clooneys’ mansion is worth around £12million but they have to deal with flooding. The mansion is situated in an island in the middle of the River Thames 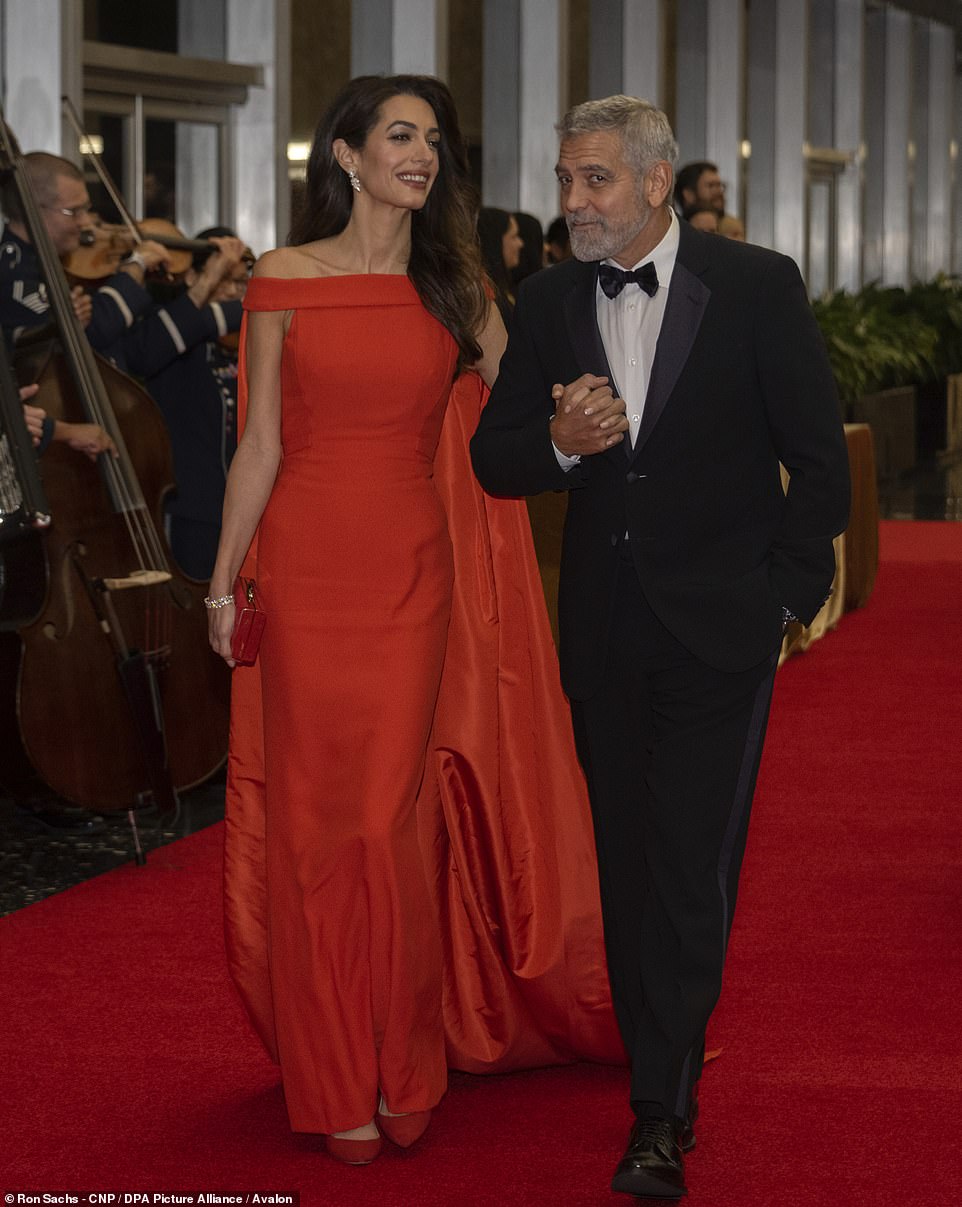 George Clooney and his wife, Amal arrive for the formal Artist’s Dinner honoring the recipients of the 45th Annual Kennedy Center Honors at the Department of State in Washington, D.C. on December 3 last year

Russell Brand’s £3million thatched cottage along the River Thames also appeared to be facing the threat of an incursion from rising water levels.

Photos show the 47-year-old comedian’s partially flooded garden with water mere feet from his back door and rear patio – as fields surrounding his multi-million pound home were fully underwater.

But Brand’s home appears to be on a raised level compared to the now partially submerged garden, which will offer some protection against the rising waters.

And Debbie McGee, widow of the late magician Paul Daniels, is facing flooding in her £3million home in Henley-on-Thames, Oxfordshire 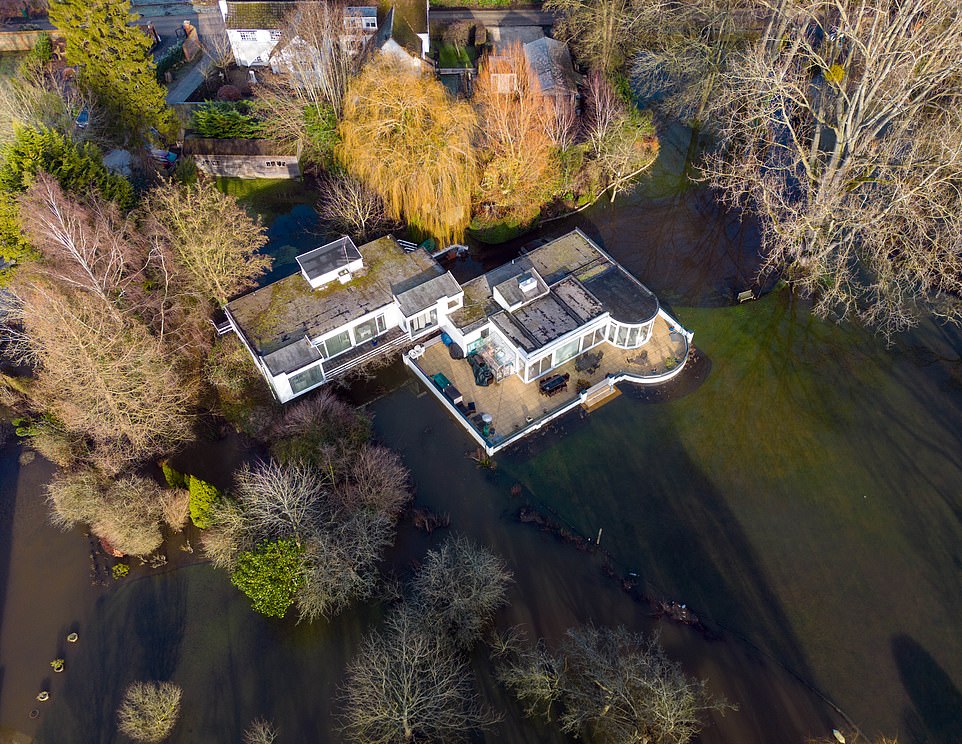 Debbie McGee’s £3million home in Henley-on-Thames, Oxfordshire she shared with late husband Paul Daniels has been hit by flooding 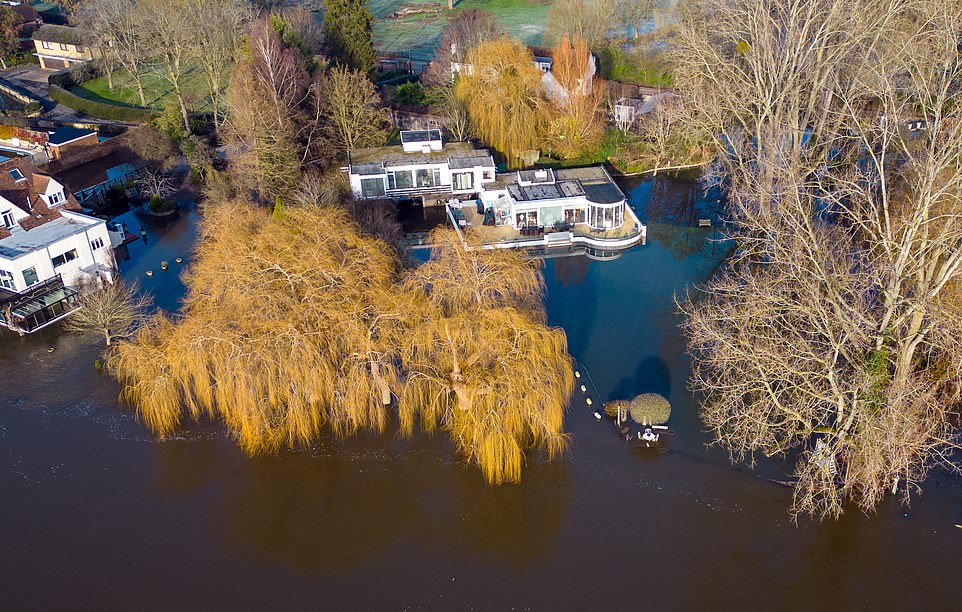 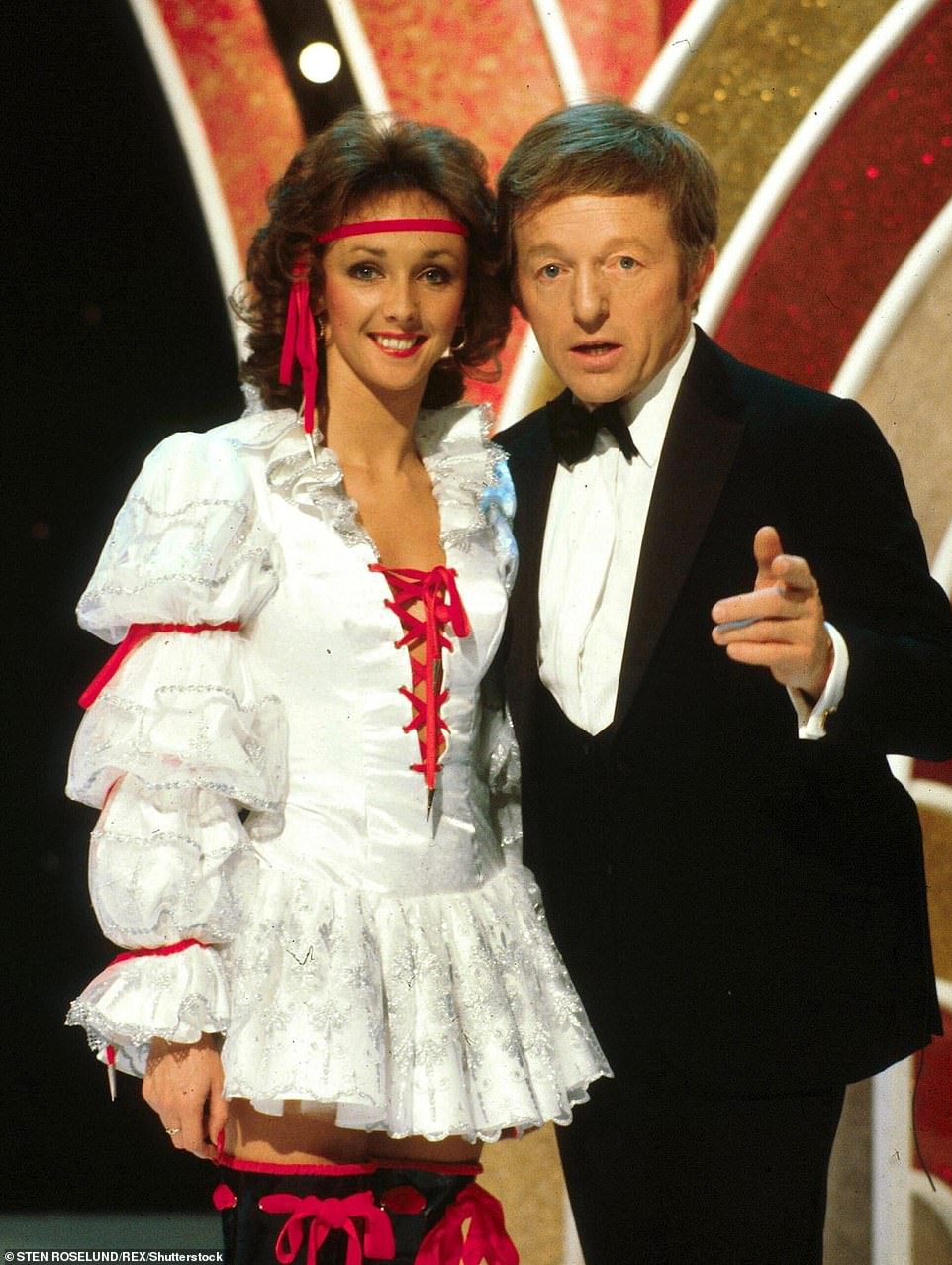 Speaking after her husband’s death, Ms McGee – who met Daniels when she was the assistant on his hit magic show – said the couple had enjoyed the marriage that ‘everyone dreams of’ and had stayed side-by-side sharing jokes until the end. Pictured: The pair together in 1983

Television personality Debbie, 64, worked as magician Paul’s assistant for years, with the pair first meeting in 1979 when she performed onstage with him at the Britannia Pier Theatre in Greater Yarmouth.

It is not the first time it has been deluged after similar problems back in February last year.

The flooding is understood to have left Debbie stranded indoors after water covered the entire grounds of the property.

Her husband magician Paul fitted a pump system many years ago to stop the water – but this time it seems too much rain has fallen as the garden and driveway are submerged.

And Britons were yesterday warned of Brits are warned of further travel chaos as the Met Office issued fresh ice warnings across the UK.

The forecaster said parts of Scotland, Wales, Northern Ireland and the South West of England will face icy conditions, with warnings in place until 10am yesterday.

It said there will be high chances of icy patches on roads, pavements and cycle paths, with injuries expected.