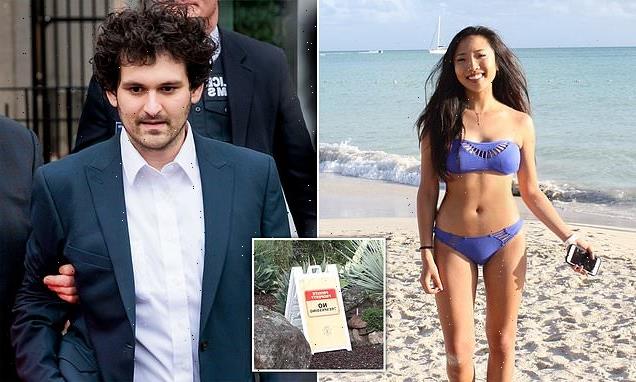 A glamorous crypto influencer who previously got Sam Bankman-Fried to open up about his polyamorous sex life became one of the first people to visit the disgraced FTX CEO on house arrest.

Tiffany Fong, who interviewed Bankman-Fried twice after FTX filed for Chapter 11 bankruptcy in late November said the disgraced CEO was ‘surprisingly optimistic’ when they spoke.

Bankman-Fried has been under house arrest at his parents’ $4million home in Palo Alto, California since December 23, after he was freed in a Manhattan court on a $250 million bond. The former CEO, 30, is facing securities and wire fraud charges related to his collapsed crypto exchange FTX.

He’s there after spending time in the notorious Fox Hill Prison in the Bahamas, which Fong said Bankman-Fried called difficult ‘with the lack of mental stimulation.’

Fong spoke to DailyMail.com about how the meeting came about, Bankman-Fried’s frustrations with prison life and his optimism for the future despite facing 115 years in prison if convicted. 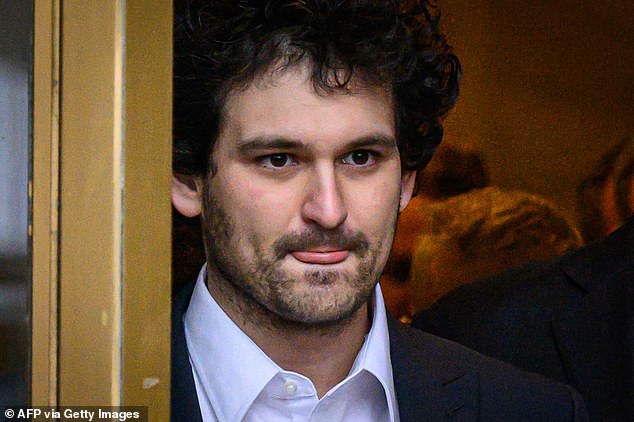 Tiffany Fong, who interviewed Bankman-Fried twice after FTX filed for Chapter 11 bankruptcy in late November, said the disgraced CEO was ‘surprisingly optimistic’ when they spoke

Fong said that she’d informed Bankman-Fried she’d be in San Francisco for the holidays to visit family and asked if he was allowed visitors. He affirmed, so they met Tuesday evening.

Despite the late night meeting and previous discussions of his sex life, Fong clarified that ‘we do not have an intimate relationship.’

It was reported Wednesday that Bankman-Fried is expected to enter a plea next week in response to criminal charges, which allege he defrauded investors and looted billions of dollars in customer funds at his failed cryptocurrency exchange.

Fong said that Bankman-Fried is ‘unsure’ if he will have to go to New York in person for the plea on January 3.

If convicted on all charges, Bankman-Fried is facing 115 years in prison.

Fong said: ‘He’s aware of the possibility of prison time, but it does not seem he wants to ruminate extensively on the worst case scenario: a lifetime in prison. I believe he feels that internally spiraling about the possibility would be an unproductive use of his time.’

Following his December 12 arrest in the Bahamas, Bankman-Fried was held in the notorious Fox Hill Prison, where inmates are reportedly crammed in cells with multiple other inmates, without access to running water or other means of basic hygiene. 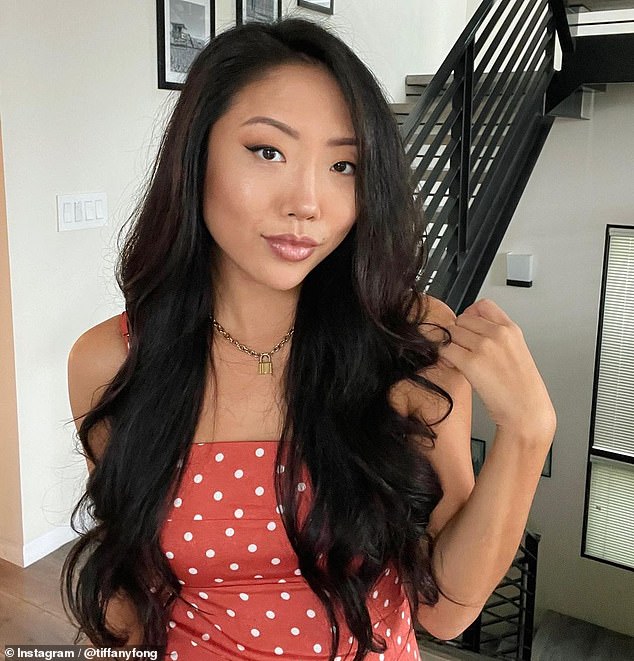 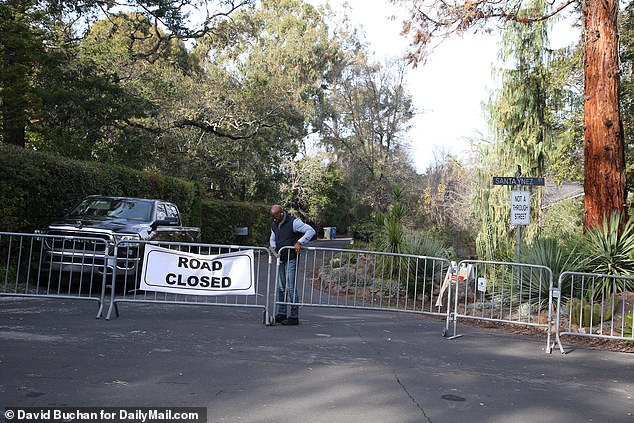 The home of Sam Bankman-Fried’s parents on the edge of Stanford University’s campus in Palo Alto in Stanford, California where he is currently under house arrest 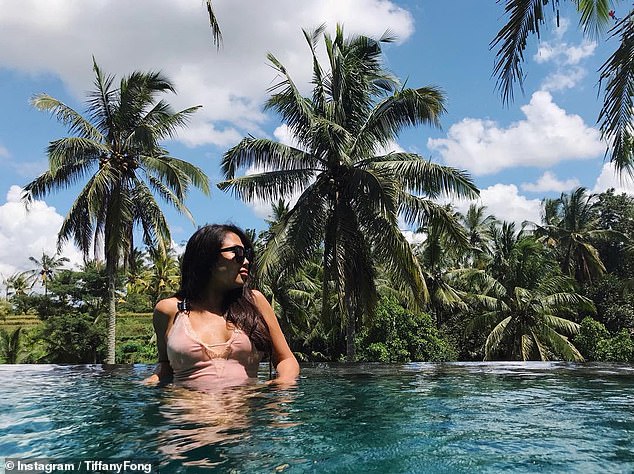 Fong said that she’d informed Bankman-Fried she’d be in San Francisco for the holidays to visit family and asked if he was allowed visitors. He affirmed, so they met Tuesday evening 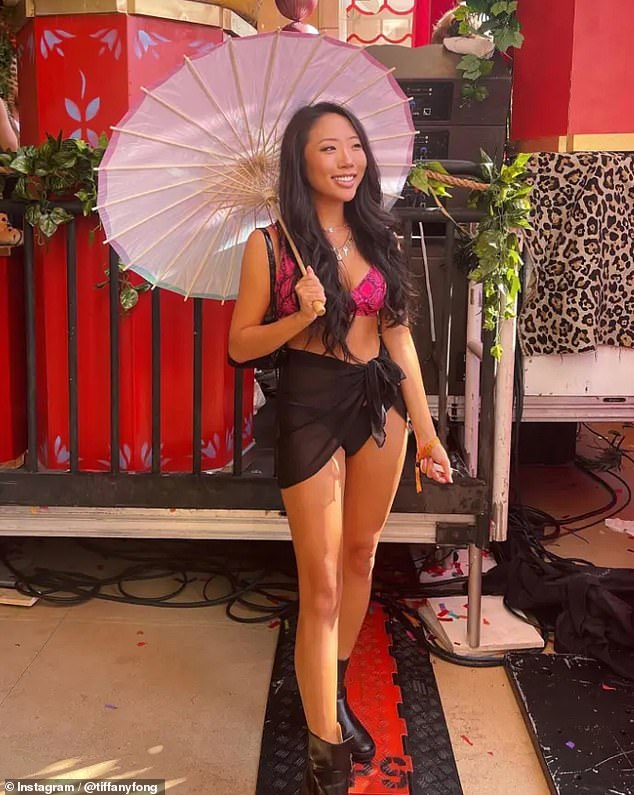 Despite the late night meeting and previous discussions of his sex life, Fong clarified that ‘we do not have an intimate relationship’ 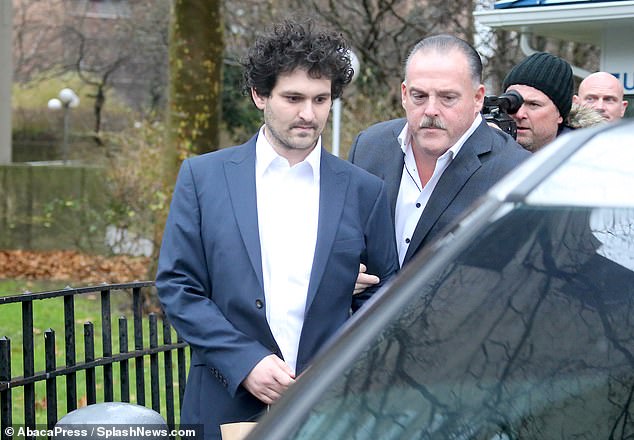 Fong said of his prison experience: ‘He obviously did not enjoy his time there. It overall seemed that he had more difficulty grappling with the lack of mental stimulation in Fox Hill than the physical conditions and environment.’

It was earlier reported that Bankman-Fried was held in the sickbay at the prison – dubbed ‘Fox Hell’ by fearful locals – where he reportedly received preferential treatment over other inmates.

The embattled crypto crook reportedly had access to his own toilet, running water, a TV, local newspapers, crossword puzzles and a host of other perks – including food that adheres to his vegan lifestyle.

She also noted that while she’s sure his parents ‘are having a difficult time, he’s mentioned that they’ve been continually supportive.’

On Wednesday, Fong, 26, tweeted: ‘I met with Sam Bankman-Fried last night. I haven’t written anything thoughtful out about our conversation – I’m just sharing because I’m getting some questions about this. I’m still in holiday mode & am visiting family in SF atm, so please be patient.’ 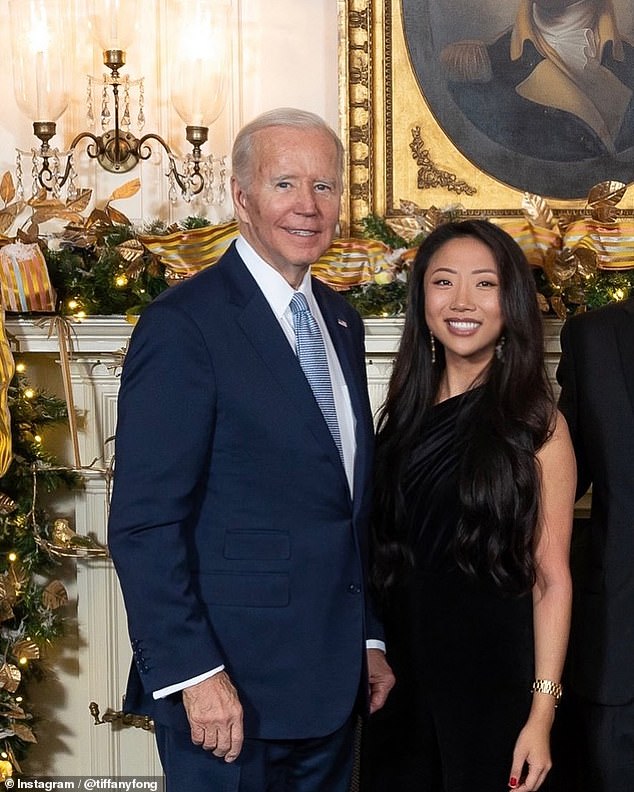 On December 18, Fong posted his picture at the White House’s Christmas party, she wrote in the caption: ‘I let POTUS smell my hair’ 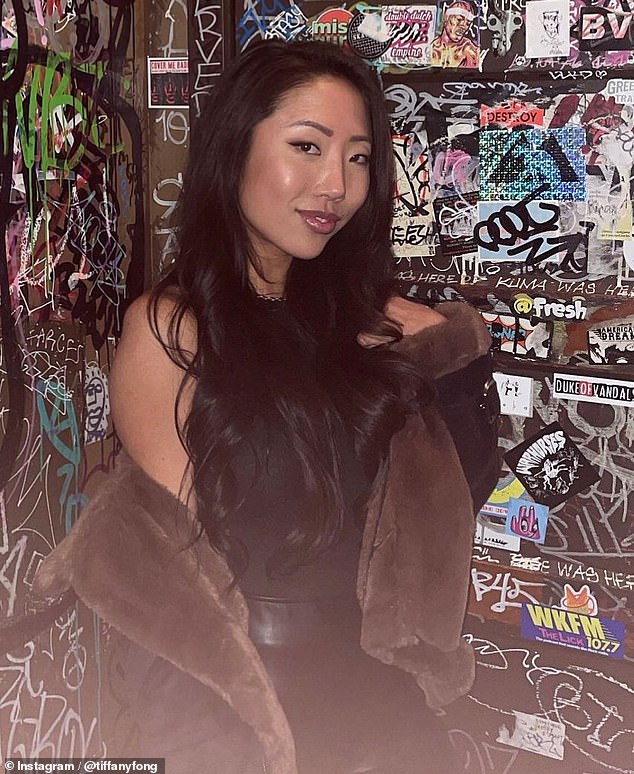 In November, Bankman-Fried made some of the most explosive revelations surrounding FTX to Fong.

Bankman-Fried said he thought ‘society’ had spent enough time speculating about the love life of him and his fellow executives living in the Albany resort.

‘We, as a society, have, in my opinion, in my humble opinion, have spent about enough time this week trying to figure out whether anyone living in Albany was polyamorous,’ Bankman-Fried said.

‘I feel like I’ve answered that question a lot, and the answer is too boring for people to, like, believe.’

Rumors of the sexual antics of Bankman-Fried and his coworker roommates in the Bahamas began to surface as FTX began to collapse.

According to a November report in CoinDesk, everybody living in the house was paired up with each other, or else used to be at some point.

Among them was Bankman-Fried’s ex-girlfriend, Caroline Ellison, the CEO of FTX’s sister company Alameda Research. 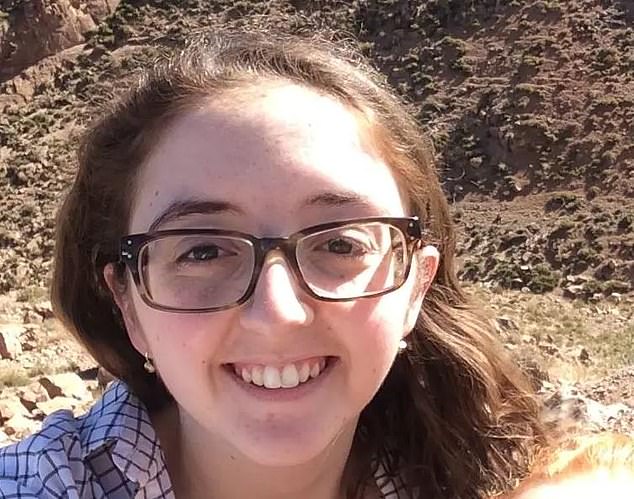 In her now-deleted Tumblr, Ellison wrote in 2020 under the handle Worldoptimization, ‘When I first started my foray into poly, I thought of it as a radical break from my trad past, but tbh I’ve come to decide the only acceptable style of poly is best characterized as something like “imperial Chinese harem”‘ 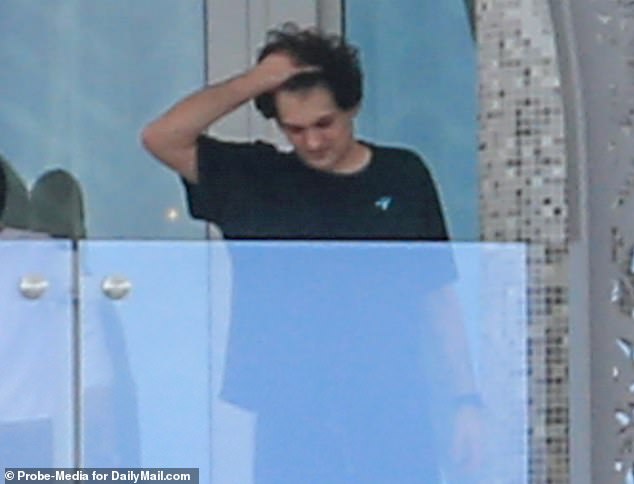 In a February Tumblr post she wrote about her ‘foray into poly’ and said that in a polyamorous relationship everyone should have a ‘ranking of their partners’ and ‘vicious power struggles for higher ranks.’

She said: ‘When I first started my foray into poly, I thought of it as a radical break from my trad past, but tbh I’ve come to decide the only acceptable style of poly is best characterized as something like “imperial Chinese harem.””

None of this non-hierarchical bulls***; everyone should have a ranking of their partners, people should know where they fall on the ranking, and there should be vicious power struggles for the higher ranks.’

As Bankman-Fried complained about media speculation about the romantic environment at FTX, former employees revealed the outrageous expenditures they enjoyed while there.

The Bahamas headquarters had food catered to it daily, and employees enjoyed ‘free groceries, barbershop pop-up and bi-weekly massages,’ a former employee told the Financial Times. In the US, workers were allowed $200 for DoorDash daily.

There was also a ‘full suite of cars and gas covered for all employees [and] unlimited, full expense covered trips to any office globally.’

Amazon does not deliver to the Bahamas, so FTX opted to hire private jets to bring in employee’s packages.

‘[It was] kids leading kids,’ a former employee said. ‘The entire operation was idiotically inefficient, but equally mesmerizing.’

‘I had never witnessed so much money in my life. I don’t think anybody had, including SBF.’

In response to reports that Bankman-Fried and his employees regularly partied hard with drugs or leaned heavily on amphetamines to work for hours on end, the former CEO said such things never occurred.

‘There were no wild parties.’ He told the New York Times on Wednesday. ‘At our parties we play board games. Twenty percent of people would have a quarter of a beer each and the rest of us would not drink anything.’

He said he had been prescribed certain medications to help him work.  ‘I think they help me focus a little bit,’ he said. 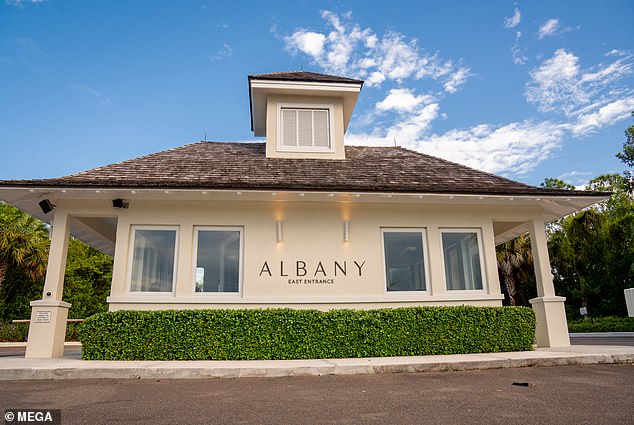 Albany, the Bahamas resort where Bankman-Fried set up the FTX headquarters 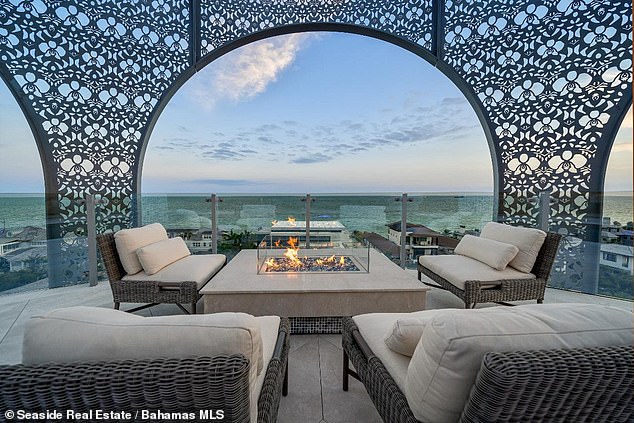 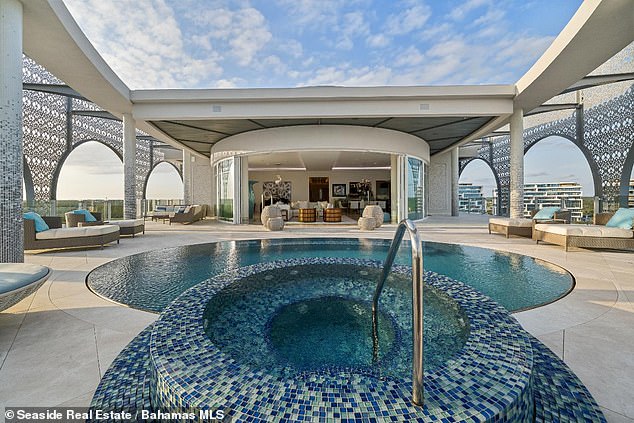 Bankman-Fried also told Fong that he didn’t know how to code and that he couldn’t have built a secret way to move money between his company and Alameda Research even if he wanted to.

Finally, the disgraced crypto trader told Fong that he donated to Republican politicians as well as Democrats.

He said: ‘All my Republican donations were dark but the reason was not for regulatory reasons, it was that reporters freak the f*** out when you donate to Republicans and I didn’t want to deal with that.’

Bankman-Fried will be arraigned three days into the new year at 2pm on January 3 before US District Judge Lewis Kaplan in Manhattan federal court.

Kaplan was given the case on Tuesday, after the original judge recused herself due to her husband’s law firm having advised FTX prior to its shocking collapse.

Bankman-Fried stands accused of engaging in a years-long ‘fraud of epic proportions,’ that he executed primarily by using customer deposits to support his Alameda Research trading firm, as well as to buy real estate and make record-setting political contributions.

Judge Kaplan is best known to have been the judge who is overseeing two civil lawsuits brought against former President Donald Trump by writer E. Jean Carroll claiming she was defamed when Trump denied raping her in Bergdorf Goodman nearly 30 years ago.

Kaplan, who has a reputation for being a no-nonsense jurist, also oversaw the case brought by Prince Andrew accuser Virginia Giuffre, who alleged the royal sexually abused her when she was 17 at the London residence of Ghislaine Maxwell.

Meanwhile, Bankman-Fried has brought on board top private investigator Jimmy Harkins, who formerly worked for Ghislaine Maxwell, among other high-profile individuals.

Prior to his December 12 arrest in the Bahamas, SBF acknowledged risk-management failures at FTX, but maintained that he does not believe he is criminally liable.

Two of his chief associates, former Alameda CEO Caroline Ellison and former FTX chief technology officer Gary Wang, have entered guilty pleas over their roles in FTX’s collapse and have agreed to cooperate with prosecutors.