It’s cold, dirty work to be digging around in a muddy pit in the middle of winter in Melbourne, but archeologist Liesel Gentilli’s eyes light up when she describes the treasures she’s unearthed on Bennetts Lane.

“Oh, it’s a really, really awesome job,” she beams. “I’ve found a Mahjong tile and a 17th century Chinese coin. Bottles are always fun [to find] and the toys are always awesome. I’ve found bits of dolls and marbles and a little wooden die that was still complete.” 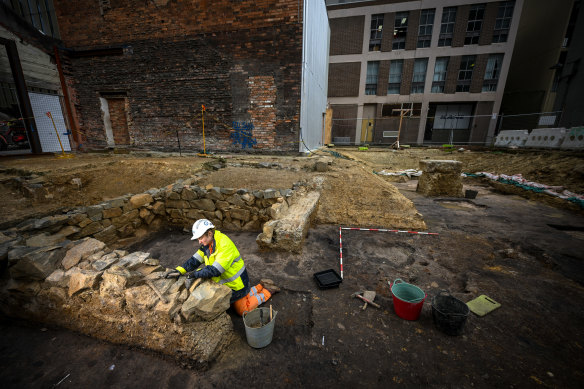 Gentilli is one of about 25 archaeologists, from heritage firm Extent Heritage, who have worked five days a week for the last three months to excavate around 1000 cubic metres of soil from Bennetts Lane; in the process revealing one of the best preserved “buried blocks” in Melbourne.

This unassuming site, nearby the since-closed Bennetts Lane Jazz Club, is now an open-cut pit revealing layers of archaeological remnants from pre-contact Aboriginal times, as well as artefacts from the lives of the modest Melburnians who lived in what were considered slums until the early 20th century.

‘Melbourne’s buried blocks’ are a phenomenon first discovered five years ago, when a subterranean neighbourhood the size of five tennis courts was stumbled upon during the development of land around Lonsdale Street’s Wesley Church.

A subsequent Heritage Victoria investigation found that in the 1850s, the City of Melbourne, fed up with the frequent flooding of what was known as the ‘Lonsdale Swamp’, ordered that all properties in the vicinity be demolished and buried to raise the street level by two metres. 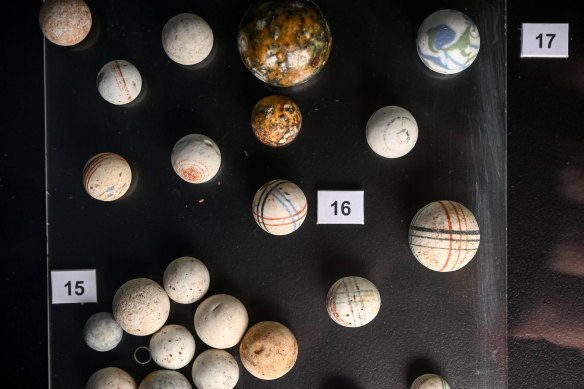 Children’s marbles that were excavated from the site.Credit:Eddie Jim

When developers, Perri Projects and Pellicano, bought the site to build a 20-level office building in 2017, Heritage Victoria required the developers undertake an archeological dig before construction.

Specialists who have worked on the site for the past six months said they knew it was likely something was underneath old concrete slabs, but had no idea how well remnants would be preserved in what’s been dubbed the “Melbourne Pompeii effect”.

“This is totally unexpected and out of the blue,” said University of Melbourne historian, Professor Andrew May.

“Look around, we’re in a modern 21st century metropolis here, so to actually still be finding these sorts of blocks that can tell us things about the history of Melbourne – early settlement, the landscape – that we didn’t know before is extraordinary.”

Visitors to the site can see the remnants of two bluestone pre-gold rush era cottages built in the 1840s, complete with cesspits and backyards where cows and chickens were raised and vegetables were grown.

Both cottages have two almost perfectly preserved red brick fireplaces. Beyond the homes, thousands of artefacts have been found including belt buckles, bottles, cosmetics, pipes, toys, dishes and animal bones. 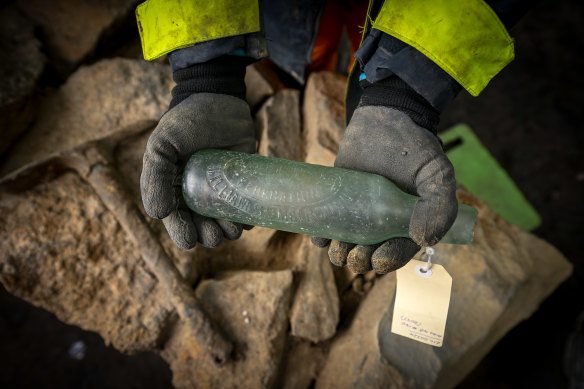 A large number of bottles were found buried in the site.Credit:Eddie Jim

After the original cottages were demolished and filled in at the order of the council, tenement blocks sprang up on the site in the 1850s and became home to some of the city’s poorest residents, as well as artisans such as a Chinese cabinetmaker, whose possessions have also been unearthed.

By 1913, most of the buildings except one on the site were demolished after being condemned as ‘slums’. They were eventually replaced by warehouses and workshops, which remained until a few years ago when the demolition for the new Bennetts Lane office building began.

“Probably it was migrant populations that may have come in during the gold rush, and then found themselves in other occupations within the growing city of Melbourne as the rush calmed down,” said Ian Travers, the chief of Extent Heritage, which undertook the excavation on behalf of the developers. 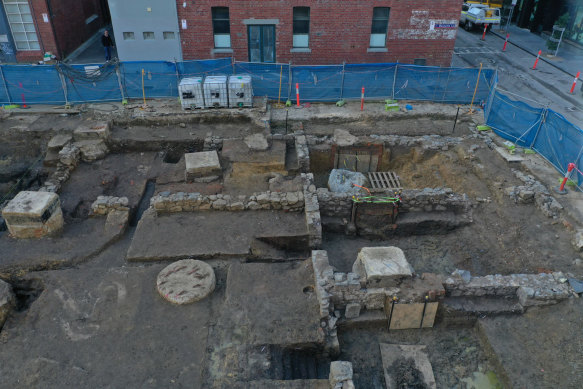 An aerial image of the dig site.Credit:Extent Heritage

“The socio-economic state of this part of the city [is] probably one of the reasons that we’ve got such good preservation of archaeology because there wasn’t much development pressure.”

The public only has about another month to walk past and see the site while the excavation is being completed, before all artefacts are ripped up and put in storage to make way for the several basements of the new office tower.

Some of the bluestone and timber found will be showcased on the ground floor of the new building, but the rest will be stored with Heritage Victoria, which has floated the possibility of recreating a cottage elsewhere. 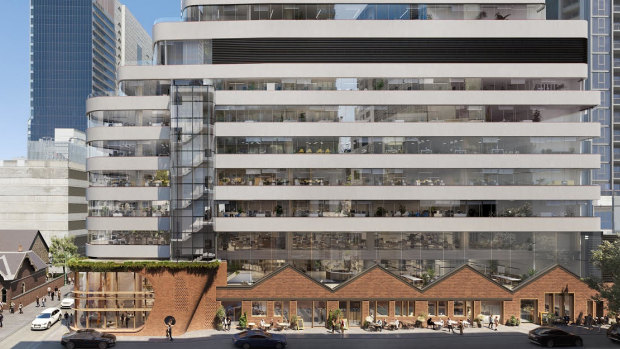 A render image of the Bennetts Lane development, a 20-floor, 12,000sqm office building on the corner of Little Lonsdale and Bennetts Lane.Credit:Perri Projects & Pellicano

Heritage Victoria principal archeologist, Jeremy Smith, said the discoveries came too late to put a heritage protection to save the site as a dig – or require it to be preserved under glass in the foyer of the new building. But he said he hoped other “buried blocks” in the future could be physically preserved in some way.

“It’s challenging but it’s not impossible,” he said.

Free public tours of the site and a pop-up artefact display will be open to the public on August 6 and 13. Bookings can be made here.