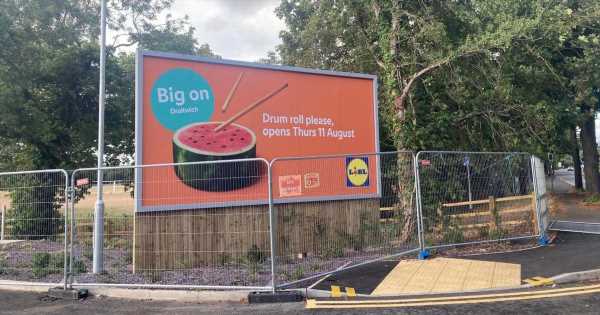 Lidl have been caught out by an embarrassing blunder when a 20ft billboard welcomed customers to a new store – in the wrong town.

The new Worcester store is set to be unveiled by the bargain supermarket chain next Thursday (11/8).

But shoppers were left confused by the huge billboard outside the entrance which boasted how the company was “Big on Droitwich” – a town 10 miles away.

READ MORE: Lidl gets slap on wrist from advertising watchdog over its claims about Aldi prices

The error is believed to have happened because the supermarket has been built on Droitwich Road in Worcester.

Shoppers took to social media to point out the mix-up, with some suggesting Lidl bosses should “buy a map”.

Writing on Facebook, Caroline Dixon wrote: “Nothing like getting to know your new customer base! Buy a map Lidl or at least Google where your own shop is!”

Rob Guest joked: “Is it because the good people of Worcester would go mad if anything other than a Burger King was built in Worcester? So they’ve pretended it’s in Droitwich?”

There are two other Lidl supermarkets in Worcester, the company having already opened stores in Blackpole and Newtown Road in the city.

Lidl also has a store on Kidderminster Road in Droitwich.

A spokesperson for Lidl confirmed that the error had indeed been from the store being on Droitwich Rd, rather than it being mistaken for the wrong town, and is in the process of being changed.

“We’re definitely Big On being local, but it appears we’ve been a bit too specific here,” added the spokesperson.