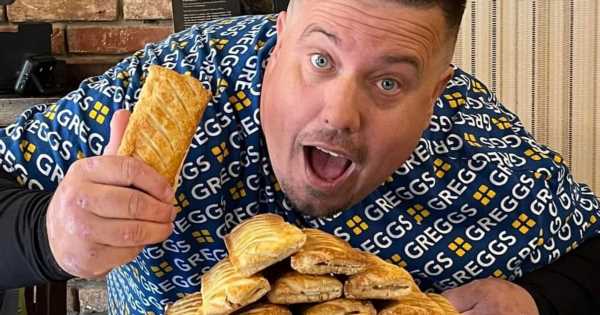 A Greggs mega-fan got a tattoo of a ripped sausage roll man in celebration after "breaking" the world record when he scoffed 21 of the snacks in just 30 minutes.

However, John Dawes from Teesside has a nervous wait on his hands as Guinness Book of World Records officials are still reviewing footage of the competitive eater's attempt to see if he truly deserves the crown.

Either way, 21 meat-filled pastries is an impressive attempt, and John – an Amazon delivery driver – expects to take the title.

The 43-year-old – who visits Greggs every morning for a latte and sausage roll – scoffed more than five pounds of sausage meat and had nearly 7,000 calories in meat and flaky pastry.

He marked the attempt to eat 48 of them by getting a tattoo of a caricature sausage roll man ripping off his pastry shirt to reveal a muscular body.

"I celebrated by getting a tattoo at Skins and Needles in Middlesbrough, dedicated to my love for Greggs sausage rolls and hopefully, my new record for sausage roll eating!” he said.

Speaking about his love for sausage rolls, he said they reminded him of his childhood swimming classes.

"I've always loved sausage rolls, after swimming as a kid I always used to have one with tomato sauce and they just remind me of my childhood," he said.

To stay up to date with all the latest news, make sure you sign up to one of our newsletters here .

"So doing a sausage roll challenge has been on my radar since I started competitive eating.

"I'm a huge fan of Greggs and have been going as long as I can remember, I even started buying sausage rolls and steak bakes in bulk because I just loved eating them so much.

"The challenge got difficult after number 17 when I started to feel a bit stuffed.

“I actually scolded my mouth on the first one which kind of helped me push through the first lot as the heat didn't affect me after that."

John’s still awaiting official confirmation from Guinness World Records, which is reviewing his footage of the attempt.