Artist took own life after drinking hallucinogenic 'tea' in ritual 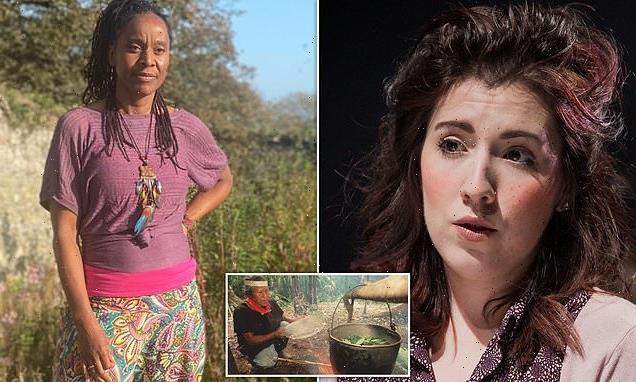 A coroner has warned of the potentially deadly consequences of trendy shamanic ‘healing’ rituals after hearing how a young artist suffered a mental breakdown and took her own life.

Kate Hyatt, 32, attended a £620-a-head retreat at a Tudor farmhouse in rural Worcestershire where she drank a hallucinogenic plant-based ‘tea’ used in South American rituals, an inquest heard.

Championed by celebrities such as Sting and Lindsay Lohan, ceremonies revolving around psychoactive potions are claimed to broaden participants’ consciousness and tackle negative feelings.

Miss Hyatt had to leave a masters course for which she was studying in San Francisco when coronavirus struck California and returned to live with her parents in Yorkshire and began exploring alternative medicine. 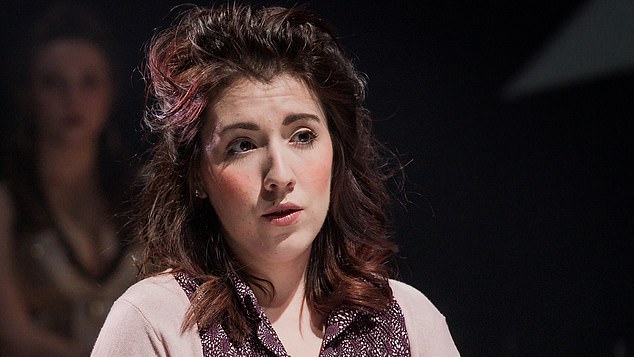 Kate Hyatt, pictured, took her own life after taking part in shamanic healing ritual on a three-day retreat in Worcestershire 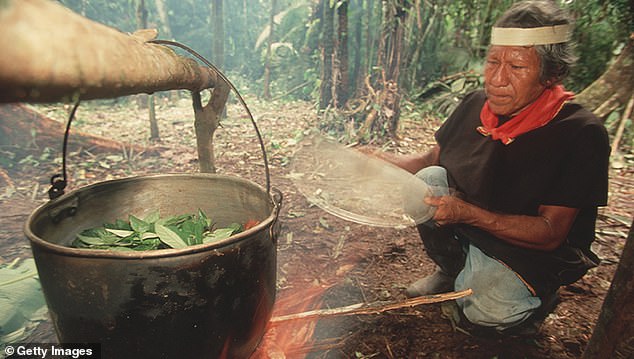 An inquest heard Miss Hyatt’s family believe she took ayahuasca, a class A drug, during the retreat. Pictured: A shaman in Ecuador boils leaves for their psychoactive properties used in ayahuasca

In June 2021 she attended a three-night retreat near Malvern after being put in contact with the organisers by a registered midwife, the inquest heard.

According to emails sent to Miss Hyatt and seen by the Daily Mail, the retreat was to feature wachuma, described as a ‘teacher plant’ allowing participants to ‘dive deeply into ourselves’.

As well as wachuma, which is made from a ‘sacred’ cactus and contains illegal hallucinogenic mescaline, Miss Hyatt’s parents told the inquest they believe she also ingested ayahuasca – another Class A drug – at the retreat.

On her return to the fashionable arts town of Hebden Bridge in West Yorkshire, her mental health deteriorated and she became convinced she was dying.

Miss Hyatt pleaded with organisers of the retreat for help, saying she was scared and ‘losing my grip’.

Despite a referral by doctors to a mental health crisis team, she attempted suicide on one occasion, before taking her life in October 2021.

Now Bradford assistant coroner Crispin Oliver has written a ‘prevention of future deaths’ report, saying there is a risk of other participants on courses organised by the ‘Hands of Light Academy’ dying due to a lack of medical supervision. 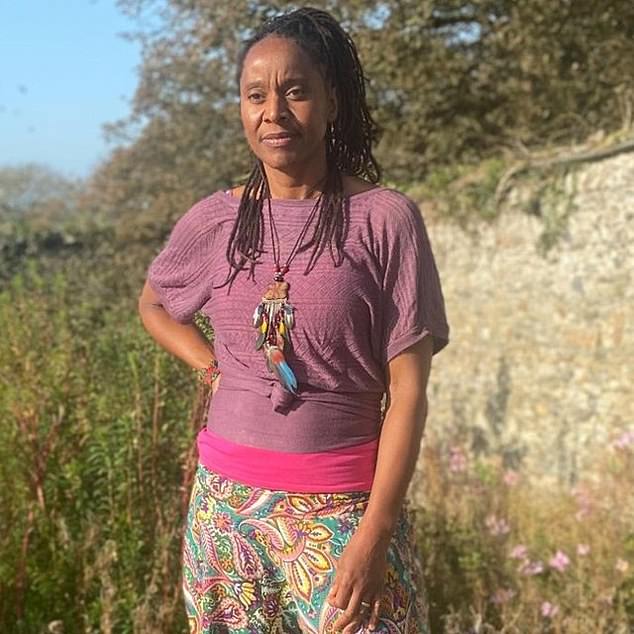 Marianne Willis, pictured, who founded the academy denied that Miss Hyatt had attended a course it organised

Marianne Willis, who founded the academy with her husband Clive, responded to the coroner by denying Miss Hyatt attended a course it organised or that it dispenses illegal psychedelics.

However, Mr Oliver has concluded that the evidence he heard to the contrary is ‘credible’.

‘These are not innocent drugs– they need to be used in the context of carefully controlled trials,’ said her father Ray, a retired hospital consultant.

‘The kind of advice she got from the organisers of the retreat when she realised she was deteriorating was useless, frankly.

‘We wouldn’t want anybody else’s health to deteriorate in the way that Kate did.’

The family – who are keen to stress that Miss Hyatt took the substances for medicinal rather than recreational reasons – have also lodged a formal complaint with the Nursing and Midwifery Council about the midwife’s alleged role.

In 2019 she began an MA in fine arts at San Francisco Arts Institute, but after Covid struck the following year, foreign students were advised to return home.

For thousands of years before the arrival of European explorers, native American tribes harnessed the psychoactive properties of plants for magic and ritual.

Since the 1960s hippy trail reached South America, Western visitors have been tempted to ‘broaden their consciousness’ by consuming hallucinogenic drinks mixed by local shamen – traditional healers and spiritual guides.

While substances such as ayahuasca are illegal to possess or supply in the UK, overseas retreats where people can sample them are widely promoted online, and many users have reported trying them in this country as well.

Actress Lindsay Lohan credited drinking ayahuasca – which is created by pounding vine stems in boiling water – with helping to free her from ‘the wreckage of my past’.

Musician Sting is also a proponent, saying ayahuasca had convinced him a ‘higher intelligence’ was at work.

Users experience hours of illusions and flashbacks. It is illegal in the UK as it contains the Class A drug DMT.

There are reports that tourists in South America have been robbed after being drugged by bogus shamen.

After the death of backpacker Henry Miller, 19, from Bristol, who paid £13 to try ayahuasca during his gap year trip to Colombia in 2014, a coroner warned against taking part in such rituals.

The cacti are legal to own – but only if not intended for human consumption.

By this time, she was suffering from fatigue and low mood – symptoms of undiagnosed long Covid, her family now believe – and began exploring alternative medicine.

An email inviting her to the summer solstice retreat shows participants were told it would boost their ‘cosmic duty’ and ‘collective vibration’.

It was signed by ‘Kerryn’ and ‘Marianne’ – believed to be retreat host Kerryn Coetzee and Marianne Willis.

The ‘crew’ were experienced in ‘shamanic practice’ and ‘Peruvian healing techniques’.

Miss Hyatt filled it in, saying she suffered from post-traumatic stress disorder, chronic fatigue syndrome and a ‘phantom illness’.

While she never told her parents exactly what she took at the retreat, one message she sent says she had ayahuasca in June 2021.

After her death they also discovered her internet history shows that she searched for ‘Can ayahuasca cause psychosis?’ at the end of August.

In September she sent Mrs Willis an anguished message saying ‘my nervous system is on fire as well as my brain’.

One of her responses reads: ‘Angels surround and bless you.’ Mrs Willis added that she hoped Miss Hyatt was ‘finding you way home to yourself’.

In response to a voice message from Miss Hyatt saying she felt like she was dying, a woman called ‘Kes’ – believed to be Miss Coetzee – informed her that she was experiencing a ‘shamanic death process’.

Saying she and Mrs Willis were too busy to speak by phone, ‘Kes’ added that ‘parts of you are dying’ but her ‘essence’ was ‘stronger than ever’.

After Miss Hyatt told ‘Kes’ she would value someone who ‘really hears me’, she replied apologising that ‘things have been hectic’.

No one from the retreat ever shared concerns with her family and Miss Hyatt took her own life on October 31.

At an inquest last November, the coroner Mr Oliver said she had begun suffering ‘delusional anxieties’ after ‘exposure to unregulated plant-based drugs’.

He wrote a prevention of future deaths report expressing concern that ‘hallucinogenic substances are being dispensed by the Hands of Light Academy’ to people who may have mental health problems ‘without proper, or any, consideration of the impact that they may have on them’.

In her response to the coroner, Mrs Willis denied Miss Hyatt had attended a Hands of Light Academy course or that it dispensed wachuma.

She added that ‘students’ were ‘screened’ in advance for mental health issues but promised to ‘educate’ staff about ‘hallucinogens and their potential dangers’.

In turn, the coroner said he remained ‘satisfied’ that the evidence that Miss Hyatt attended the Hands of Light Academy and was exposed to wachuma there was ‘credible’.

The website for Hands of Light Academy was taken down after the coroner’s report and it does not appear to have a physical base.

However, it has previously claimed to be ‘one of the UK’s top energy training schools’ as part of a mission to ‘create a new paradigm’.

When the Daily Mail visited the farmhouse at the location Miss Hyatt was given for the retreat, a reporter was told that Miss Coetzee lived there and that she was known as ‘Kez’.

Approached by the Daily Mail, Miss Coetzee said she had been ‘deeply saddened to hear of Kit’s tragic passing’.

She reiterated that Miss Hyatt had never done an ‘energy healing’ course at the Hands of Light Academy but did not deny that she took part in a ‘gathering’ she helped organise.

Miss Coetzee insisted none of the ceremonies held at the ‘gatherings’ were ‘contraindicated’ to the medical conditions Miss Hyatt cited when completing the questionnaire.

She added that Touched Heart Healing had subsequently closed down but she was ‘unable to comment further, due to confidentiality and to minimise further pain and suffering to Kit’s family’.

If you are affected by any of the issues raised by this article, you can call the Samaritans anonymously for free on 116 123, or go online at samaritans.org.