POLL: Has Liz Truss gone up in your estimation after speech?

Liz Truss vows to 'face down separatists' as she defends union

Wednesday saw Liz Truss march out to M People’s Moving on Up to give her speech at the Conservative Party conference held in Birmingham. The new Prime Minister addressed her “friends” and said she said she was determined to ensure Britain weathered “these stormy days”. While the new Prime Minister was referring to the pandemic and the war in Ukraine, her first month in power has seen her face a metaphorical storm after Chancellor Kwasi Kwarteng’s budget rattled the economy and saw the pound tumble amid the already-worrying cost of living crisis. So has Liz Truss gone up in your estimation after her Tory Party Conference speech? Vote in our poll.

Less than a fortnight ago on September 23, Kwarteng announced the mini-budget which was, according to critics – some of which were in the Tory Party itself – a cataclysmic failure.

The £45billion tax cut package was the biggest seen in half a century, as it promised to reduce the top 45 percent rate of income tax, national insurance, and stamp duty. This then lead to what Kwarteng described as a “little turbulence”: Government borrowing costs surged, the Bank of England stepped in to rescue pension funds and the pound fell to a record low against the American dollar.

A former Government minister told Sky News that some MPs had sent letters of no confidence to the 1922 Committee chairman Sir Graham Brady in the days after the mini-budget.

Truss and Kwarteng then made a U-turn, reversing plans to abolish the 45 percent income tax rate for top earners as it had become a “huge distraction” from the rest of the package.

However, Home Secretary Suella Braverman hit out at those colleagues who opposed the 45 percent income tax rate, upping the ante by describing them as “staging a coup”. Speaking on a Telegraph podcast at the conference, she said: “Ultimately I am very disappointed that members of our own parliamentary party staged a coup effectively and undermined the authority of our prime minister in an unprofessional way.”

It was reported on Wednesday that the average two-year mortgage rate is at its highest in 14 years with the typical deal having a rate of more than 6 percent. This has not been seen since the financial crash of 2008. 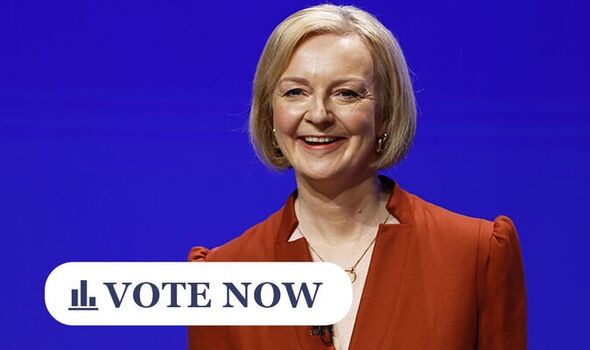 Some Tory MPs – particularly those in red wall seats – are losing trust in the new Prime Minister as support for Labour in the polls has skyrocketed following the mini-budget with some reportedly fearing the next general election is lost already.

In the days after the mini-budget, YouGov reported Labour as having a 33-point lead over the Conservatives, the largest lead held by a party since the late Ninties. On Wednesday, the day of Truss’ speech, Labour still had its strongest performance in the polls in two decades with the Conservatives’ average poll rating dropping to 24 percent, according to PA News agency data.

The fallout from the mini-budget and the rumbling of discontented Tory MPs has been the backdrop of Truss’ first Conservative Party Conference as leader.

At one point, it appears the Prime Minister made reference to the discontented voices in her party as she told the crowd: “I know how it feels to have your potential diminished by those who think they know better.”

In her speech – which lasted around 35 minutes, markedly shorter than the usual speeches given by a leader at a conference – Truss held firm, telling the audience that she would battle the “anti-growth coalition” and “enemies of enterprise”.

Not only this, but Truss vowed to take on militant unions and environmental campaigners, like Greenpeace who had interrupted her speech by shouting and holding a sign which read “who voted for this”.

Prior to her speech, she told SkyNews that she had “absolutely no shame” in the U-turn. However, she told those at the conference on Wednesday that cutting taxes was “the right thing to do morally and economically”.

Although the Government’s 45p tax rate U-turn was described as “humiliating” by Liberal Democrat leader Sir Ed Davey, Truss promised on Wednesday to “keep an iron grip on the nation’s finances”.

So what do you think? Vote in our poll and join the debate in the comments section below.