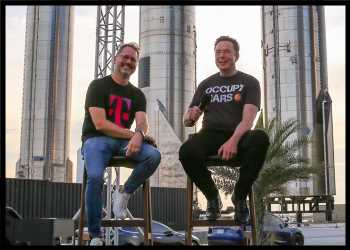 Telecom major T-Mobile US Inc. and Elon Musk’s SpaceX have signed a deal to provide cell phone connectivity by linking Starlink satellites to mobile phones with a view to provide universal coverage.

Musk joined with T-Mobile CEO and President Mike Sievert in a live event to announce “Coverage Above and Beyond”, the companies’ breakthrough new plan to bring connectivity everywhere.

Under the deal, Starlink and T-Mobile’s wireless network, the Un-carrier, would provide near complete coverage in most places in the U.S. The service will be available to most remote locations previously unreachable by traditional cell signals.

For the satellite-to-cellular service, the companies will create a new network, broadcast from Starlink’s satellites using T-Mobile’s mid-band spectrum nationwide.

Customers need not buy any extra equipment. The smartphones already on T-Mobile’s network will be compatible with the new service using the device’s existing radio.

Initially, text messaging, including SMS, MMS and participating messaging apps, will be available. Afterwards, the companies plan to pursue the addition of voice and data coverage.

According to the companies, more than half a million square miles of the U.S. as well as vast stretches of ocean are untouched by cell signals from any service providers at present, despite powerful LTE and 5G wireless networks.

These mobile dead zones are difficult to cover with traditional terrestrial cellular technology. People in those areas are either disconnected or pay exorbitant rates to use a sat phone.

SpaceX Chief Engineer Musk stated that with the deal, there are no dead zones anywhere in the world for one’s cell phone.

With a view to expanding Coverage Above and Beyond worldwide, the CEOs issued an open invitation to the world’s carriers to collaborate for global connectivity. T-Mobile would provide reciprocal roaming to those providers working with them.

Earlier this year, the Un-carrier had given customers enhanced connectivity beyond the reach of its network – in the air and abroad.