A wild dog tightly grasped in the jaws of a lioness shocked safari visitors by fleeing its captor after playing dead.

The dramatic moment was captured on a game drive in Hwange National Park in Zimbabwe.

The group from African Bush Camps were being led by tour guide Calvet, 49, when they came across the pack of wild dogs.

The dogs had just finished eating a kudu, a type of antelope, when the lioness appeared.

An unlucky dog could not escape the hungry lioness and was soon clutched in its jaws.

The predator walked around holding on to the dog which by now appeared to be dead with its legs hanging limp.

But all of a sudden, the lioness sees more potential prey as another wild dog comes near the big cat. 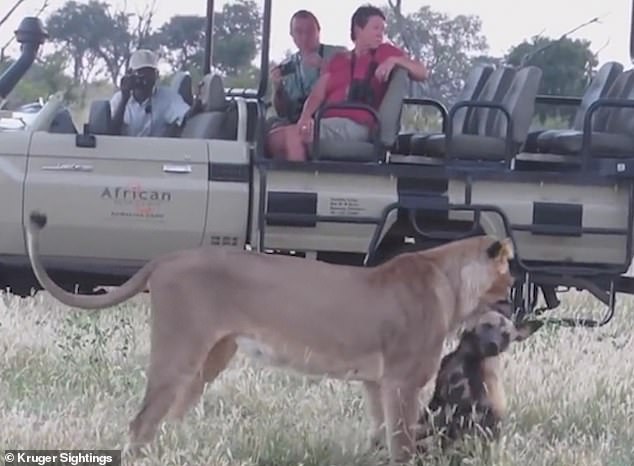 Onlookers from African Bush Camps had seen the lioness catch the dog after a pack of them had finished eating a kudu, a type of antelope 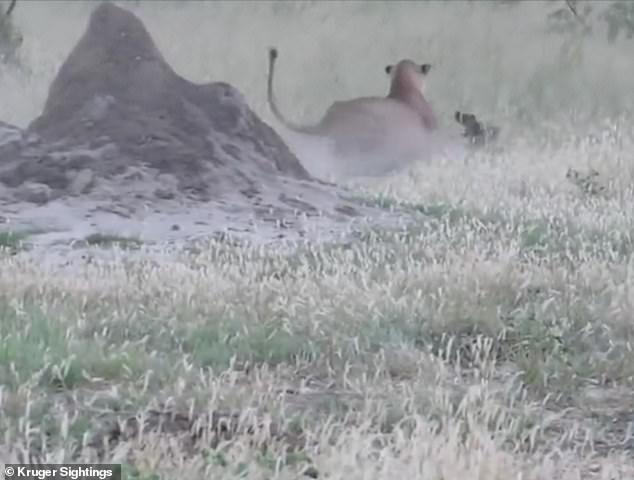 The lioness runs off to catch more prey as the wild dog suddenly rises unexpectedly to cries of, ‘Oh my God, he’s alive’ from the onlookers

The lioness drops the first dog and chases after the new one which manages to escape the fast beast.

Then in a dramatic twist, the dog that was presumed dead suddenly rises and starts to flee.

After staring back at the lioness it then makes its way back into the bushes triumphant.