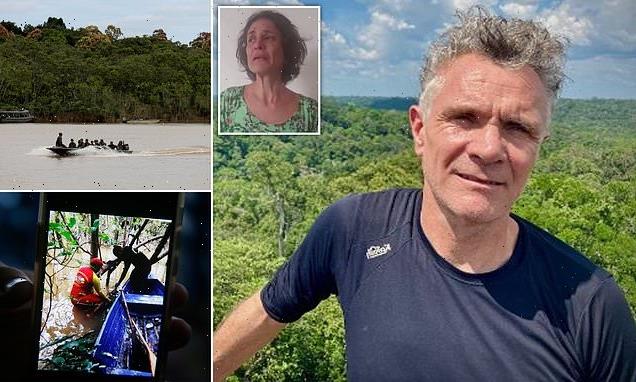 Two bodies have been found in the search for missing British journalist Dom Phillips and his guide Bruno Pereira more than a week after their disappearance in the Amazon.

The Phillips family have been told of the discovery by the Brazilian ambassador to the UK, although police have not yet formally announced the news.

The Guardian journalist, 57, vanished in a remote part of the rainforest prowled by illegal loggers, miners and drug gangs on June 5 while travelling on a trip with indigenous expert Pereira.

Mr Phillips’ brother-in-law Paul Sherwood told The Guardian: ‘He said he wanted us to know that… they had found two bodies.

‘He didn’t describe the location and just said it was in the rainforest and he said they were tied to a tree and they hadn’t been identified yet.’

‘He said that when it was light, or when it was possible they would do an identification.’

Respected Brazilian journalist André Trigueiro, who works for Globo, said: ‘Alessandra, wife of Dom Phillips, has just informed me that the bodies of her husband and indigenist Bruno Pereira have been found.’

Trigueiro added: ‘Alessandra made contact again saying that she had just received a call from the PF informing that the bodies need to be examined.

‘The British Embassy had already communicated to Dom Phillips’ brothers that they were the bodies of the journalist and the indigenist. Now everyone is waiting for the expertise.’

It comes after boots and a backpack belonging to Mr Phillips were discovered by the search team. 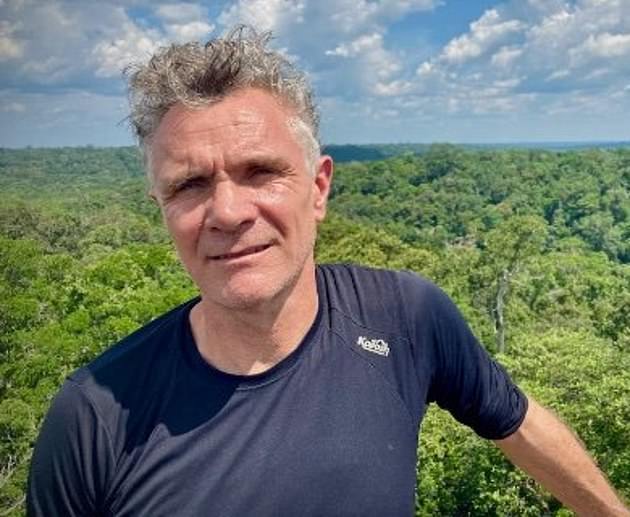 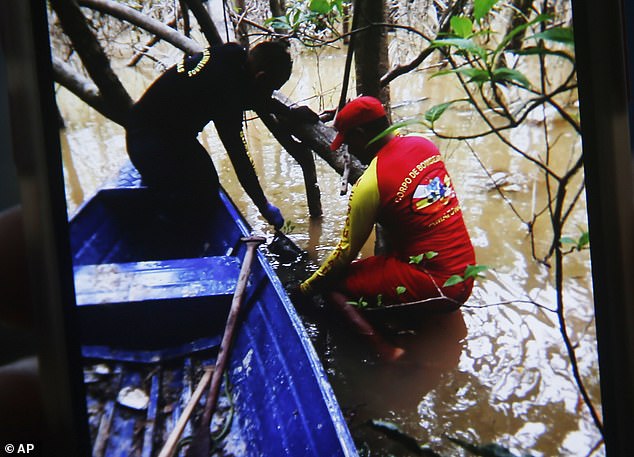 Fire crews helping search for the two men on Sunday uncovered a backpack, laptop and boots belonging to Mr Phillips tied to a half-sunken log (pictured, the moment the pack is found) 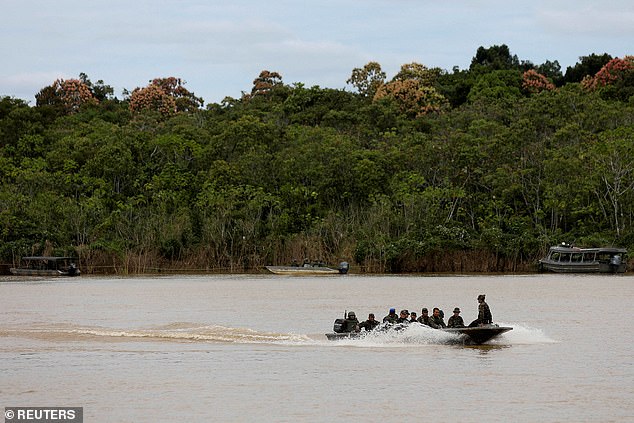 Yesterday, authorities uncovered the backpack containing his boots, clothes and a laptop tied to a half-sunken log in the area where the two men went missing.

A health ID card and boots belonging to Mr Pereira were also uncovered.

Maria Sampaio, Mr Phillips’ mother-in-law, said after the discovery she believed the two men ‘are no longer with us’ and had ‘given their lives in defence of the rainforest.’

Alessandra Sampaio, Mr Phillips’ wife who had earlier made a tearful appeal for her husband’s return, reposted the sentiment and said she agreed.

‘They are no longer with us,’ Maria wrote on Instagram. ‘Mother nature has snatched them away with a grateful embrace.

‘The material has been undone and incorporated into the earth they so loved and respected.

‘Their souls have joined those of so many others who gave their lives in defence of the rainforest and Indigenous peoples.

‘Today they form part of an immense and pulsating vital energy that emanates from this immense greenery that is the heart of Brazil.’

A suspect – 41-year-old Amarildo da Costa de Oliveira – was arrested after finding traces of blood on his fishing boat along with illegal ammunition. 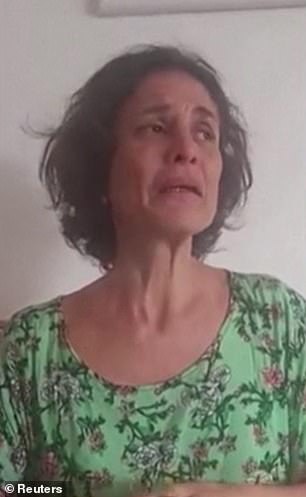 Alessandra Sampaio, Mr Phillips’ wife, said bodies have been found in the Amazon

Samples of the blood are on their way from the western Vale do Javri region of the Amazon, a vast area the size of Ireland and Wales combined, to government laboratories in the jungle capital of Manaus for analysis.

In the meantime, a judge has granted police permission to continue holding Mr Oliveira – known as ‘Pelado’ – for further questioning.

He has pleaded innocence, saying he is a fisherman and the ammunition he was carrying was used for his trade.

Earlier, Elizeu Mayaruna, who works for indigenous agency Funai, told Reuters that, while searching the forest along the Itacoai river on Saturday, he found clothes, a tarp and a bottle of motor oil.

Mayaruna and two other members of an indigenous search team acquainted with Pereira, a former Funai official, said they recognised a shirt and pants that belonged to him.

Witnesses said they saw Pereira and Phillips, a freelance reporter who has written for the Guardian and the Washington Post, travelling down that river last Sunday.

The two men were on a reporting trip in the remote jungle area near the border with Peru and Colombia that is home to the world’s largest number of uncontacted indigenous people.

The wild and lawless region has lured cocaine-smuggling gangs, along with illegal loggers, miners and hunters.

Reuters witnesses saw the stretch of riverbank were Mayaruna discovered the clothing cordoned off by police on Sunday morning as investigators scoured the area, with a half dozen boats ferrying police, soldiers and firefighters back and forth. 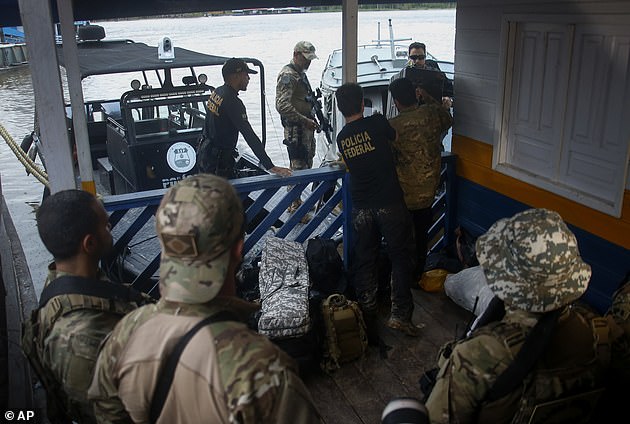 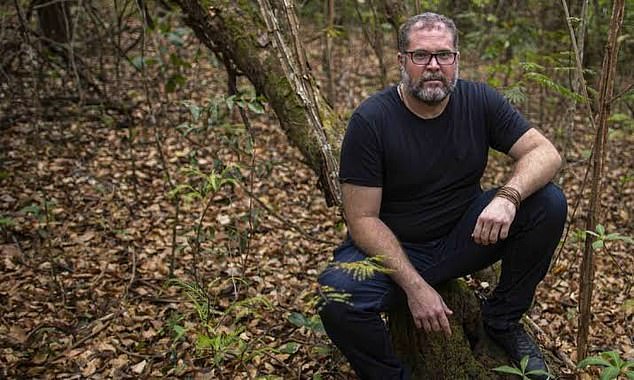 Bruno Araújo Pereira, an expert on the indigenous peoples of the Amazon, also went missing with his health ID card and clothes found alongside Mr Phillips’ backpack 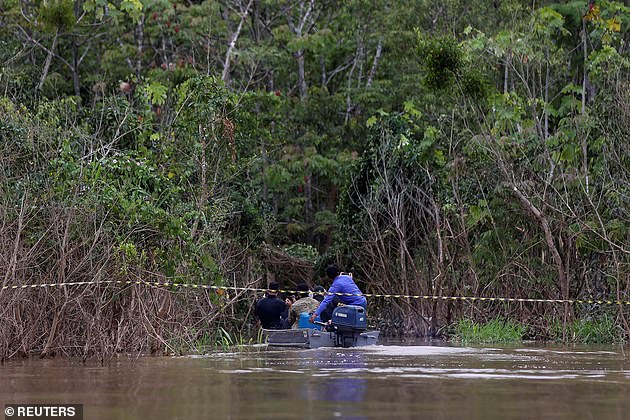 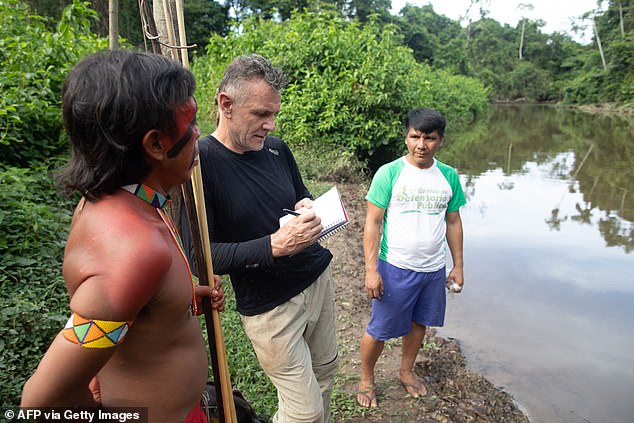 Phillips talks to two indigenous men while visiting a community in Roraima, Brazil, on November 16, 2019

Bolsonaro, who last year faced tough questioning from Phillips at news conferences about weakening environmental law enforcement in Brazil, said last week that the two men ‘were on an adventure that is not recommended’ and suggested that they could have been executed.

State police detectives involved in the investigation have told Reuters they are focusing on poachers and illegal fisherman in the area, who clashed often with Pereira as he organised indigenous patrols of the local reservation.

Some 150 soldiers had been deployed via riverboats to hunt for the missing men and interview locals, joining indigenous search teams who have been looking for the pair for a week. 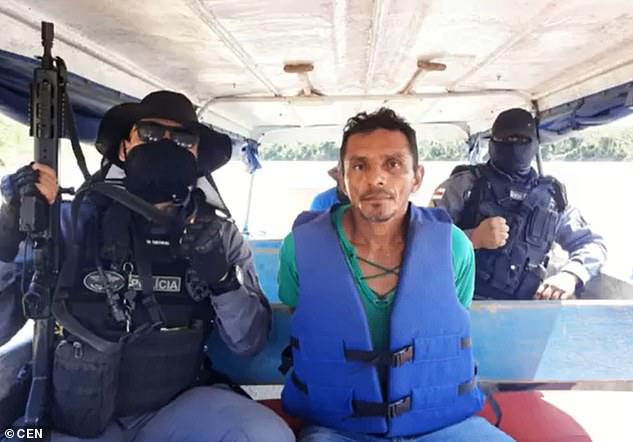 Amariledo ‘Pelado’ da Costa was taken into custody by authorities in Amazonas, Brazil. His family claim he has been waterboarded by police in an effort to extract a confession 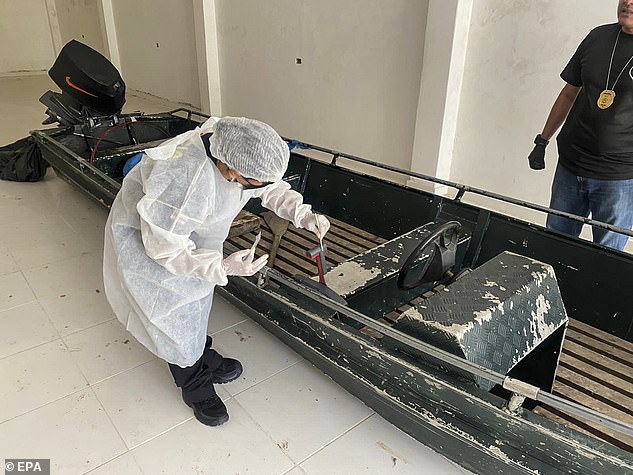 A forensics worker analyzes the boat that was seized from a fisherman identified as Amariledo ‘Pelado’ da Costa, who was taken into custody Tuesday and was charged with illegal possession of drugs and restricted ammunition 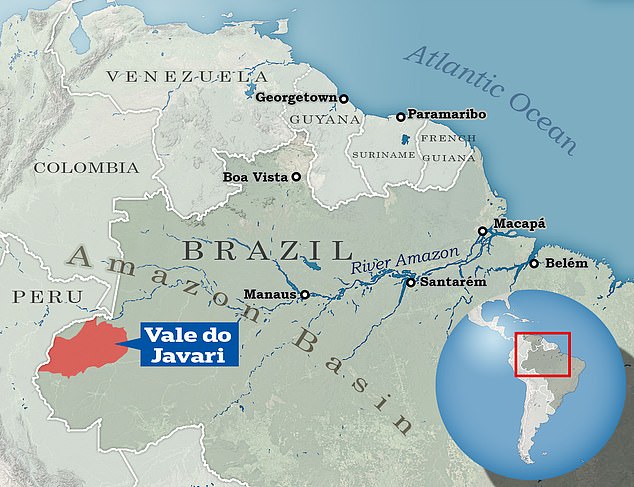 The Javari region is an area notorious for illegal mining and drug trafficking, and the pair had reportedly faced threats before their disappearance