A World Health Organization trial using four drugs including the antiviral remdesivir in the hospital treatment of COVID-19 has found the repurposed medicines have little to no effect on the length of time patients spend in hospital or their survival.

“These Remdesivir, Hydroxychloroquine, Lopinavir and Interferon regimens appeared to have little or no effect on hospitalized COVID-19, as indicated by overall mortality, initiation of ventilation and duration of hospital stay,” the researchers wrote in a preprint on the findings of the WHO’s Solidarity trial that was released on medRxiv.

The results have to yet to be peer-reviewed.

Remdesivir, developed for Ebola by US pharmaceutical company Gilead Sciences, was one of the earliest treatments put forward for COVID-19 and was taken by US President Donald Trump when he was admitted to hospital with the disease at the beginning of the month. Trump has also touted the use of hydroxychloroquine, as has Brazil’s President Jair Bolsonaro.

“It’s certainly disappointing,” Julie Fischer, an associate research professor in the Department of Microbiology and Immunology at Georgetown University told Al Jazeera. “What all of us would like to see is what is frequently called a ‘magic bullet’; a drug that’s already in existence, that is safe and works effectively in patients. Unfortunately, in this case, this trial at least suggests the benefits of remdesivir weren’t there at all.” 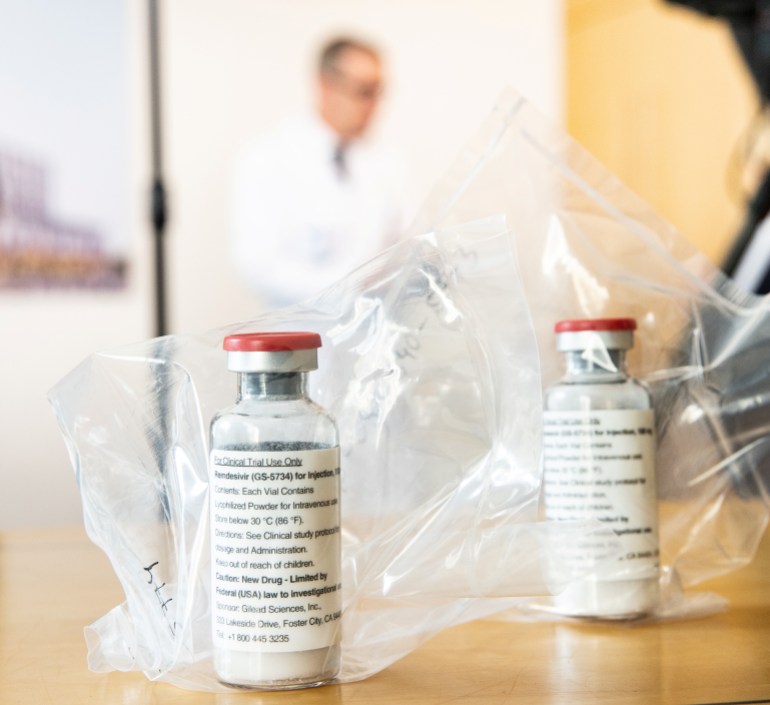 Two ampules of remdesivir, which was developed to treat Ebola [File: Ulrich Perrey/Pool via Reuters]The randomised trial of the drugs took place in 405 hospitals across 30 countries and involved 11,266 patients. Some 2,750 people were allocated remdesivir, 954 hydroxychloroquine, 1,411 lopinavir, 651 interferon plus lopinavir, 1,412 only interferon, and 4,088 were given none of the study drugs.

In a statement, Gilead said it was “concerned” that the data from the trial had not undergone vigorous review, and that it was unclear whether any “conclusive findings” could be drawn from the results.

Earlier this month, data from a US study of remdesivir by Gilead showed the treatment cut patients’ COVID-19 recovery time by five days compared with patients who got a placebo in a trial comprised of 1,062 subjects.

Remdesivir received emergency use authorisation from the Food and Drug Administration in the US on May 1, and has since been given regulatory approval in several other countries.

WHO began the Solidarity trial after a COVID-19 research forum in February recommended the evaluation of treatments for the disease and experts identified four repurposed antiviral drugs that could have at least a moderate effect on mortality.

The trial was designed to be adaptive, allowing unpromising drugs to be dropped and others to be added. The trial stopped using hydroxychloroquine and lopinavir in June.

“The unpromising overall findings from the regimens tested suffice to refute early hopes, based on smaller or non-randomized studies, that any will substantially reduce inpatient mortality, initiation of ventilation or hospitalisation duration,” the preliminary study found.

Solidarity continues to recruit about 2,000 patients a month in its search for more effective treatments for COVID-19 with many countries, especially in Europe, now experiencing a surge in new cases of coronavirus. Nearly 39 million people around the world have been diagnosed with COVID-19 and more than one million have died.

Newer anti-viral drugs, immunomodulators and anti-SARS-CoV-2 monoclonal antibodies are now being considered for evaluation, the WHO said.