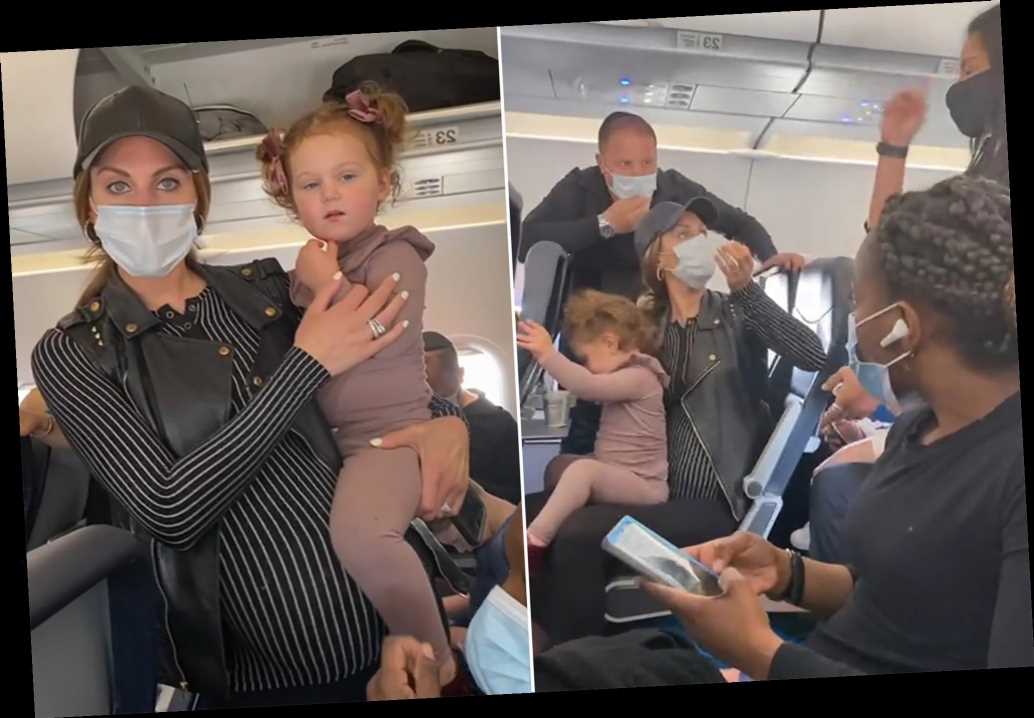 Video shows a Spirit Airlines flight attendant threatening to kick a family of four off a plane in Florida on Monday — arguing that their 2-year-old girl wasn’t wearing a mask.

All of the passengers on the flight out of Orlando International Airport were eventually forced to get off the plane before later being allowed back on board.

In footage posted on social media, a flight attendant told the Jewish family — including a toddler sitting on her pregnant mom’s lap eating yogurt and a dad with his mask around his chin — that they needed to exit the plane for “non-compliance” with the mask rules.

The dad pulled his mask up over his mouth and nose but the Spirit staffer nodded to the tot and said “She’s not wearing a mask,” according to the clip.

“The baby?” the mom replied incredulously.

A woman seated next to them points out that “a lot of kids aren’t wearing masks.”

“I’ll make sure he wears it. Everything is going to be fine,” said a man who appeared to be filming the interaction.

“It’s not my choice. You have to take your stuff and get off,” the airline worker insisted, repeatedly saying the family was in “non-compliance with the mask policy.”

“We’re done talking. The pilot wants you off, so you have to get off,” she said.

The mom continued to plead that “She’s a baby. She just turned 2 a month ago. She’s been trying to wear it.”

The flight attendant threatened to call the police before walking away, according to the video.

Another clip showed all of the passengers packing up as the dad tells someone, “the captain was OK with it, the entire plane was OK with it but there was one African American that was not OK with it.”

He also notes that his wife is pregnant, that his daughter just turned 2 and that his son, who was sitting nearby, has special-needs and experiences seizures.

A third video showed cops in the walkway leading out of the plane, with one female officer heard saying “They’re the ones who were the problem” as the family appears to walk by.

Orlando Police said they were called just before noon on Monday about a general disturbance aboard a Spirit flight out of the airport.

“Upon arrival, officers saw that the flight was in the middle of de-boarding. Our officers stood by, while Spirit Airlines resolved the issue,” a spokesman said.

A Spirit representative insisted to The Post that it was the parents who broke the airline’s face-covering policy, and that their violation was not caught on camera.

The family was given a warning and allowed to re-board the flight and proceed to their destination, the rep said.

Spirit requires all passengers to wear face-coverings over their nose and mouth, except when eating or drinking. Children under the age of 2 are exempt.