This is the hilarious moment a fox steals a woman’s sandals from outside her home on the outskirts of Washington DC.

Sajan Mohammed of Potomac posted the footage from his security camera which covered the outside of his family’s home.

He said: ‘My wife was complaining about a missing sandal from the rear of the house. 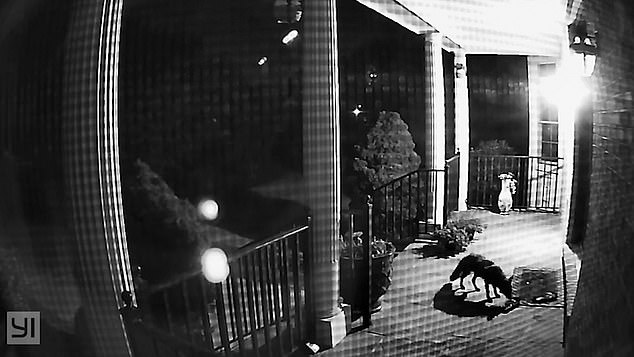 This is the moment a fox approached a pair of sandals outside Sajan Mohammed’s home in  Potomac, Maryland before stealing them 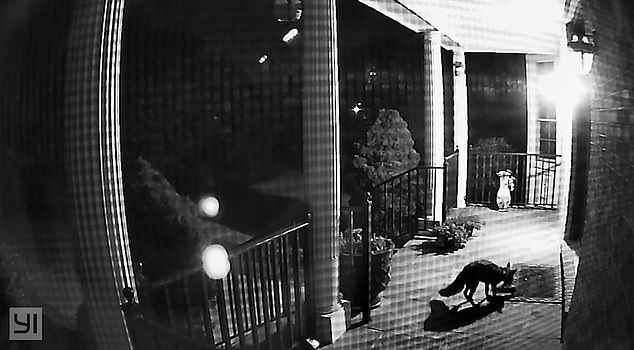 ‘I dismissed the issue and asked her to search for it. The next day she lost her sandals from the front door. That is when we realized that this was something else. So I started looking at our security camera.’

Mr Mohammed said he scrolled through the footage and saw the sandal was still outside at 3am, but by 3.20am it was gone.

On closure inspection he saw a fox approach and steal the sandal.

Amazingly, the fox returns after almost two minutes to carry off the second sandal from the doorstep.

Mr Mohammed told MSN that in total three pairs of sandals have been stolen: ‘I thought it was a very smart fox.

Margaret Innes, Assistant General Curator of the Maryland Zoo in Baltimore said: ‘If they have young kits that they are teaching to hunt, they are going to bring objects back.

‘A nice stinky shoe, especially if it’s leather is going to be an interesting item to them.’