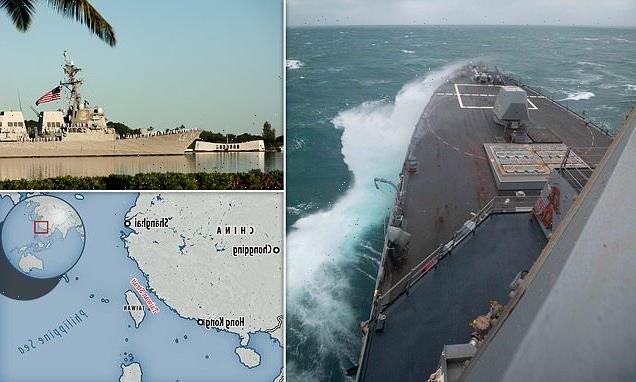 A US warship has riled China by sailing through the sensitive Taiwan Strait yesterday, as Beijing warned against ‘escalating tensions and undermining peace’ in the region.

In recent years, US warships, and on occasion those from allied nations such as Britain and Canada, have sailed through the strait, drawing the ire of China, which claims the island territory of Taiwan as its own.

In a statement, the US military said the Arleigh Burke-class guided-missile destroyer Chung-Hoon carried out the transit.

‘Chung-Hoon’s transit through the Taiwan Strait demonstrates the United States’ commitment to a free and open Indo-Pacific,’ the statement added. 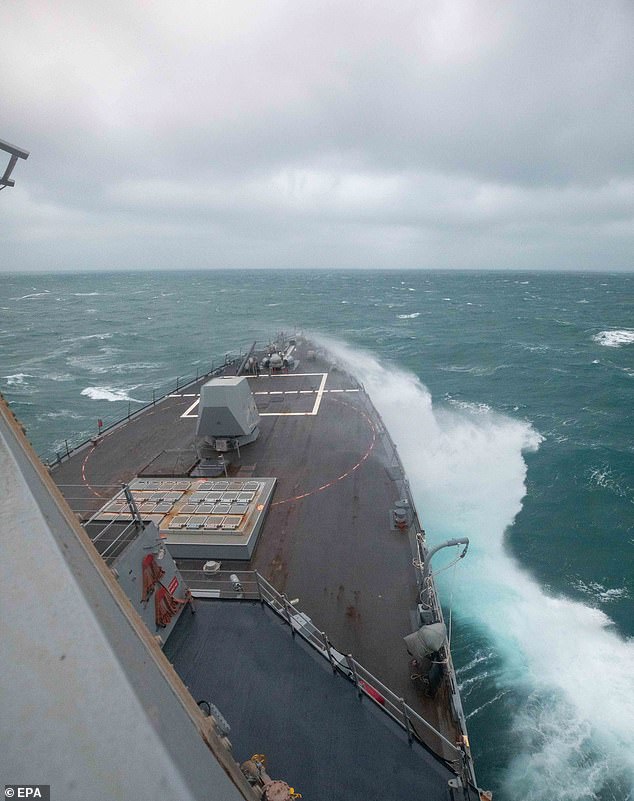 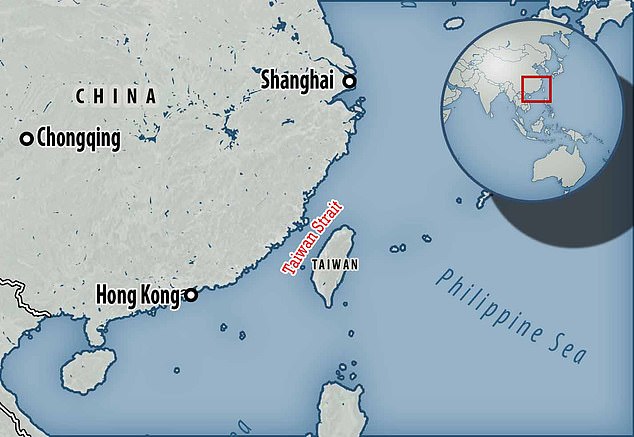 In a statement, Liu Pengyu, spokesman for China’s embassy in Washington, said China firmly opposed the move and urged the United States to ‘immediately stop provoking troubles, escalating tensions and undermining peace and stability across the Taiwan Strait.’

‘US warships frequently flex muscles in the name of exercising freedom of navigation. This is not about keeping the region free and open,’ the statement said.

‘China will continue to stay on high alert and is ready to respond to all threats and provocations at any time, and will resolutely safeguard its national sovereignty and territorial integrity.’

A spokesman for the Eastern Theatre Command of the Chinese People’s Liberation Army said it organised troops to monitor and guard the ship’s transit, and ‘all movements were under control’.

Taiwan’s Defence Ministry said the ship sailed in a northerly direction through the strait, that its forces had monitored its passage and observed nothing out of the ordinary.

China accused the US of ‘publicly hyping’ the passage, adding that its forces monitored the ship the entire time.

‘The Eastern Theatre Command of the Chinese People´s Liberation Army organized troops to monitor the U.S. ship’s entire passage and was fully cognisant of all its actions,’ the command’s spokesperson Col. Shi Yi said in a brief statement posted to social media.

China’s attempts to intimidate Taiwan militarily have risen to new heights in recent months, raising concerns in Washington that Beijing is growing closer to using force.

That has included firing missiles into the sea and sending planes and ships across the dividing line in the Taiwan Strait in August in response to a visit to the island by U.S. House Speaker Nancy Pelosi.

Last month, it sent a record-breaking 71 planes and seven ships toward Taiwan in a 24-hour display of force after expressing anger at Taiwan-related provisions in a U.S. annual defense spending bill.

The narrow Taiwan Strait has been a frequent source of military tension since the defeated Republic of China government fled to Taiwan in 1949 after losing a civil war with the communists, who established the People’s Republic of China. 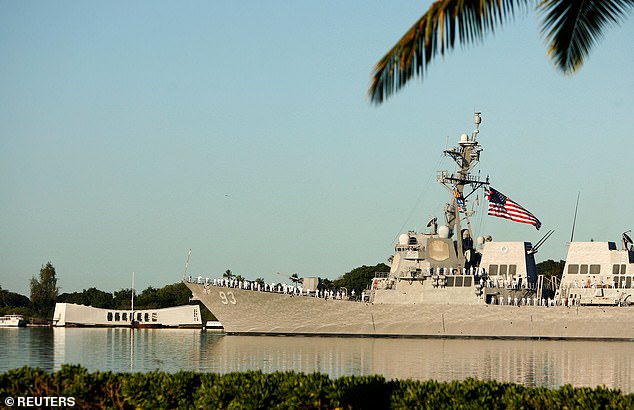 In a statement, the US military said the Arleigh Burke-class guided-missile destroyer Chung-Hoon carried out the transit (file photo) 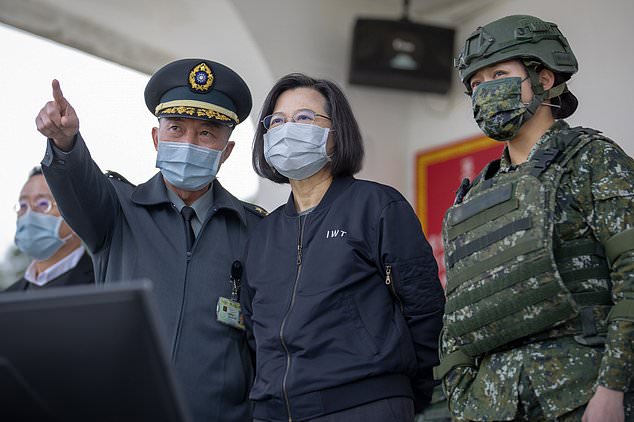 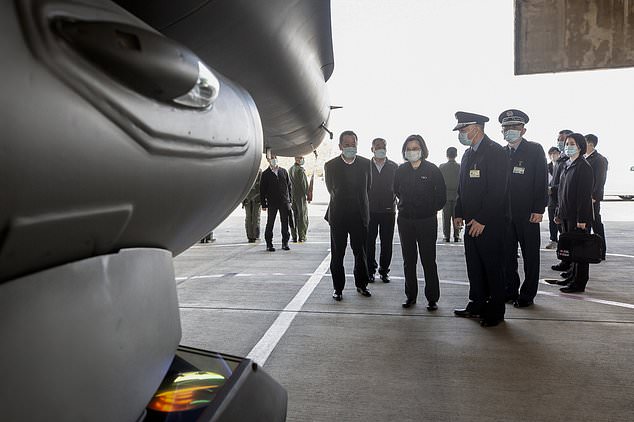 President Tsai Ing-wen, center, accompanied by officials, looks at the F-16 fighter jet at a military base in Chiayi, southwestern Taiwan 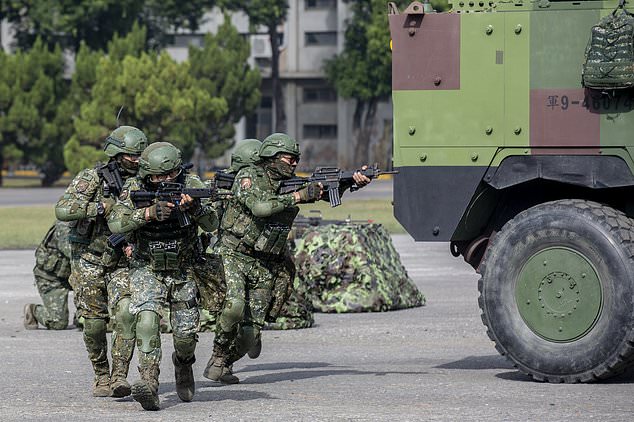 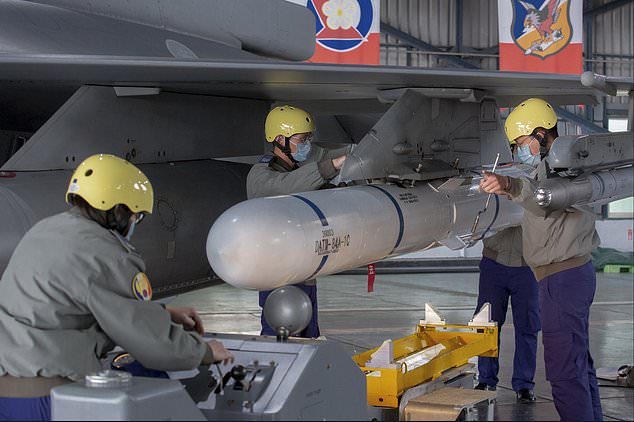 Taiwan is expanding domestic shipbuilding and its arms industry and buying more defensive weaponry from the U.S. Pictured: ground crew attach a missile to the wing of an F-16 jet fighter

The United States has no formal diplomatic relations with Taiwan, but is bound by law to provide the island with the means to defend itself.

China has never ruled out using force to bring Taiwan under its control. Taiwan vows to defend itself if attacked, saying Beijing’s sovereignty claims are void as the People’s Republic of China has never governed the island.

A Chinese military plane came within 10 feet of a US air force aircraft in the contested South China Sea last month and forced it to take evasive maneuvers to avoid a collision in international airspace.

The close encounter followed what the United States has called a recent trend of increasingly dangerous behavior by Chinese military aircraft.

Taiwan is seeking to boost its defences against the rising threat from China.

That includes expanding the domestic shipbuilding and arms industry, buying more defensive weaponry from the U.S. and extending the national service requirement for all men from four months to a full year beginning in 2024.

Along with observing the display by an army mechanised infantry battalion, Tsai visited the air force’s Fourth Tactical Fighter Wing, whose pilots are largely responsible for intercepting Chinese military aircraft approaching the the midline of the Taiwan Strait.

‘I would like to reiterate that the continuous activities of the People’s Liberation Army (around Taiwan) are not helpful to cross-strait relations nor to the peace and stability of the region,’ Tsai said.

‘As we are facing the expansion of authoritarianism, we can only but strengthen the country’s combat capabilities and toughness to secure our national security and interests,’ said Tsai.