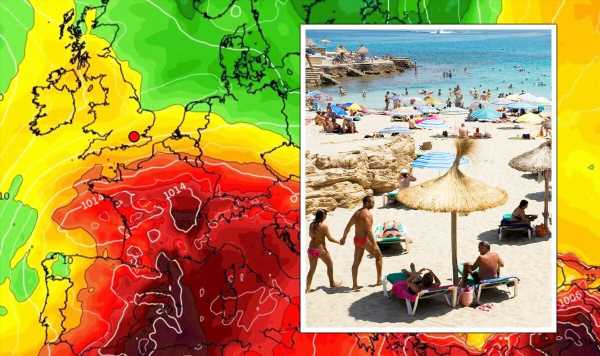 The start of July is set to be a hot one, mostly for the south east, thanks to France seeing its mercury skyrocket to 37C inland. Cities like Paris and Lyon will record those humid temperatures – and Jim Dale, senior meteorologist at British Weather Services has said some parts of England will get a taste. Speaking exclusively to Express.co.uk, he said: “As we end this month and arrive in July, yes is the answer. “Not yet will it be to the degree of the last heat spike, but certainly very warm or rather hot after a yet to arrive spell of cool showery weather.

“The reason for this weather is because of a high pressure system from the Azores in Portugal ridging across us.”

For exactly how long is yet to be determined, creating uncertainty at this point over whether this country will see its first official heatwave of 2022.

From Thursday, June 30, parts of France and Germany will see highs of mid to late 30s – indicating a knock-on effect into the UK potentially by Friday, July 1.

The Met Office’s long range forecast alludes to hot temperatures, but will not explicitly predict a heatwave until the data is more certain. 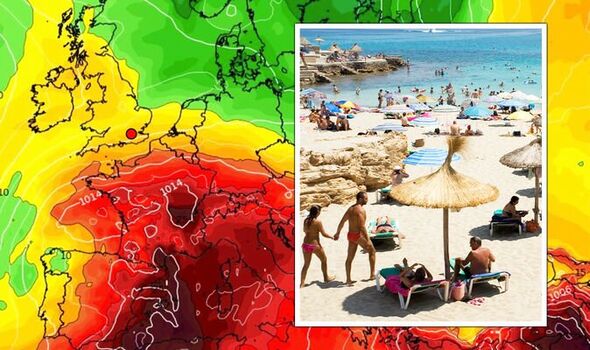 It says: “Conditions look to become more settled by the start of July as high pressure builds.

“Temperatures close to or below normal at first before turning widely above average later in the period.”

Met Office spokesman Grahame Madge also spoke exclusively to this title about why parts of Europe are hotting up, and what it means for the UK.

While the country is set for a “fleeting” heat spell, the Met Office remains sceptical over how long these temperatures will stay.

He said: “A slight change in conditions could return for a prolonged period like it has in Spain and other parts of the west.

“Weather patterns predict a mix of high and low pressure areas that would encourage a warm flow into the south east of England.

“Low pressure to the west would encourage weather to come further south.

“The way the weather pattern is set up could bring “fleeting” streams from continental Europe to the south east and East Anglia.

“But Atlantic weather will push this out of the way again.”

Mr Madge said Europe will experience a surge in temperatures due to plumes of heat coming from North Africa.

He said climate change was to blame for North Africa’s “warmer air.”

While it’s very hot at this time of year, much of Europe has already warmed up too, both of which provide the key ingredients for scorching conditions.