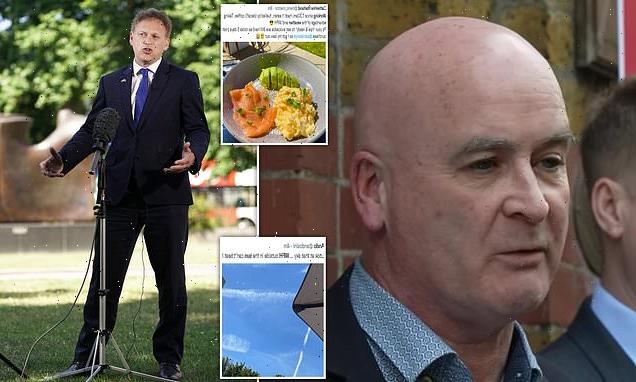 Labour MPs to join rail strike picket lines: The UK starts grinding to a halt as unions plunge Britain into a £1bn ‘lockdown’ and the RMT is accused ‘punishing millions of innocent people’ in pursuit of a massive pay rise

Britain’s railways will come to a grinding halt today after last-ditch talks failed to avert the biggest strikes for 30 years.

The militant RMT union was accused of ‘punishing millions of innocent people’ by pressing ahead with the walkouts, despite rail bosses offering workers a pay rise of at least 3 per cent – the same given last year to NHS staff who battled the Covid-19 crisis.

The rail industry will also take a £150 million hit at a time when pre-pandemic passenger numbers are yet to return.

Boris Johnson will condemn the strikes today ahead of a Cabinet meeting. He will say: ‘The unions are harming the very people they claim to be helping.

‘By going ahead with these rail strikes, they are driving away commuters who ultimately support the jobs of rail workers, while also impacting businesses and communities across the country.

‘Too-high demands on pay will also make it incredibly difficult to bring to an end the current challenges facing families around the world with rising costs of living.’ 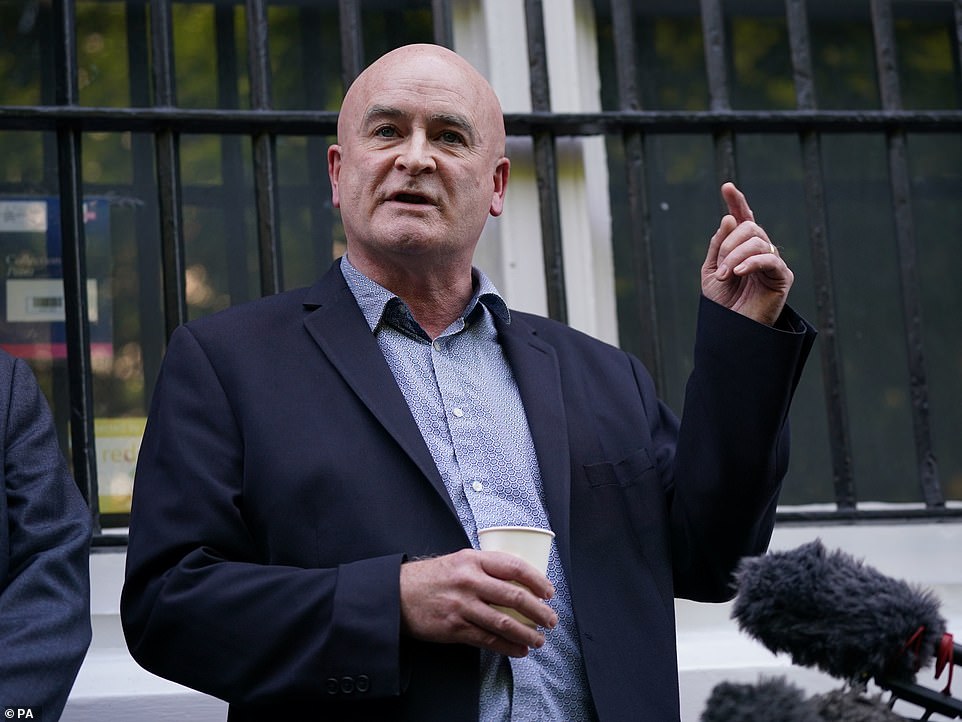 Mick Lynch, boss of the militant rail union RMT, has confirmed that walkouts will go ahead today, on Thursday and Saturday 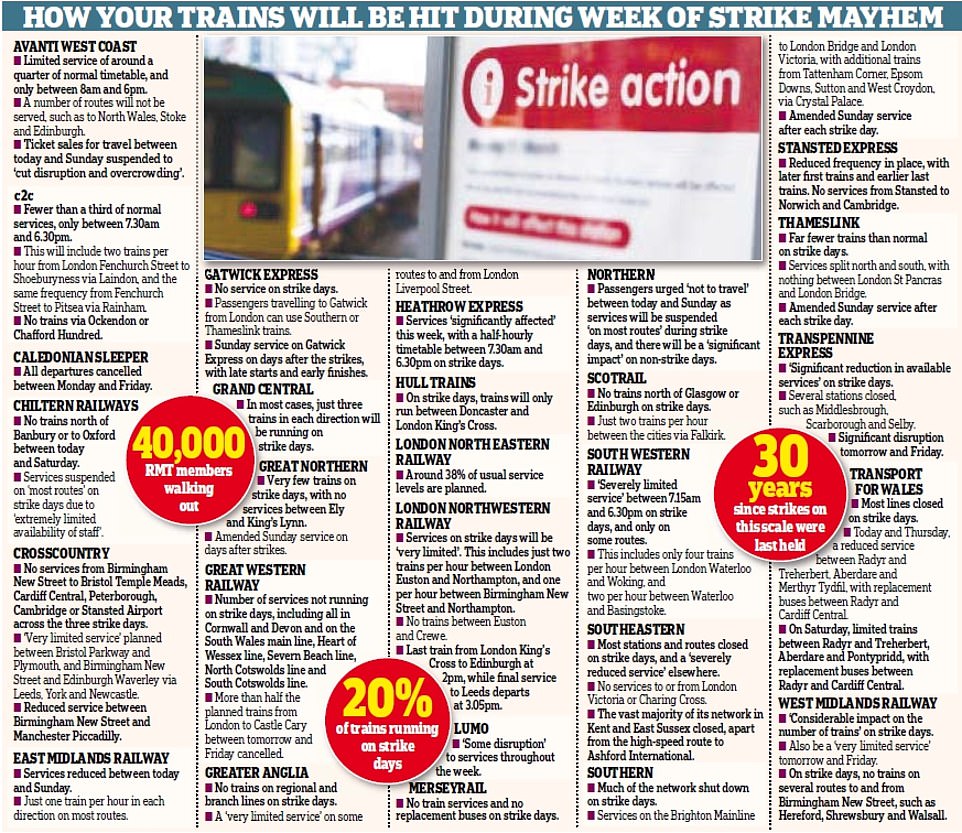 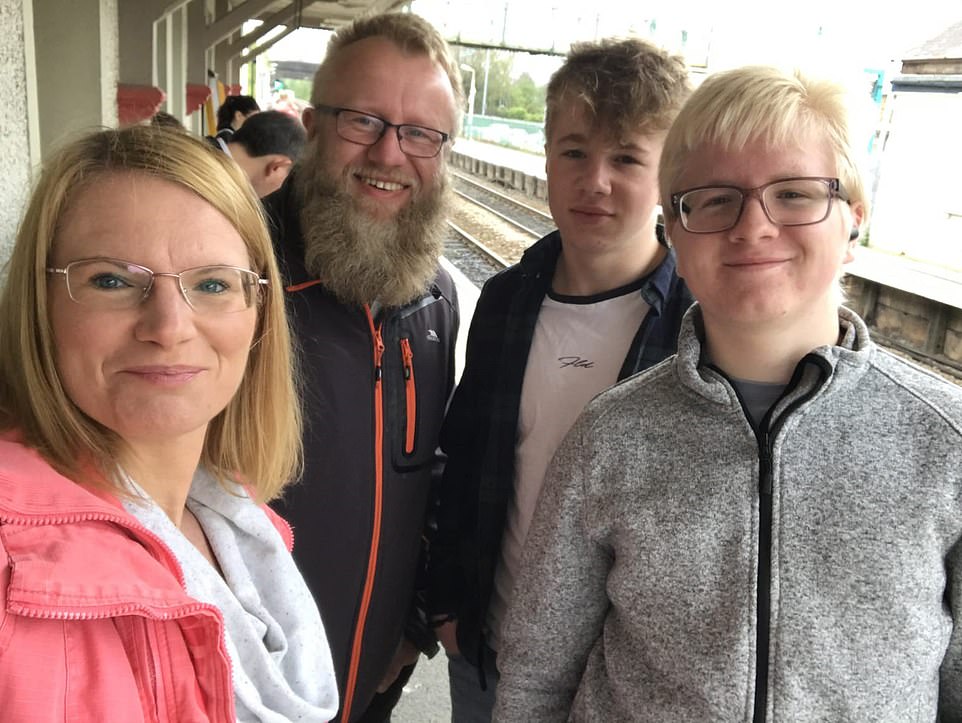 Marta Kotlarak, 40, and husband Radek, 41 with Michael, 18, and Jacob, 16. Jacob has GCSE additional maths on Tuesday and Jacob A Level maths on Thursday. Marta having to cancel business appointments on both days 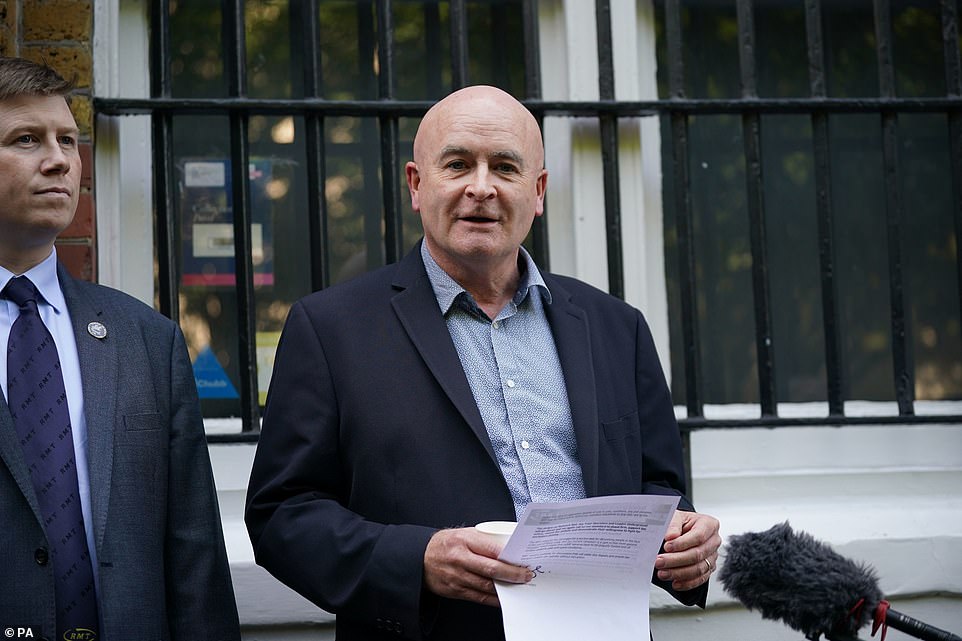 Mick Lynch, general secretary of the Rail, Maritime and Transport (RMT) union, at its headquarters in London this afternoon 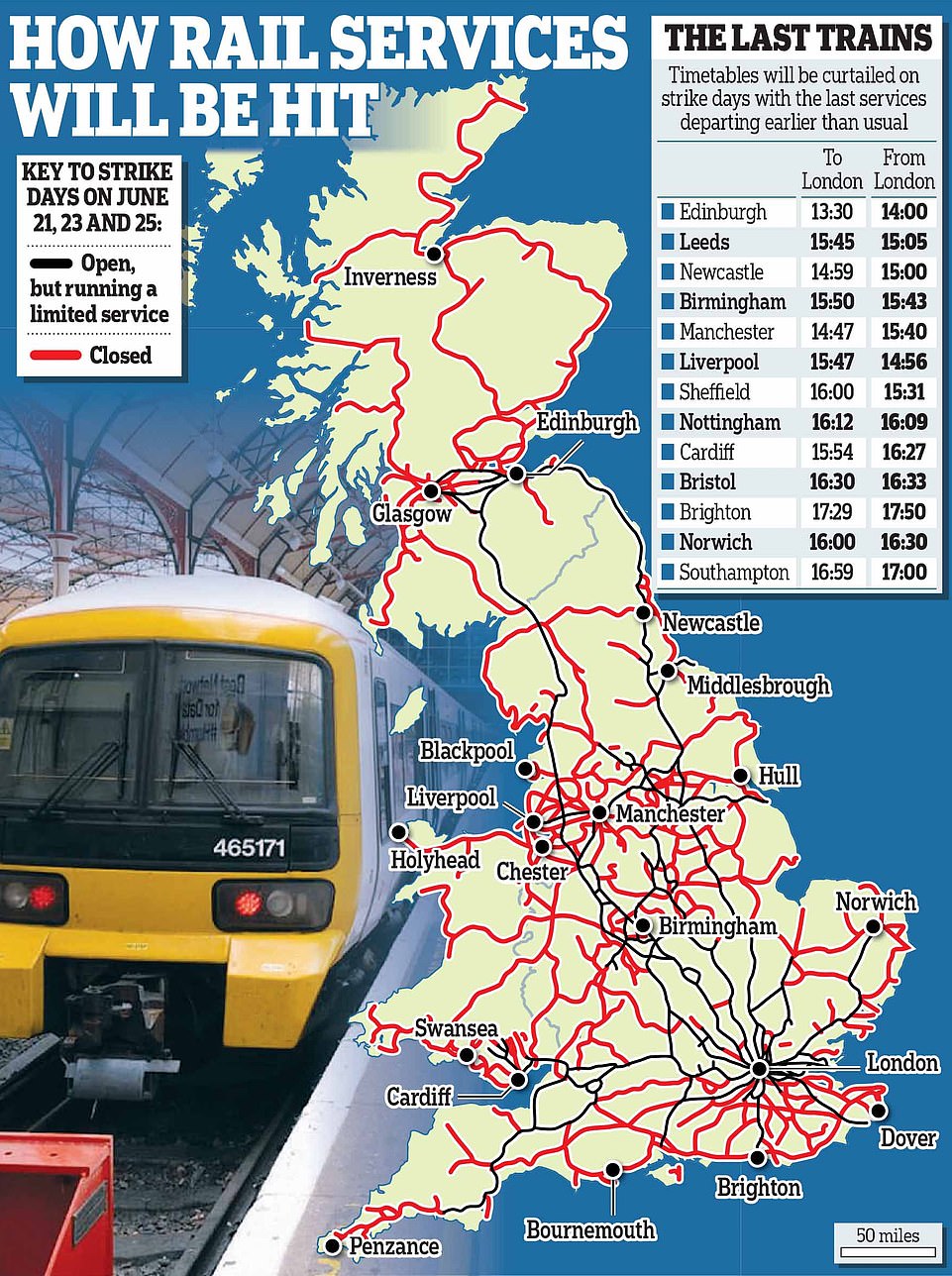 There had been hope of a breakthrough in the row over rail jobs and pay after sources close to the negotiations said there was ‘some movement’ from the RMT and ‘small steps of progress’ were being made. But it was dashed after union boss Mick Lynch confirmed walkouts will go ahead today, on Thursday and Saturday.

Network Rail officially offered the RMT a 2 per cent pay rise with ‘no strings attached’ and a further 1 per cent later in the year if certain efficiency targets were met.

It is understood the rise could have been as much as 5 per cent if the union was willing to accept further modernisation of working practices, such as technology being used more to detect potential faults on the network.

Intense negotiations continued last night, with a source suggesting a deal to avert Thursday’s and Saturday’s walkouts was still possible. They said: ‘It ain’t over until the fat lady sings. They wouldn’t be coming back, especially at this 11th hour, if we weren’t getting closer, and we are getting closer – it’s just not enough on either side yet to have a good enough package to avert the strikes at this point.’

The RMT is understood to want a pay increase of at least 7.1 per cent, and a guarantee of no compulsory redundancies.

Last night Mr Lynch did not rule out strikes going on for longer than the infamous Southern Rail dispute, which ended after 18 months in 2017, raising the prospect of similar walkouts for months. He said: ‘It will go on until somebody offers us a deal that we can accept and we can put to our members and they vote for it in a referendum.’

He dodged the question of whether it was fair for taxpayers to stump up the extra cash to fund the union’s pay demands, adding: ‘Faced with such an aggressive agenda of cuts to jobs, conditions, pay and pensions, the RMT has no choice but to defend our members industrially.’

But Transport Secretary Grant Shapps hit back, saying: ‘By carrying out this action, the RMT is punishing millions of innocent people, instead of calmly discussing the sensible and necessary reforms we need to make in order to protect our rail network.’ 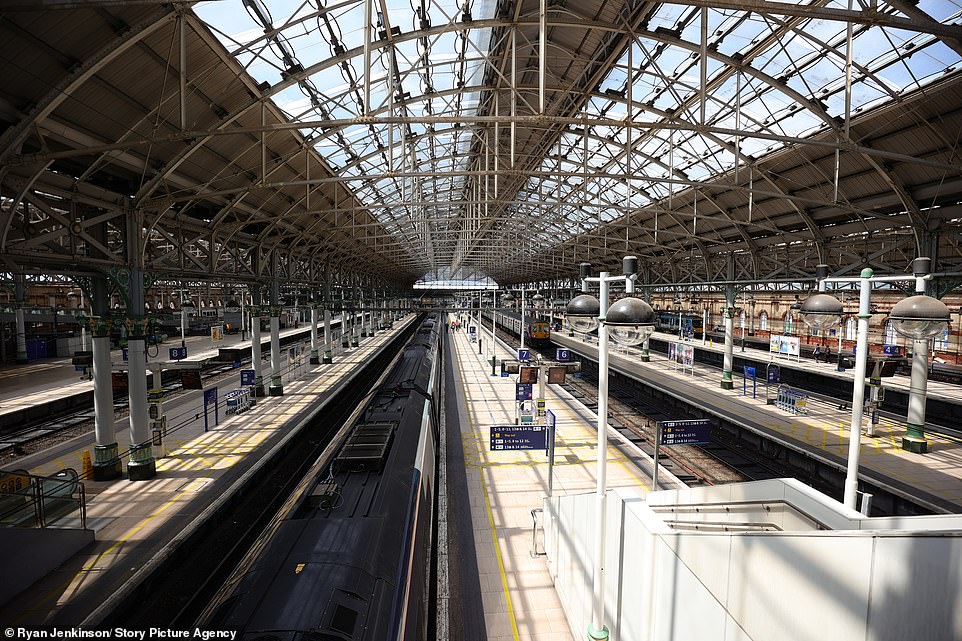 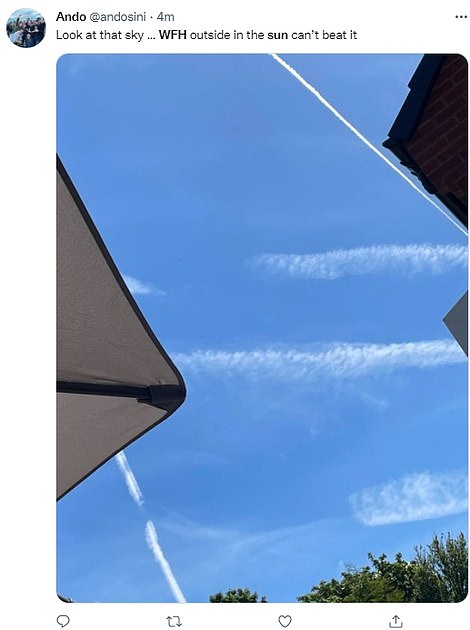 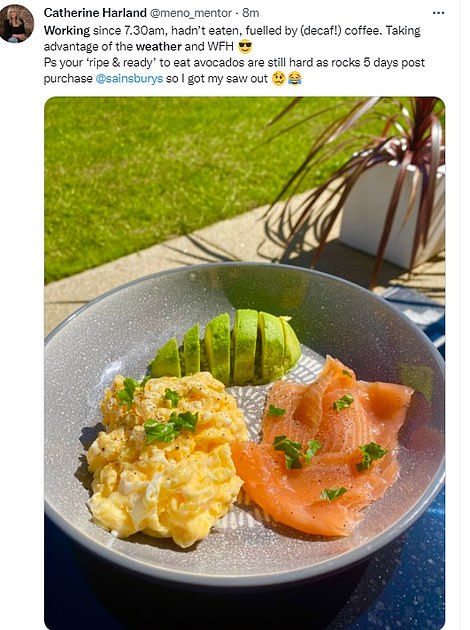 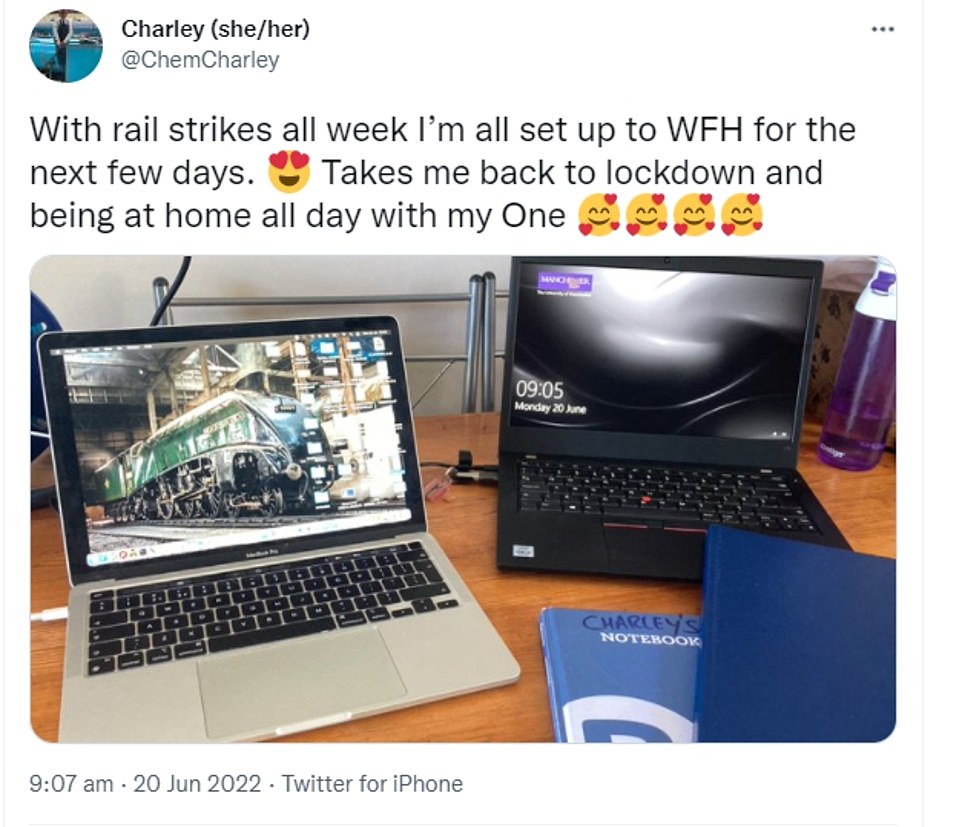 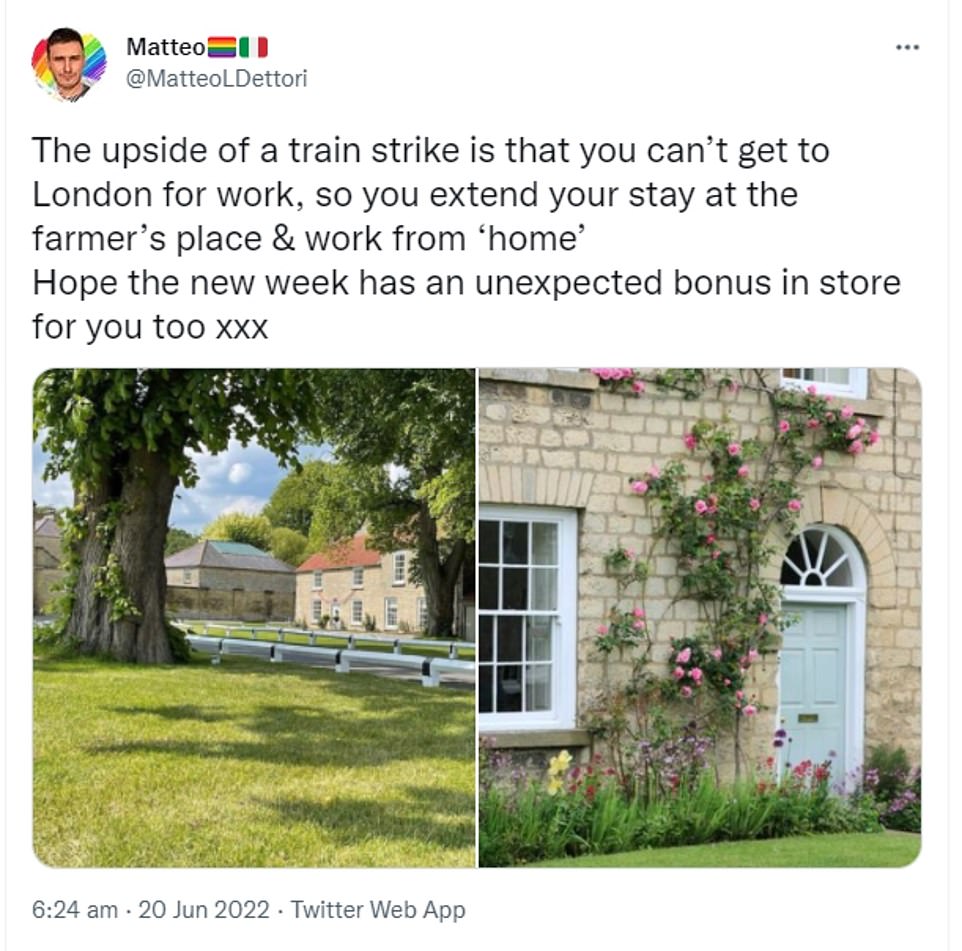 there are some who are celebrating being to work from home for the week – and a tacit admission by some that they will be spending more time sunbathing than getting on with their jobs in the coming days. 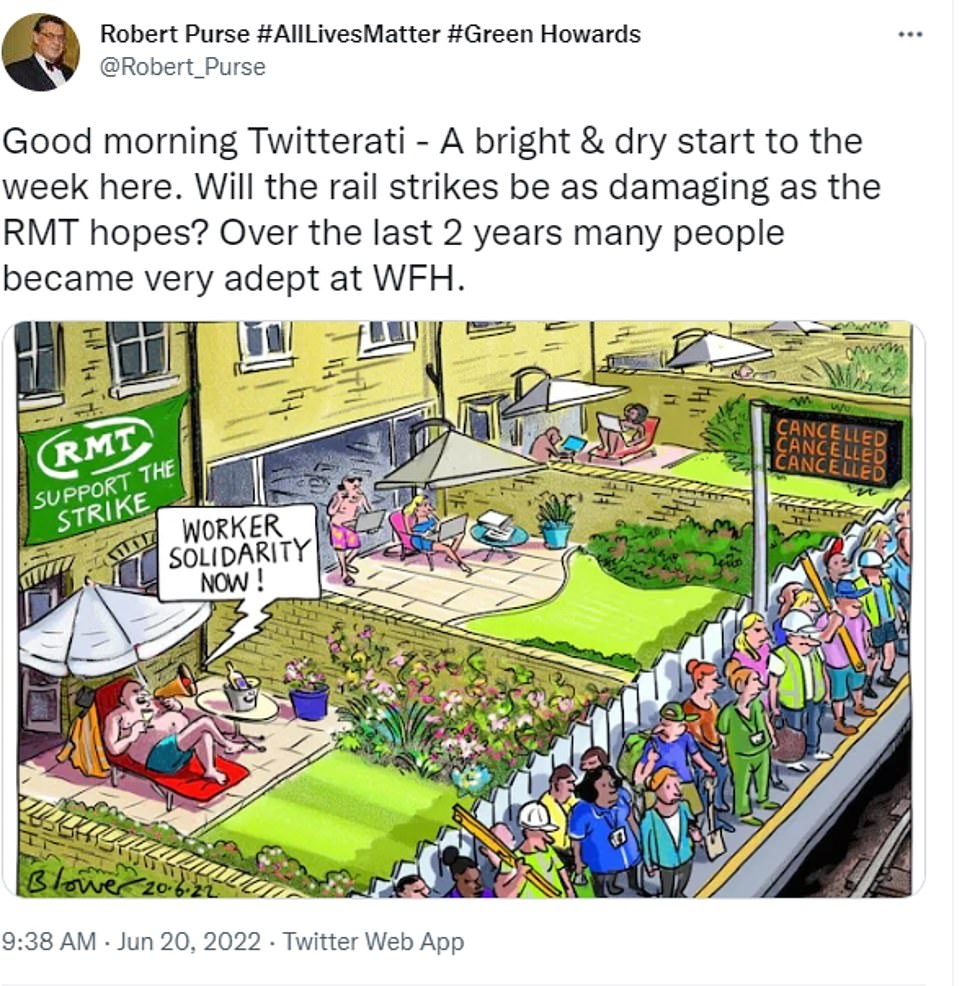 There are some who are celebrating being to work from home for the week – and a tacit admission by some that they will be spending more time sunbathing than getting on with their jobs in the coming days. 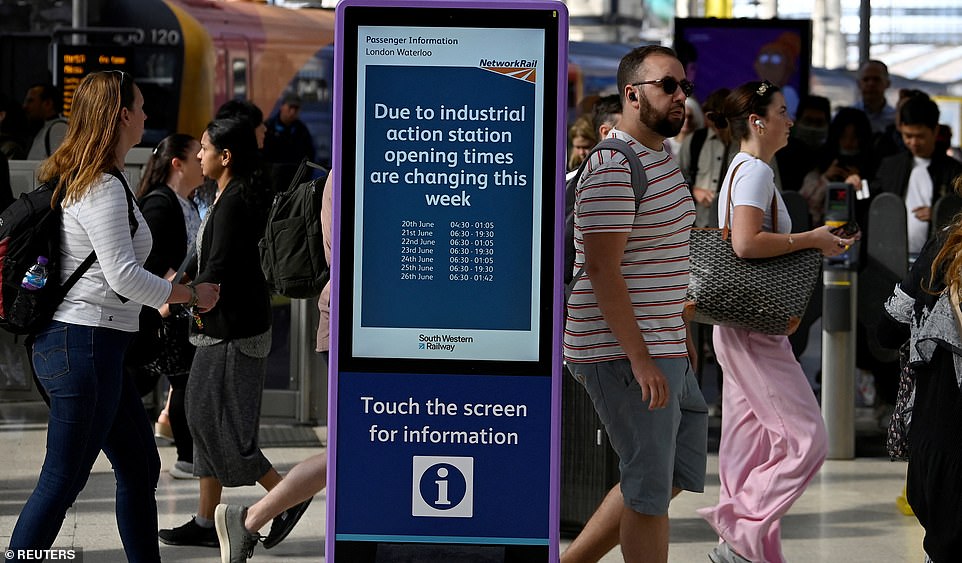 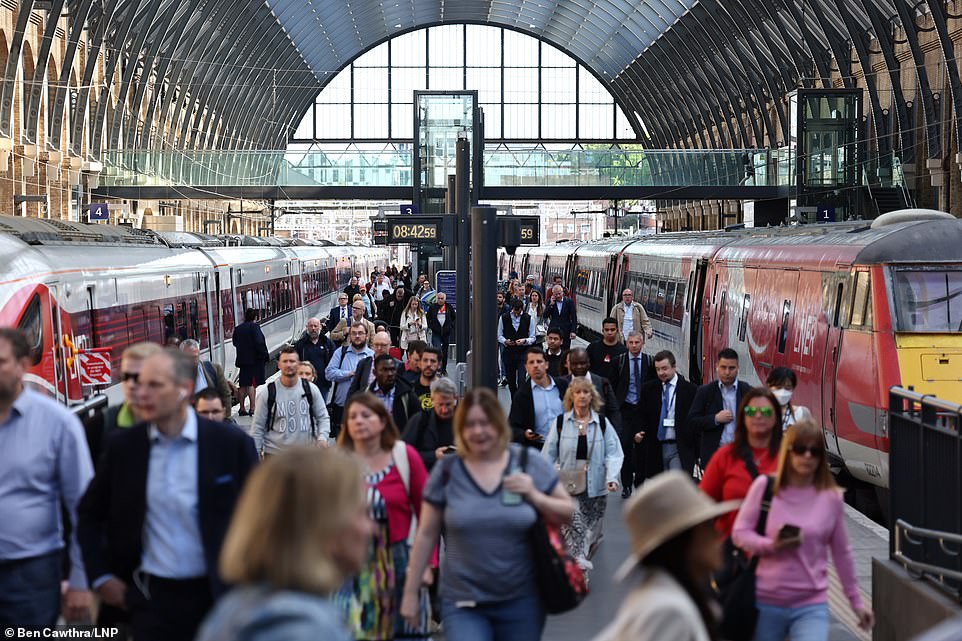 Commuters arrive at Kings Cross station in London. Rail lines across Britain will be closed for three days, starting tomorrow 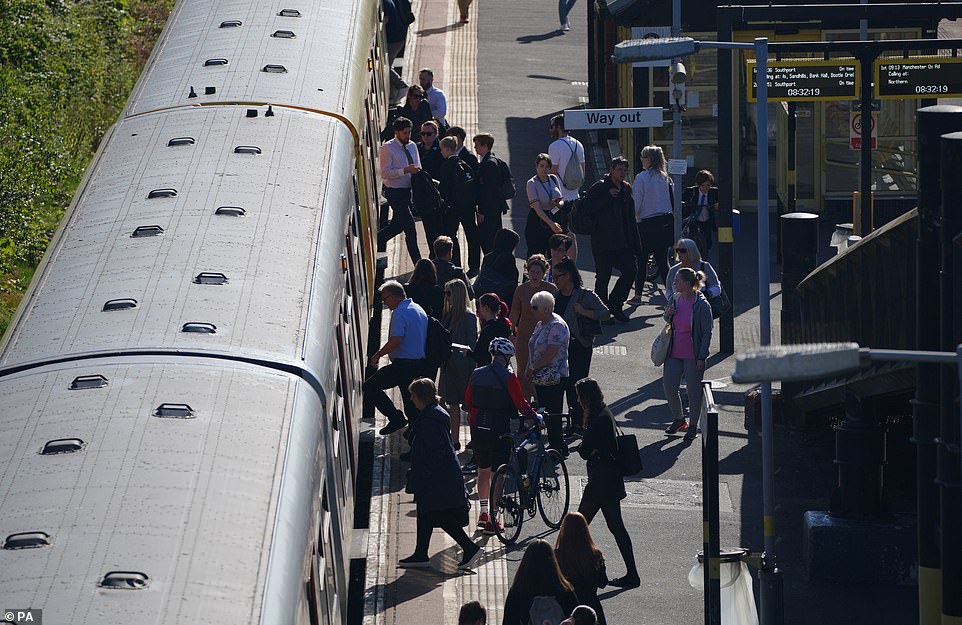 Passengers board a train at Hunts Cross Station, Liverpool. MerseyRail has announced all trains will stop tomorrow due to industrial action. 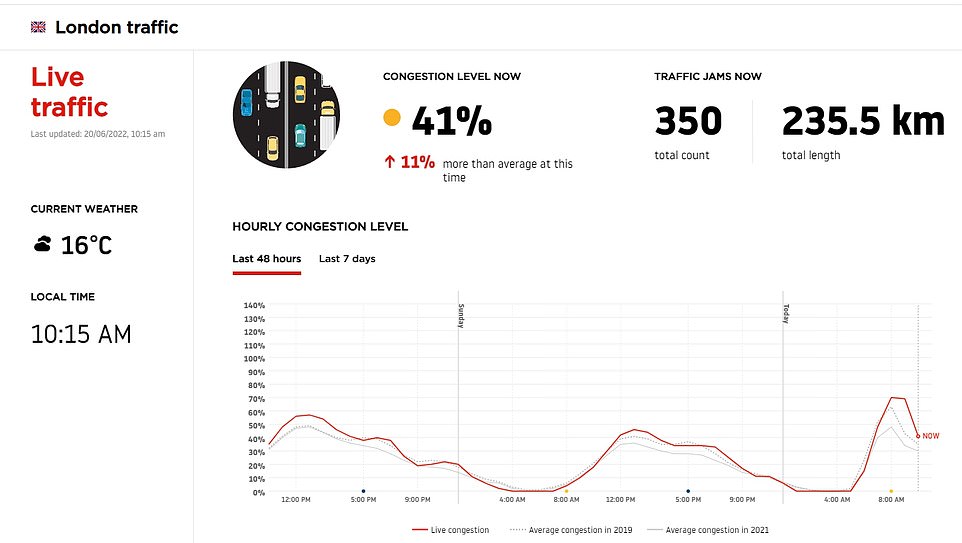 TomTom traffic data revealed that congestion was up 11 per cent in London this morning compared to last Monday, with 350 traffic jams of more than 180 miles in length combined, as people took to their cars and vans to avoid disruption on public transport 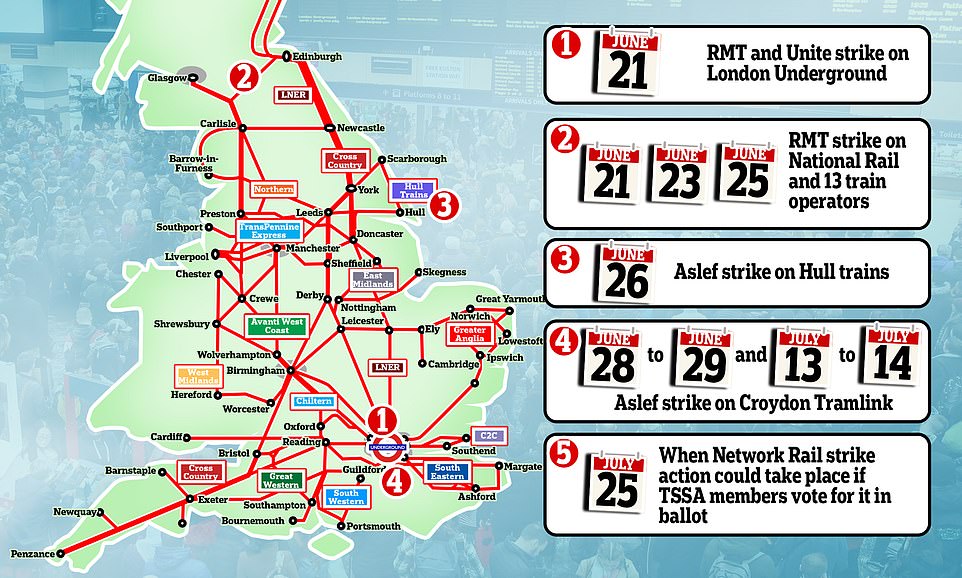 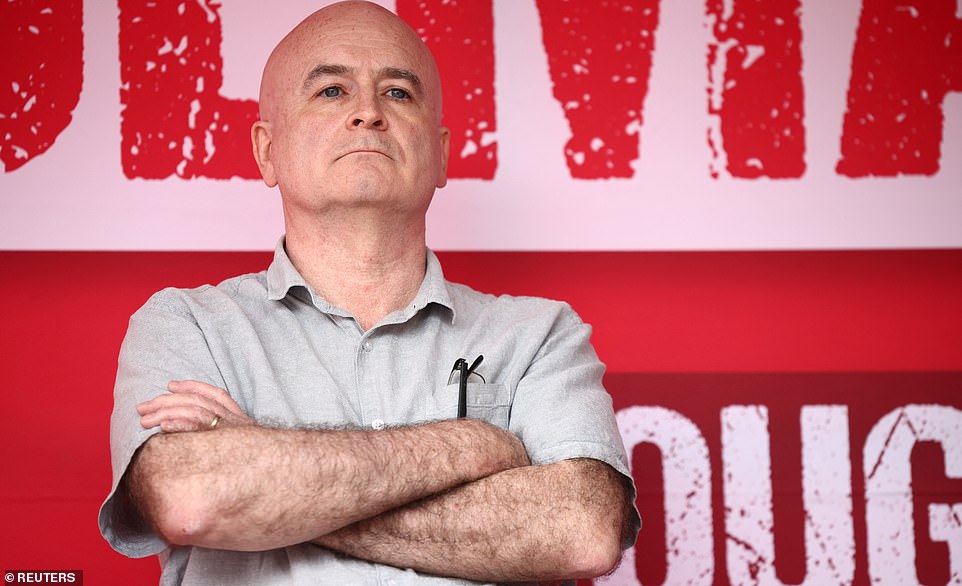 Mick Lynch, Secretary-General of the National Union of Rail, Maritime and Transport Workers speaks at a trades union organised protest march opposed to British government policies at Parliament Square in London on Saturday

He added: ‘We are now on the cusp of major disruption which will cause misery for people right across the country. Many people who do not get paid if they can’t get to work face losing money at a time they simply can’t afford to. Children sitting exams will face the extra distraction of changing their travel plans.

‘And vulnerable people trying to attend long-awaited hospital appointments may have no choice but to cancel.’

Ministers want the railways to make around £2 billion in savings after bailing out the industry to the tune of £16 billion during the pandemic – the equivalent of £600 per household. They also point out that the median salary for rail workers is already £44,000, well above the national average.

Business chiefs said the strikes ‘could not come at a worse time’ for firms hoping for a summer bounce following the damage caused by Covid.

Ros Morgan, chief executive of the Heart of London Business Alliance, said: ‘The rail and Tube strikes will impose another lockdown on the West End at a time when central London’s economy needs all the support it can get.’

Trade body UKHospitality warned the cost to the industry could top £1 billion this week alone as pubs, bars and restaurants are hit, along with other leisure and tourist activities such as theatres. Boss Kate Nicholls said: ‘The planned strike action couldn’t come at a worse time, and might deliver a fatal financial blow to those businesses already struggling to survive.’ 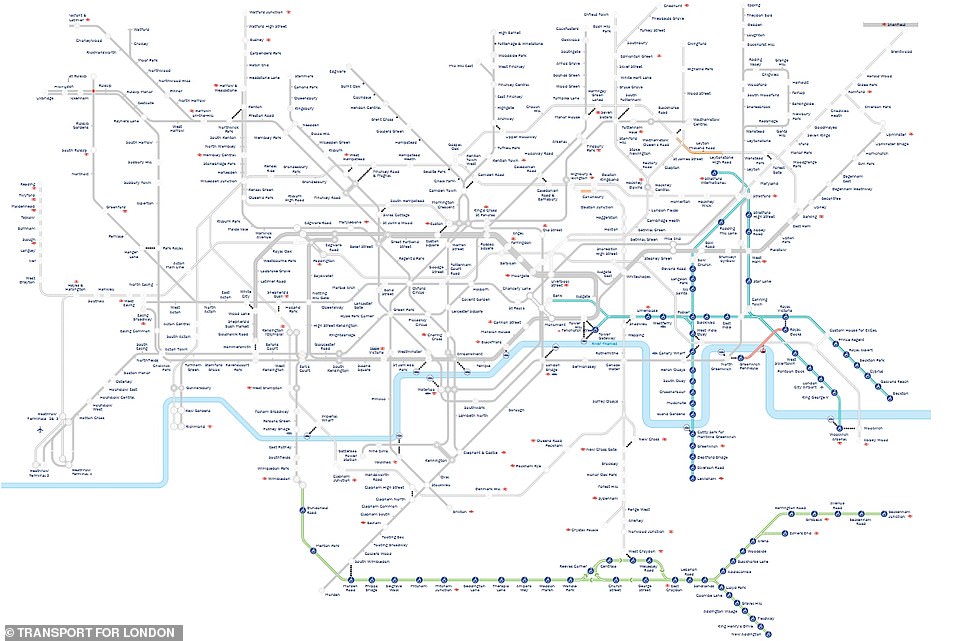 LONDON — This Transport for London map shows greyed-out lines for those that will be affected by disruption from tomorrow.  Only the Croydon Tramlink and Docklands Light Railway are shown as running normally 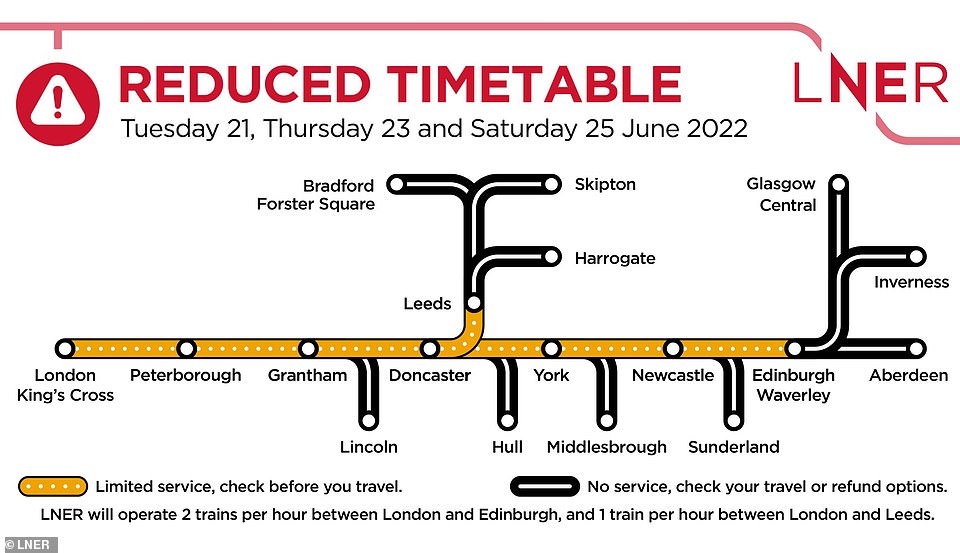 LNER: The operator says it will be running only 38 per cent of its usual trains, with the last from London to Edinburgh at 2pm 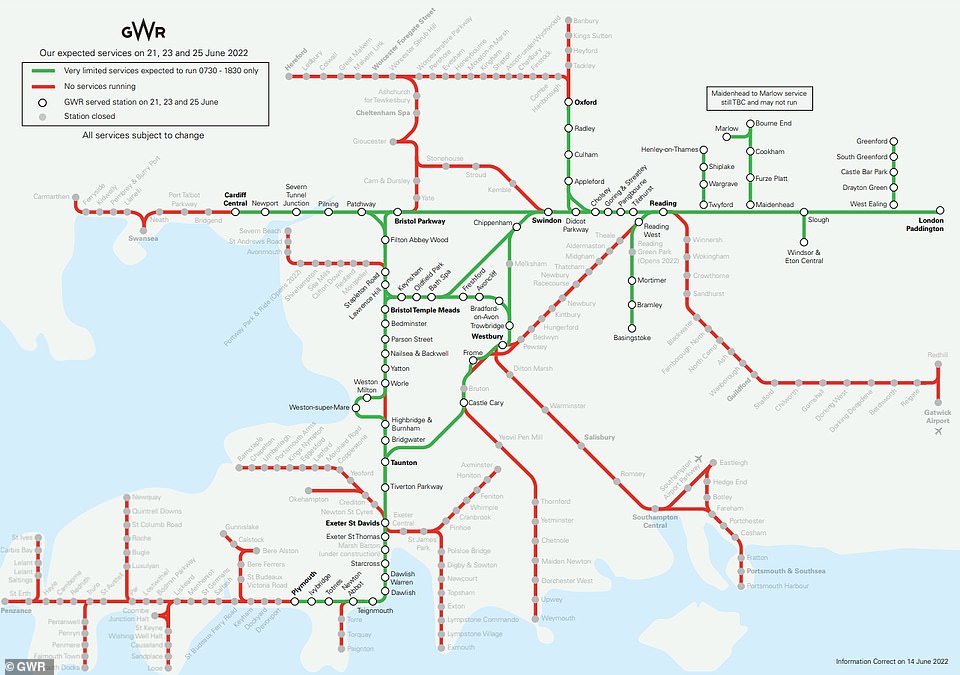 GREAT WESTERN RAILWAY — A very limited services will run Cardiff or Plymouth to London via Bristol, Swindon and Reading 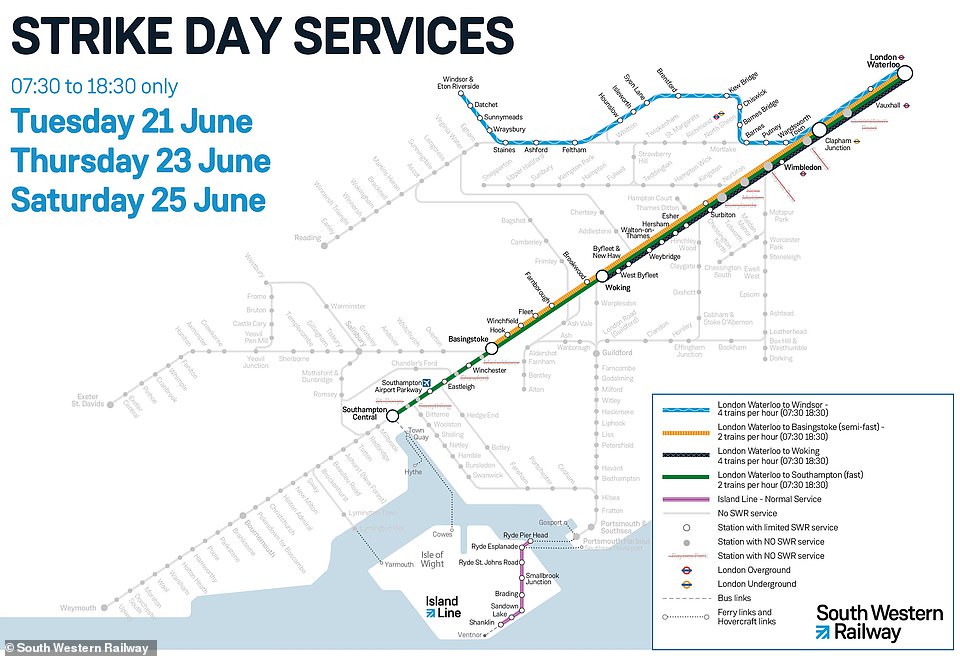 SOUTH WESTERN RAILWAY: There will be no trains beyond Southampton to Weymouth; or beyond Basingstoke to Exeter 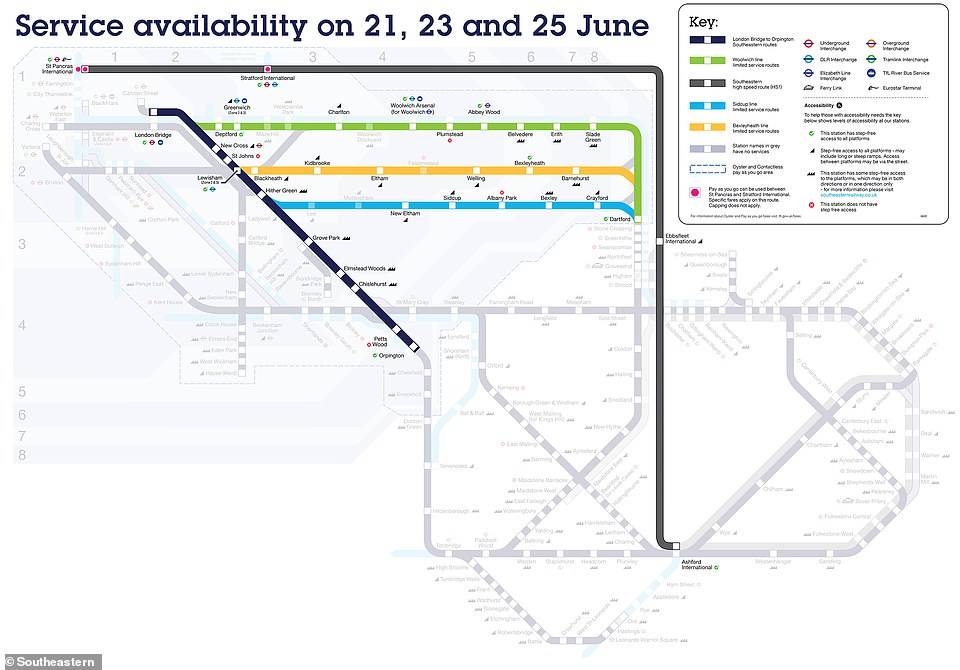 SOUTHEASTERN – Limited services set to run between London, Kent and East Sussex next week on June 21, 23 and 25 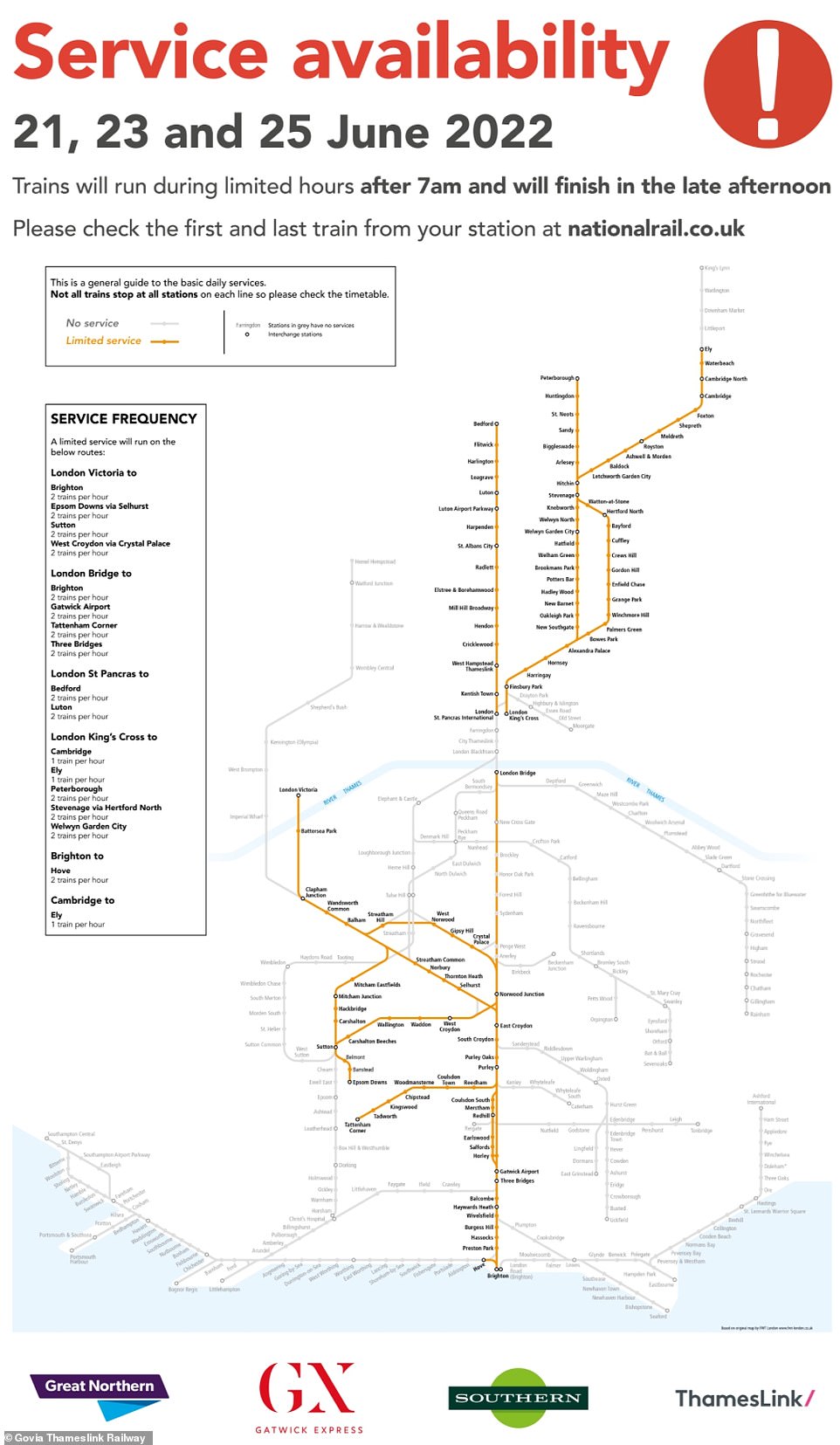 GREAT NORTHERN, GATWICK EXPRESS, SOUTHERN AND THAMESLINK: This map from Govia Thameslink Railway shows the trains expected to operate on its network during strike action next week on June 21, 23 and 25 – a fraction of normal services 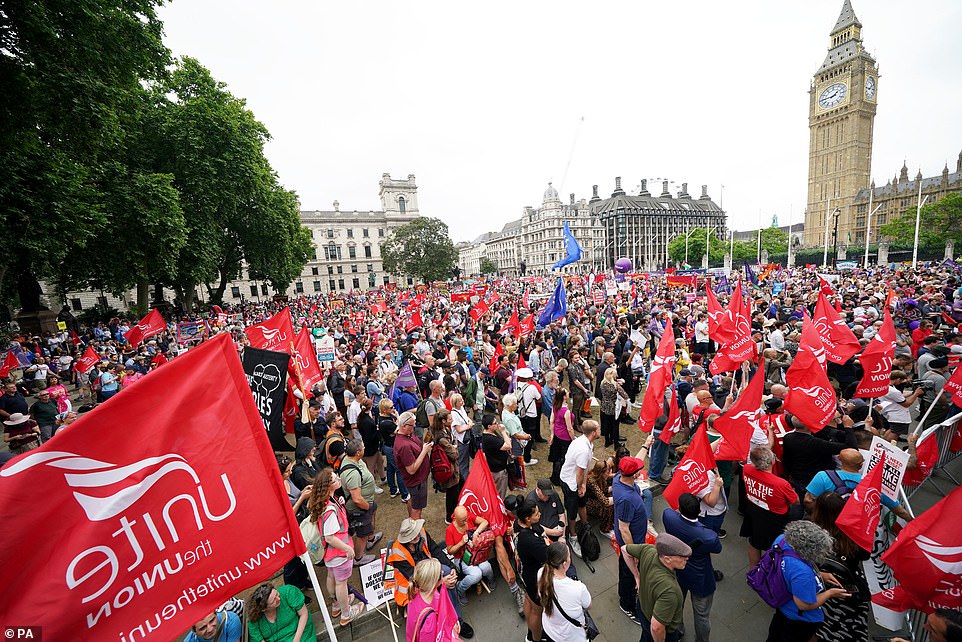 Unison members and members of the public take part in a TUC national demonstration in central London to demand action on the cost of living, a new deal for working people and a pay rise for all workers. Picture date: Saturday June 18, 2022

The boss of the British Beer and Pub Association, Emma McClarkin, said the strikes posed a ‘serious threat’ to the industry and could stop staff getting to work and customers being able to get to venues.

As Labour MPs said they would join striking workers, the unions reacted with fury at reports the party has banned its frontbenchers from picket lines.

A leaked memo from Sir Keir Starmer’s office said Shadow Cabinet members ‘should not be on picket lines’.

Sharon Graham, general secretary of Unite, said: ‘We expect Labour MPs to defend workers, by words and by actions. To instruct Labour MPs not to be on picket lines with workers speaks volumes. You don’t lead by hiding. No-one respects that. It’s time to decide whose side you are on. Workers or bad bosses?’

Around half of the rail network will be shut today, on Thursday and Saturday, with many rural areas completely cut off.

Overall, only one in five services will run as 40,000 RMT members for Network Rail and 13 train companies covering most of the country walk out.

Inter-city services, such as on the East Coast and West Coast main lines, could see service levels of up to 50 per cent. Due to the shift patterns of critical railway staff, such as signallers, only 60 to 70 per cent of services will run on Wednesday, Friday and Sunday due to the knock-on effects from strike days. 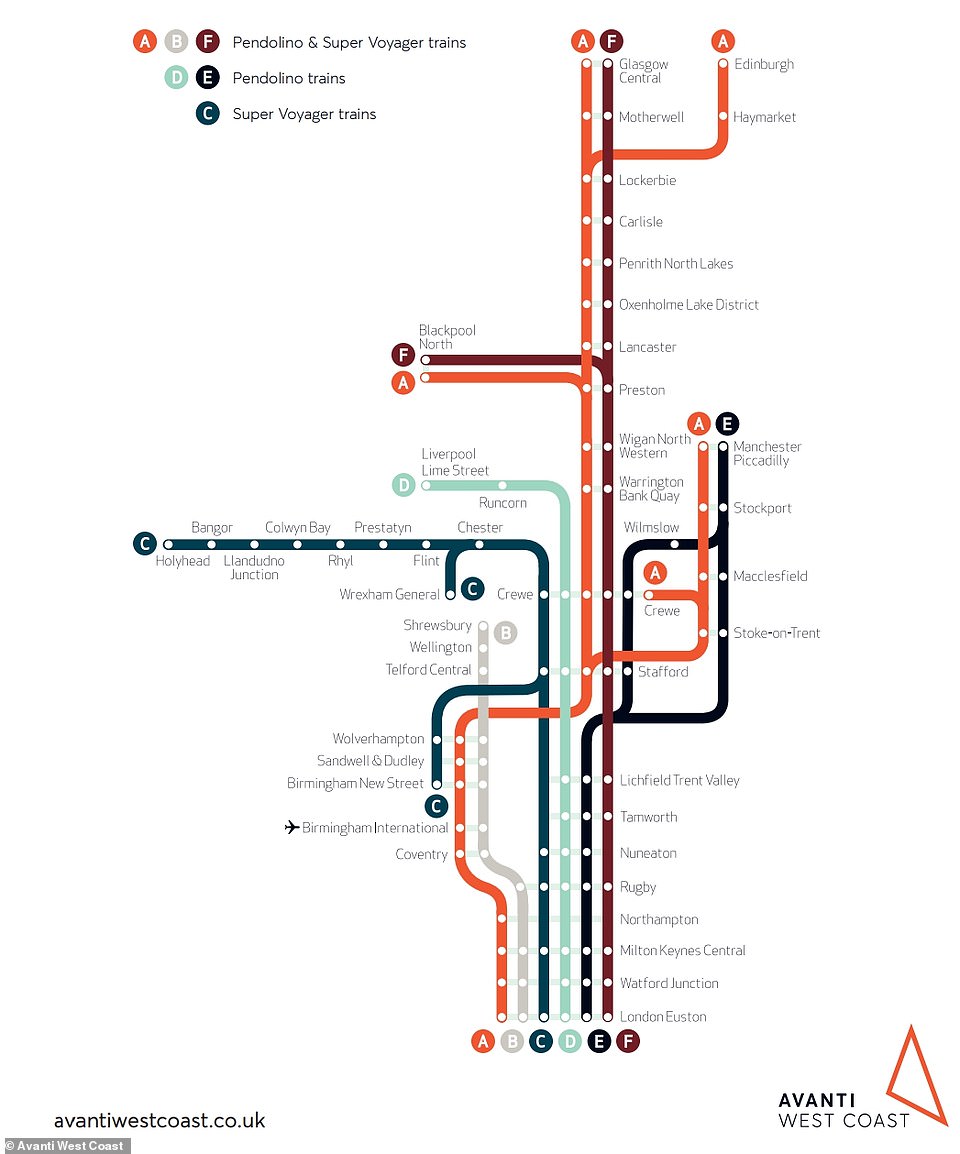 AVANTI WEST COAST: The operator plans to run one train per hour on strike days from London Euston to each of Manchester, Liverpool, Birmingham and Preston, with a limited service onwards to Glasgow. The last trains will leave Euston mid-afternoon. There will be no Avanti West Coast services to North Wales, Shrewsbury, Blackpool and Edinburgh on strike days

All departures cancelled between Monday and Friday.

In most cases, just three trains in each direction will be running on strike days.

Services ‘significantly affected’ this week, with a half-hourly timetable between 7.30am and 6.30pm on strike days.

On strike days, trains will only run between Doncaster and London King’s Cross.

Around 38% of usual service levels are planned.

‘Some disruption’ to services throughout the week.

No train services and no replacement buses on strike days.

Passengers urged ‘not to travel’ between today and Sunday as services will be suspended ‘on most routes’ during strike days, and there will be a ‘significant impact’ on non-strike days.

Reduced frequency in place, with later first trains and earlier last trains. No services from Stansted to Norwich and Cambridge.