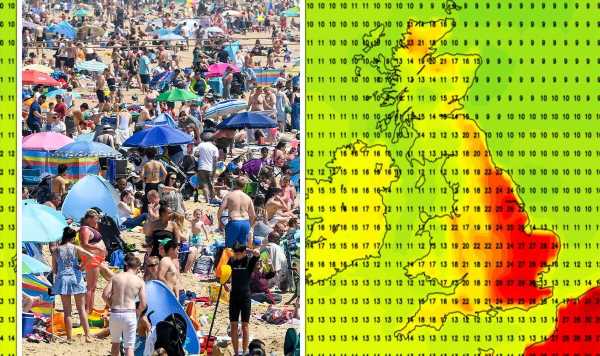 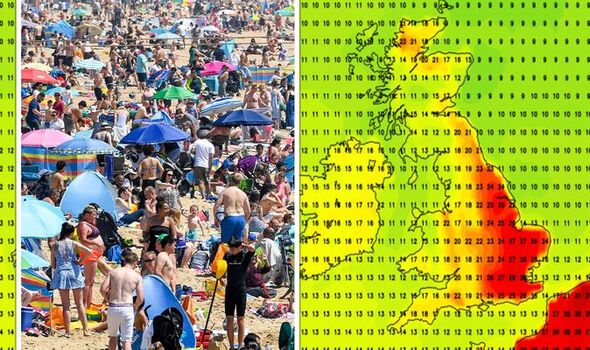 Heat and moisture ploughed into the atmosphere from sweltering air pulled in from the Continent and North Africa will unleash violent downpours and lightning strikes next week.

Although temperatures could nudge 30C through the second half of the month, heavy, thundery downpours could persist into June.

Netweather forecaster Nick Finnis said: “Next week may see temperatures reach perhaps the mid-twenties Celsius in the south as the high eventually shifts east and settles over eastern Europe drawing a very warm deep southerly flow across the U.K.

“Peak temperatures could be Wednesday and Thursday.

“But with the warmth is likely to be rising humidity and instability, with a risk of thundery showers spreading north at times.”

Warm air will be pulled around a huge area of high pressure stretching from the Atlantic Azores islands off the coast of Portugal.

Jim Dale, meteorologist for British Weather Services, said: “After it turns a little bit cooler towards the end of the week, the hot weather will arrive at the weekend.

“The peak of this mini heatwave, which will get going during the latter part of the weekend, should be around Tuesday or Wednesday.

“It will be driven by warm air being drawn into the country around an Azores High pressure system from the Continent.”

Britons face a showery and changeable few days in the run up to the sizzling weekend, according to the Met Office.

Cloudy skies will bring showers to some today with the risk of further rain on Friday.

Met Office meteorologist Aidan McGivern said: “High pressure will be centred over the UK by Saturday, and it will be increasingly warm but before that it is a changeable week ahead with some rain in the forecast.

“Just to the north of the Azores a weather front starts to emerge and gets picked up by the jet stream and it starts to deepen.

“At the weekend high pressure builds over the UK with sunny spells over most of the country and later this high will start to pull up warmer air which is a sign of things to come next week.”

It comes amid early predictions this summer could be shaping up to be one of the hottest on record.

Britain could be in the firing line for five heatwaves over the next four months, according to some independent forecasts.

Sizzling forecasts have prompted bookies to take the axe to raft of hot weather records.

Ladbrokes is offering 5-4 from 3-1 on May steaming into the record books as the hottest ever.

Spokesman Alex Apati said: “There’s an increasing chance this goes down as a record-breaking hot May, with Brits ready to bask in scorching temperatures over the next few weeks.”

Western and southwestern regions will be in the firing line for the worst of the downpours next week.

Thundery downpours threaten to drench parts of the country through the rest of the month, according to the Met Office.

A spokesman said: “With settled weather continuing in the northeast, cloudier conditions, and the possibility of showers, potentially heavy and thundery, may be expected for the west and southwest.

“Towards next weekend, this unsettled weather over the west may spread further eastwards, bringing generally more changeable conditions for most.

“It will be rather changeable through the end of May, with spells of rain or showers for many areas, some of these heavy and thundery.”